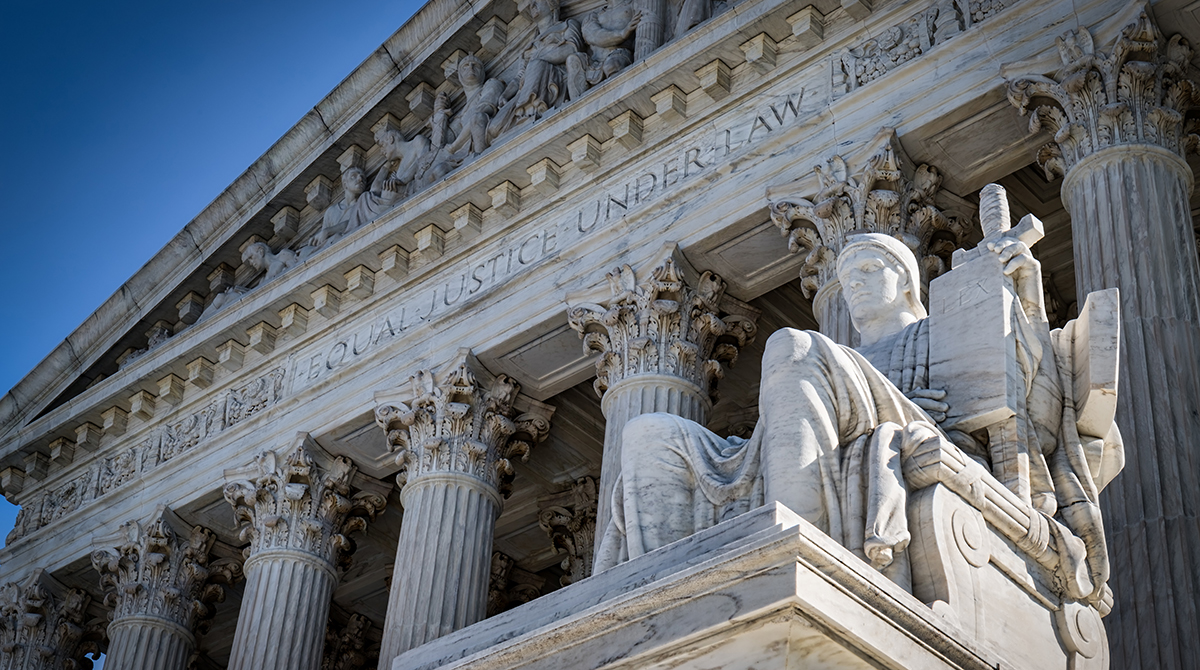 The United States Supreme Court on Jan. 13 blocked enforcement of the Biden administration’s proposed sweeping vaccine rules, which would have required companies with more than 100 employees — including trucking companies — to ensure workers receive a COVID-19 vaccine or undergo weekly testing.

The high court issued a stay of the proposed law, and sent the case back for review to the 6th U.S. Circuit Court of Appeals.

The ruling is a victory for American Trucking Associations, which led a consortium of industry and business groups in challenging the mandate in court.

“Today, ATA has won a tremendous victory on behalf of the trucking industry and workers and employers everywhere,” ATA President Chris Spear said in a statement. “Today’s ruling by the Supreme Court validates our claim that OSHA far overstepped its authority in issuing an emergency temporary standard that would interfere with individuals’ private health care decisions.”

The proposal was issued by the Occupational Safety and Health Administration, part of the Department of Labor.

The high court said the law’s challengers are “likely to succeed on the merits of their claim that the [Labor] Secretary lacked authority to impose the mandate.”

In the 6-3 ruling, the majority wrote, “Administrative agencies are creatures of statute. They accordingly possess only the authority that Congress has provided. The Secretary has ordered 84 million Americans to either obtain a COVID–19 vaccine or undergo weekly medical testing at their own expense. This is no ‘everyday exercise of federal power.’ ”

The stay will remain in place pending disposition of the challenge to OSHA’s order in the circuit court.

In an interview with Transport Topics, Transportation Secretary Pete Buttigieg said, “We’re disappointed. We know that vaccine requirements save lives. But we also know there are a lot of ways to get there. We’re hoping that employers will continue to take every step to protect their workforce and to protect their customers.”

The three justices in the dissenting minority protested the majority’s contention that the mandate represented a limit “found no place in the governing statute.”

They wrote, “The dissent contends that OSHA’s mandate is comparable to a fire or sanitation regulation imposed by the agency,” but noted that a vaccine mandate is “strikingly unlike the workplace regulations that OSHA has typically imposed.”

The vaccine mandate proposal was published by OSHA on Nov. 5, 2021. Scores of parties — including states, businesses, trade groups and nonprofit organizations — filed petitions for review, with at least one petition arriving in each regional Court of Appeals. The cases were consolidated in the Sixth Circuit, which was selected at random to hear the case.

The case was among two of 14 emergency applications the Court heard, which ATA said likely reflected “the seriousness of our arguments and our presentation of the issues makes our application the best vehicle for resolving this complex matter.”

In upholding the stay of the law, the majority wrote, “the equities do not justify withholding interim relief. We are told by the states and the employers that OSHA’s mandate will force them to incur billions of dollars in unrecoverable compliance costs and will cause hundreds of thousands of employees to leave their jobs.”

Legal challenges to the proposal moved quickly through the federal courts.

On Nov. 10, ATA was joined by the state trucking associations from Texas, Louisiana and Mississippi, and a coalition of business groups in filing suit in the U.S. Court of Appeals for the Fifth Circuit, seeking the court to stay and ultimately vacate the mandate. Nearly a week later, this challenge was consolidated with other similar suits nationwide and reassigned to U.S. Court of Appeals for the Sixth Circuit. The Kentucky, Michigan, Ohio and Tennessee Trucking Associations also joined ATA’s challenge.

With today's #SCOTUS ruling, ATA has won a tremendous victory on behalf of the trucking industry and workers and employers everywhere. https://t.co/qn8FrINdj0

A three-judge panel of the 6th U.S. Circuit Court of Appeals ruled 2-1 on Dec. 17 that the OSHA proposal for workers at companies with 100 or more employees could take effect. However, the Supreme Court on Dec. 21 announced it would hear an emergency challenge to that ruling. ATA said that decision to hear the case reflected the Court’s recognition that “the seriousness of our arguments and our presentation of the issues makes our application the best vehicle for resolving this complex matter.”

“For its part, the federal government says that the mandate will save over 6,500 lives and prevent hundreds of thousands of hospitalizations,” the majority wrote. “It is not our role to weigh such tradeoffs. In our system of government, that is the responsibility of those chosen by the people through democratic processes. Although Congress has indisputably given OSHA the power to regulate occupational dangers, it has not given that agency the power to regulate public health more broadly.”

Spear added, “Trucking has been on the front lines throughout the pandemic – delivering PPE, medical supplies, food, clothing, fuel, and even the vaccines themselves. Thanks to this ruling, our industry will continue to deliver critical goods, as our nation recovers from the pandemic and we move our economy forward.”