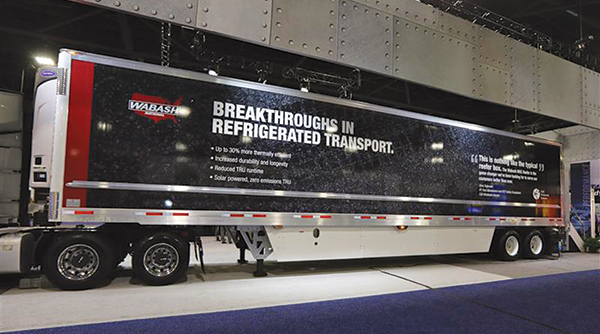 A Wabash trailer at the 2020 TMC conference in Atlanta. (John Sommers II for Transport Topics) 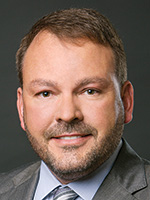 Customers remain confident in the freight environment and continue to replace equipment at a rapid pace, Wabash CEO Brent Yeagy said during a conference call with industry analysts and investors April 27.

Wabash executives outlined confidence in the trailer market as they see changes in freight and logistics growing demand. At the same time, the company has introduced a variable pricing structure that will better protect it from inflation in production costs.

The company is adding employees to ramp up production. It also has worked through the last of its backlog not covered by the new pricing structure, a factor that improved profit margin at the end of the quarter and moving forward, Yeagy said.

“We continue to believe that structural changes driven by e-commerce-related logistics disruption, the entry of new customers for trailers, and the emergence of larger trailer pools will drive extended positive demand backdrop over the next several years,” he said.

“We are seeing private fleets who are really looking to grow their capability and their internal fleet structure to manage their supply chain, and they are really ramping up what they’re going to be buying strategically over the next three to five years,” he said.

At the same time, digital freight brokers and traditional truckload companies moving into the broker space are looking at trailers as a critical link to make the business model work, Yeagy said.

“We have a different type of virtuous cycle that is being created and (changes in) the buying habits and the business model structure of trucking that I think people miss. Wabash is best positioned to be able to take advantage of this,” he said.

Wabash already sees the effect of strong demand for equipment. Its total company backlog at the end of the first quarter stood at $2.3 billion, up $800 million from the same quarter last year. CFO Mike Pettit said the backlog was a first-quarter record and outpaced the prior first-quarter high by 42%.

Wabash’s transportation solutions segment revenue rose 45.5% to $502.1 million in the first quarter from $345.1 million in the same period a year earlier. Operating income for the segment jumped 90.7% to $31.7 million from $16.6 million.

The company raised its outlook for the current year. Wabash said its annual revenue will be $200 million more than its previous estimate and reach $2.5 billion. It raised the forecast for earnings per share by $0.15 to $1.90.

Wabash expects to spend $80 million to $90 million on capital expenditures this year.