Steve Girsky Rises From Matchmaker to Chairman at Nikola 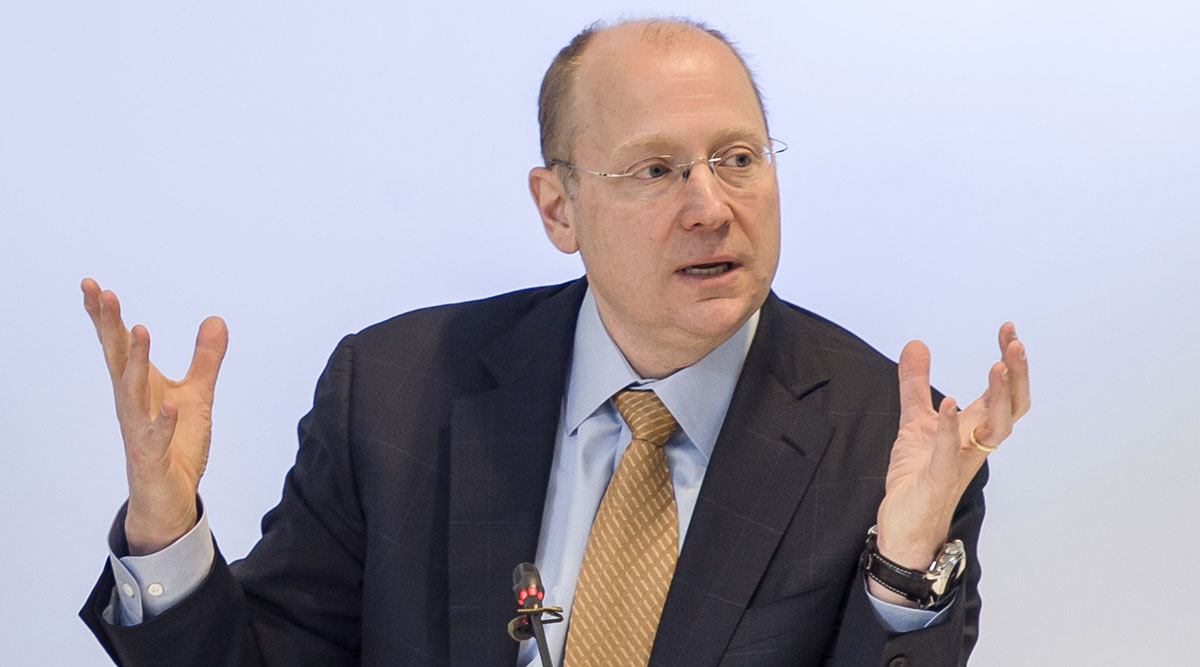 Steve Girsky, pictured here in 2013, will assume the role of Nikola's chairman of the board. (Jock Fistick/Bloomberg News)

With Trevor Milton having stepped down as executive chairman of Nikola Motor Co. Sept. 21, the spotlight now falls to new chairman of the board Steve Girsky.

Back in March, he agreed to a deal — via the blank-check company he runs — to inject a much-needed $700 million into the electric-vehicle startup.

In June, he oversaw Nikola’s public listing through a reverse merger.

And on Sept. 8, he plied his contacts at General Motors Co., the company that employed him for seven years, to orchestrate a partnership valued at $2 billion. 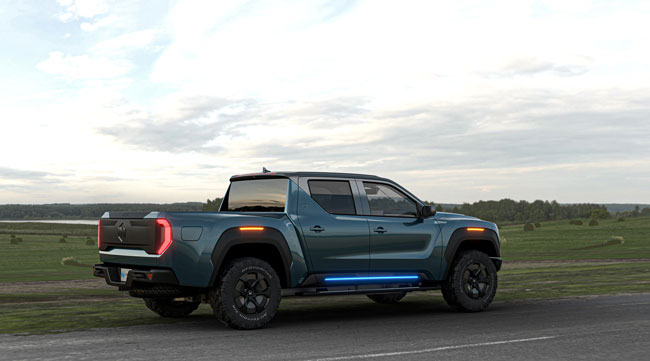 The Nikola Badger pickup truck, which GM agreed to build for Nikola, is seen in a promotional shot. (Nikola Motor Co.)

What came after — the short-seller report by Hindenburg Research that argues Nikola is a fraud — sparked a collapse in Nikola stock, federal investigations and speculation that GM executives failed to do their due diligence on the company. But Girsky, 58, who once served as GM’s vice chairman, is adamant that he thoroughly analyzed Nikola long before bringing a deal offer to GM.

“We showed up with an army of people to due diligence this thing,” Girsky said on an Aug. 2 webcast of Autoline This Week, in which Bloomberg participated. “I don’t doubt there are going to be twists and turns here, but I did put my reputation on the line for this deal.”

It was Girsky, 58, who brought the company to the attention of GM CEO Mary Barra, according to people familiar with the matter. Barra has defended the partnership as properly vetted. She told investors at a conference Sept. 14 she had “a very capable team that has done appropriate diligence.”

The controversy surrounding Nikola and reports the U.S. Securities and Exchange Commission and Department of Justice are examining allegations against the company have put a cloud over the GM deal and threaten to leave the Detroit-based automaker with a black eye. Its decision to link up with the startup comes as it feels pressure from investors to speed up its electrification. 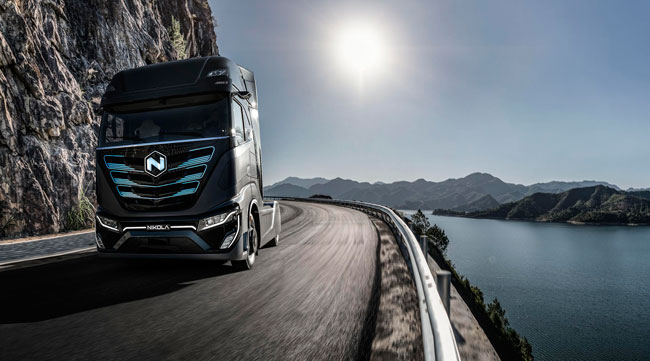 The no-cash deal gave GM an 11% stake in a hot venture that had become a Wall Street darling before the news of Milton’s departure, and provided Nikola an immediate credibility boost — and access to hydrogen-fuel-cell technology and electric-vehicle batteries developed by GM.

Critics and defenders of the deal alike agree on one thing: Nikola is not so much a technology innovator as it is an integrator of off-the-shelf hardware. Even before GM came aboard, Nikola planned to use hydrogen-fuel-cell powertrains supplied by Germany’s Robert Bosch Gmbh in trucks assembled by a venture with Italian semi maker Iveco SpA, which is owned by CNH Industrial NV. But the startup’s model is still untested as it has yet to produce a single commercially available vehicle.

“Most of the important technology is not coming from Nikola,” said Sam Abuelsamid, a transportation analyst at research firm Guidehouse Insights. “Their role is to put it all together. Until they can execute, their market value is ridiculous.” 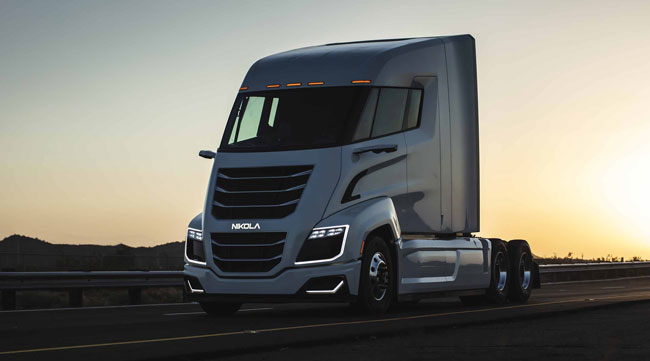 The Nikola Two, a Class 8 powered by a hydrogen fuel cell for the U.S. market, is scheduled to go into production in 2023. (Nikola Motor Co.)

While it had shared in the limelight enjoyed by Elon Musk’s company and run by a similarly social-media-savvy entrepreneur, Nikola is very different from its larger market-cap rival. The Palo Alto, Calif.-based electric-car leader developed the intellectual property for its battery pack in-house and manufactures all its own vehicles.

“That’s the beauty of it. We are a systems integrator. We are not trying to compete on the IP of the truck,” said Nikola board member and investor Jeffrey Ubben. “What we have here is a prototype-and-design company.”

Nikola has raised money mostly based on Milton’s sales pitches and an ambitious vision to become a dominant player in alternative-fuel trucks. More recently, it has been able to parlay its new status as a public company — and Girsky’s connections — to woo GM and gain access to technology it needs to deliver on its many promises to investors.

Chief among those is its Badger electric pickup truck, which Nikola has vowed to start producing in 2022. That’s after GM starts selling its first battery-powered truck, which will put a new spin on the formerly gas-guzzling Hummer brand.

GM will provide the core chassis to underpin the Badger and its assembly-line know-how. But the automaker plans to launch some 20 new electric vehicles of its own over the next three years, which prompts some industry observers to wonder what Nikola brings to the party. The startup’s value comes from its ability to integrate the technology of the company’s diverse network of partners, including Bosch and Iveco, according to Girsky.

“We saw a bunch of partners with deep expertise in the space,” he said in the August Autoline webcast. “And there was some tech embedded in here that was interesting to us and our advisers.”

Nikola does have some of its own technology, such as its eAxle that connects fuel-cell and electric systems to drive wheels. Milton told Bloomberg TV on Sept. 8 that the company he founded also supplies “software, infotainment and the capability of over-the-air updates” for the vehicles.

But the main thing Nikola provides to GM is a dash of derring-do. Nikola has been willing to move faster and take more risks than an established automaker like GM with its layers of management, prudent compliance regimens and conservative corporate culture.

Iveco, Bosch and GM had no plan to bring a fuel-cell-powered pickup to market before Nikola arrived on the scene. Fuel cells are seen by established auto and parts makers as a better alternative for big Class 7 and Class 8 rigs because they use hydrogen to create electricity on board the vehicle. But Nikola plans to offer a $90,000 fuel-cell version of the Badger after its debut as a $60,000 battery-electric model — despite not having any proof a market exists for those types of vehicles. 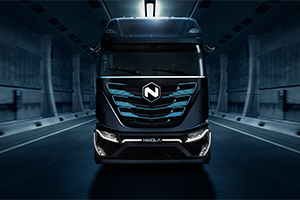 Even though Nikola planned to put mostly Bosch technology into its truck, Milton has talked up his company’s fuel-cell prowess.

“We have the most advanced fuel cell and truck on the planet,” Milton said July 7 during a video appearance that featured a fuel-cell semi-truck prototype he filmed on his cellphone. “Look at that thing. And that’s the technology that’s going in the Badger.”

Milton said in February he’d been “working on this pickup program for years,” but others contest that notion. Nikola’s CEO, Mark Russell, told investors on an August earnings call the company had no plans a year ago to make a pickup. But what had been “just a conceptual exercise” began to jell into a product when buzz grew about Tesla’s Cybertruck, which Musk showed off in November.

“We didn’t intend to do anything with it until we saw the Cybertruck,” Russell said.

As late as March, Nikola told investors it didn’t expect to draw up plans for the Badger unless it could find an established automaker to manufacture it. But by June, it began taking deposits of as much as $5,000 for the pickup — without a prototype to show.

Early conversations between GM and Nikola, which began in late February before Girksy had announced the reverse merger, were preliminary and didn’t result in a deal. But Nikola’s effort to find a partner to build the Badger added momentum to consideration of a possible partnership. Milton said in June that he was talking to multiple carmakers about outsourcing production of the pickup.

Meanwhile, GM moved ahead with its own electrification plans, showing off the Ultium battery in March and boasting it would power a family of vehicles ranging in size and purpose from small crossover SUVs to big Hummer and Chevrolet trucks. GM has begun retooling a plant in Detroit to make the battery packs and common “skateboard” chassis.

For GM, assembling the Badger would help it max out its factories and scale up its electric-vehicle supply chain more quickly. And a fuel-cell partnership would give GM a way to generate revenue from a technology it had co-developed with Honda Motor Co. but had no firm plan for deploying in vehicles.

GM moved ahead after concluding there was no financial downside to a deal. The carmaker gets licensing fees for its technology and for building the Badger — and reimbursement for any up-front costs. The free equity in Nikola is an added sweetener that the automaker hopes won’t turn sour.

Dec. 26, 2017: Tesla CEO Musk says in a tweet his company will build an electric-powered pickup truck after launching its Model Y crossover.

Nov. 21, 2019: Musk unveils a prototype of the Cybertruck to much fanfare

Feb. 10, 2020: Nikola announces its Badger pickup, saying it will be “designed to target and exceed every electric or petrol pickup in its class.” Chairman and founder Milton adds that “Nikola has billions worth of technology in our semi-truck program, so why not build it into a pickup truck? I have been working on this pickup program for years and believe the market is now ready for something that can handle a full day’s worth of work without running out of energy.”

March 13, 2020: In a regulatory filing, Nikola says: “While we plan to obtain components from multiple sources whenever possible, many of the components used in our vehicles will be purchased by us from a single source, especially with respect to hydrogen fuel cells and batteries.” It was believed this would be Robert Bosch, which has had a co-development agreement since 2017 for Bosch to “develop, build, test and support” various components for Nikola prototypes, including a fuel-cell system and battery packs.

May 15, 2020: Milton tweets: “I laugh when articles say Nikola is all talk. 300+ mile battery and 500+ mile fuel cell to be produced by @nikolamotor & @IVECO. These are real. Our tech is years ahead. Production starts next year & Factory being prepped now in Germany. Watch while others follow the boss.” There’s no mention of the fuel cell coming from Bosch.

June 21, 2020: In a LinkedIn/blog post, Milton proudly proclaims Nikola to be the “leader” in battery-electric and fuel-cell-powered semi-trucks, having cracked the economics on which use case is best. But he gives no details about the technology and where it will come from — and he fails to mention that the fuel cell isn’t Nikola’s own.

July 7, 2020: “We have the most advanced fuel cell and truck on the planet,” Milton says during a video that appears to demonstrate a working fuel-cell semi-truck prototype. He runs alongside it to film it on his cellphone. “Look at that thing. And that’s the technology that’s going in the Badger. That’s why I always laugh when people say the Badger is fake.”

July 10, 2020: Milton follows up with a promotional video claiming the Badger will be “unlike any other truck that’s in existence.” He says the fuel-cell version will cost around $90,000, the battery-electric $60,000.

Aug. 4, 2020: Nikola “had a concept for a pickup truck that they had, just in concept, just as a conceptual exercise,” CEO Russell says on the company’s earnings call. “And we didn’t intend to do anything with it until we saw the Cybertruck.”