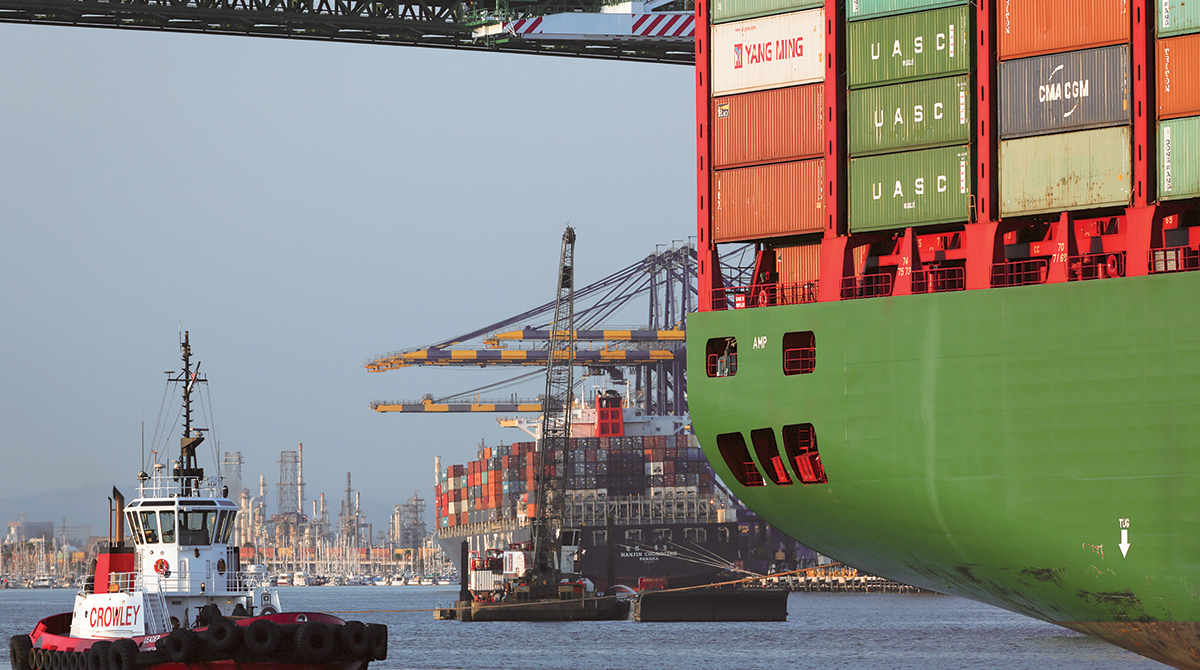 The Port of Los Angeles has suspended plans to charge shippers for containers that have been piling up at the facility, an announcement made the day that Transportation Secretary Pete Buttigieg during a virtual visit pledged support from the Biden administration to help ease stress on the nation’s crowded supply chain.

The backlog of empty containers at the Port of Los Angeles and nearby Port of Long Beach — which also adopted a fine program — has fallen 25% to 71,000 as of Nov. 16 from 95,000 in late October, Port of Los Angeles Executive Director Gene Seroka said during a Nov. 16 news conference with Buttigieg. Because of that reduction, the ports temporarily suspended a plan to charge shippers storage fee surcharges that would increase based on the number of days a container remained at a facility.

Seroka noted the number of ships waiting off the coast of the two ports had dropped from more than 100 to 84.

VIDEO: @SecretaryPete and #PortofLA Executive Director Gene Seroka held a virtual media briefing to discuss the latest developments in the supply chain, including how ports nationwide will benefit from the new Infrastructure Investment and Jobs Act. https://t.co/PbBKmK8nJo pic.twitter.com/4bcO11nay9

“Clearing our docks and empties has been a priority of ours in recent weeks,” Seroka said, who also noted a 29% drop in the amount of cargo sitting at his facility for nine days or more.

Still, in normal times only a handful of ships would be holding offshore, a fact not lost on Buttigieg as he discussed improvements earmarked for the nation’s ports in the wake of Biden’s Nov. 15 signing of the Infrastructure Investment and Jobs Act. The legislation will provide $17 billion specifically for port infrastructure.

“We’re eager to get to work,” Buttigieg said. “We recognize that while supply chains are mainly private sector in America — and rightly so — there are moves that the administration can and must take to help.” Buttigieg said funding for many long-planned transportation and infrastructure projects will begin flowing this year and into 2022.

Seroka and Buttigieg join in a virtual press conference. (Port of Los Angeles via YouTube)

“These are all steps that are going to help improve the flow of goods to all Americans and lay the groundwork for the structural changes that we need,” he said. “It’s a once-in-a-generation set of investments, and it’s the biggest set of investments in U.S. history. We are rapidly working to unlock the potential of this deal with 45-, 60- and 90-day deliverables per the president’s plan.”

Speaking specifically about trucking, Buttigieg touted the DRIVE Safe Act— which was included in the legislation — for opening a door to train drivers younger than 21 to haul goods across state lines.

“We’re looking at what we can do to improve the labor force readiness and workforce in this country,” Buttigieg said. “For truckers, the bill sets up an apprenticeship program that we think encourages more 18- to 21-year-olds to come into the field without having to compromise on safety, using that mentorship and apprenticeship approach to more safely bring more people into the field.”

The next day, California Gov. Gavin Newsom and White House Port Envoy John Porcari joined state officials to tour the ports and discuss projects that could be aided by funding from the infrastructure bill. Newsom noted that USDOT is setting up a competitive grant process to obtain funding, and his state is eying opportunities.

Regarding the driver shortage, Newsom told reporters California is extending hours of operations at 15 Department of Motor Vehicles sites, which will nearly double the number of open slots for commercial driver license testing to 970 a month compared with the previous 500 slots.

Seroka hopes CDL holders who have left the industry will consider a return to trucking.

“We need to bring them back in,” he said. “There is no shortage of folks who have the credentials. We need to get them back into this port drayage system. They’re paid by the turn traditionally, so let’s get them in and out of the ports swiftly so they can deliver the goods. I think once we catch our breath, we’re going to have to figure out a way to look differently at compensation and benefits to accelerate what we want to do to create these professional jobs.”

Newsom also announced that the California Department of Transportation is allowing a temporary increase in the maximum allowable gross weight of trucks beyond the current 80,000-pound limit so more cargo can be transported on state roads from ports to distribution centers. The increased truck weight permits will apply to the entire state highway system, including interstates, and will be valid until June 30.