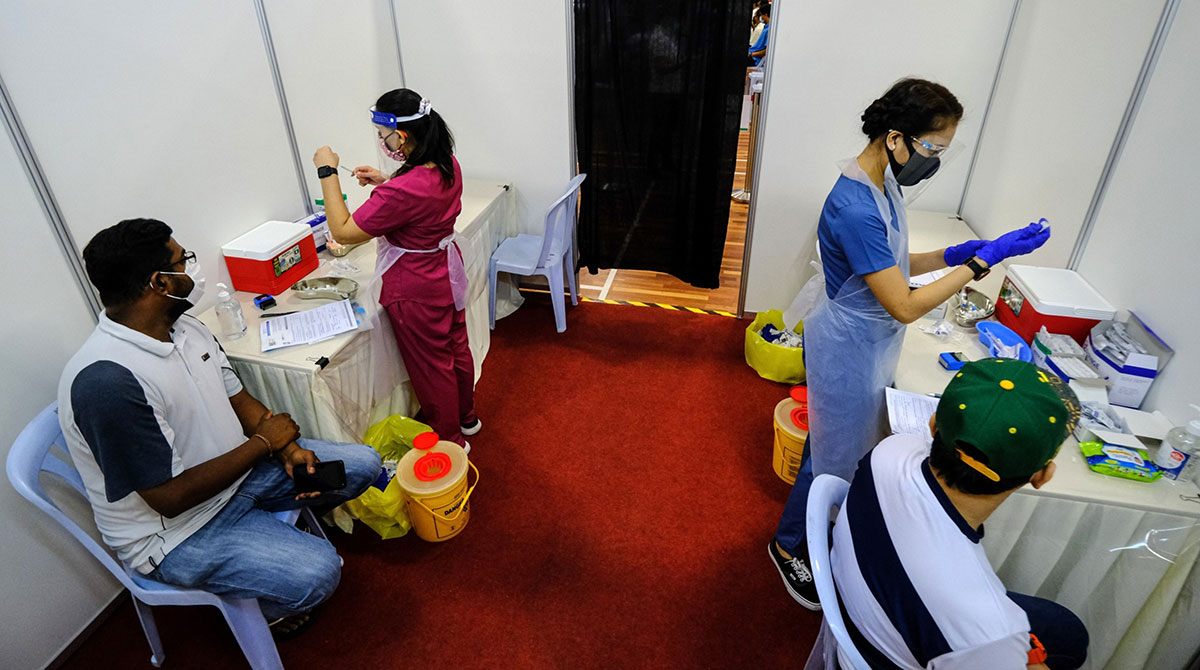 Global vaccinations of seafarers are going too slowly to prevent outbreaks on ships from causing more trade disruptions, endangering maritime workers and potentially slowing economies trying to pull out of pandemic slowdowns.

Infections on vessels could further harm already strained global supply chains, just as the U.S. and Europe recover and companies start stocking up for Christmas. The shipping industry is sounding the alarm as infections increase and some ports continue to restrict access to seafarers from developing countries that supply the majority of maritime workers but can’t vaccinate them.

“It’s a perfect storm,” says Esben Poulsson, chairman of the International Chamber of Shipping that represents ship owners. “With this new delta strain, there’s no doubt it’s setting us back and the situation is getting worse. Demand for products isn’t letting up, crew changes aren’t happening fast enough and governments continue to stick their heads in the sand.”

All signs now point to a worsening crisis on the oceans, just as the industry seemed to be emerging from months of port restrictions that hurt the ability of shipping firms to swap out crews and left hundreds of thousands stuck at sea for months. The risks were brought into focus by two recent events that interrupted essential ports and shipping routes.

In May, a sailor died and dozens of hospital workers in Indonesia were sickened with the delta variant of COVID-19 after a ship with an infected Filipino crew docked. About the same time, global shipping was thrown into chaos after one of China’s busiest ports was shuttered for weeks because at least one dock worker was infected as part of a broader outbreak in Shenzhen.

Gard P&I, the biggest marine insurer among the industry’s more than dozen mutual liability associations, has seen a spike in claims for COVID-19 infections. There were more than 100 outbreaks monthly in April and May that struck vessels and offshore mobile units such as drilling platforms involving multiple sick seafarers in each case, according to Alice Amundsen, vice president of people claims. During the peak of the pandemic in July-August 2020, Gard saw almost 80 outbreaks on vessels and offshore units that infected some 160 people, she said.

“It’s a little bit like a fire that is glowing and it could quickly turn into a firestorm again,” said Rene Piil Pedersen, managing director of AP Moller-Maersk A/S in Singapore. Even as more people get vaccinated, COVID will be around for years and there will still be outbreaks in ports and on ships, he said last month, calling on governments and industry to work together to protect seafarers and dock workers as essential employees supporting critical supply chains all over the world.

Despite efforts in the U.S. and elsewhere to inoculate seafarers in ports, most are still largely dependent on their home countries for vaccinations, and more than half of the 1.6 million seafarers globally come from developing nations such as India, the Philippines or Indonesia, which are well behind most developed economies in vaccinations.

The lack of international coordination can be seen in the fact that there’s no estimate of how many seafarers have actually been vaccinated. That’s because there’s no one organization or company keeping track of the situation for all workers across various companies, ships and ports.

The International Chamber of Shipping estimates only 35,000-40,000 seafarers — or just 2.5% of the global pool — are vaccinated. However, more than 23,000 seafarers had been jabbed in the U.S. with the help of various charities, and China’s Cosco Shipping Holdings Co. said last month that all seafarers who are onshore and are fit for vaccinations have been inoculated.

India has kicked off inoculation programs for its more than 200,000 seafarers, but Poulsson and ship managers, including Wilhelmsen Ship Management, say the drive needs momentum. As of May, roughly 14% of India’s seafarers had received a single dose of the vaccine, and 1% had received both doses, according to the Hindu Business Line, citing an industry estimate.

Many seafarers are having trouble procuring their second dose of vaccines since that is often left to the discretion of local clinics, according to Chirag Bahri, director of regions at International Seafarers’ Welfare and Assistance Network in India.

“The government’s put something on paper to say they’ve made seafarers essential workers, but they are not being prioritized for vaccinations,” Bahri said. “Without a second dose, they really can’t get on a ship.”

In the Philippines, several firms including Maersk have said they’re working with the government to procure shots for their workers. While seafarers get priority access, vaccines are in short supply, with several cities around the capital region of Manila halting vaccination programs in recent days as supplies ran out.

Even if shots were available at home, they’re no good for workers already aboard ships, some of whom many not finish contracts until next year. About 99% of Filipino seafarers are unvaccinated, said Gerardo Borromeo, the Manila-based vice chairman of the ICS, who estimates it will take a year to inoculate them all.

That’s bad news for the shipping industry — the Philippines supplies some 460,000 seafarers, or 25% of the global maritime work force, according to the government. And until more seafarers from all over the world are vaccinated, infections will continue to spike.

The easiest solution would be for every port to have a clinic and offer vaccinations to all seafarers coming through, according to Ben Cowling, head of the University of Hong Kong’s department of epidemiology and biostatistics. So far, that’s not happening in many places, with only a handful of countries following the U.S. lead in offering vaccinations to seafarers who come into ports, regardless of their nationality.

“For parts of the world where they are aiming to eliminate COVID, loopholes including maritime workers at container ports, are opportunities for the virus to break through,” said Cowling. “They have to eliminate the risk coming off containerships.”

And if the risk to seafarers isn’t eliminated, then further port shutdowns or outbreaks on ships taking them out of services will make it even harder and more expensive to get Christmas shopping done.

“We will run out of the available crew,” said Columbia Shipmanagement Ltd. CEO Mark O’Neil, whose company oversees a crew pool of 18,000 people. “They would either have COVID, or they will be part of a COVID-infected crew, or they will not be vaccinated and therefore will not be allowed into a port. The number of vessels operating will be reduced.”