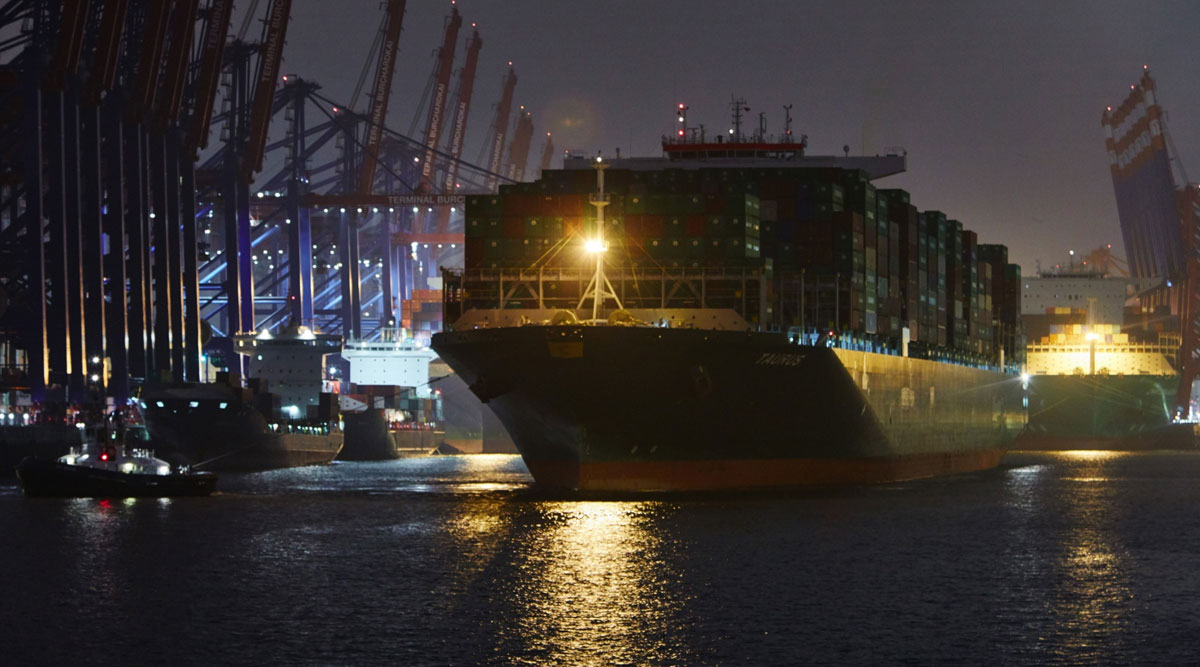 Container ship Taurus, operated by Evergreen Marine Corp., sits with cargo at the Port of Hamburg in Germany on Nov. 10. (Dominik Reipka/Bloomberg News)

About 90% of the world’s physical trade is moved by ship, and the sector spews about as much CO2 into the atmosphere as Germany and France combined. On Nov. 17, the International Maritime Organization approved rules aimed at cleaning up the industry by improving vessels’ carbon efficiency.

Some countries and nongovernment organizations said the measures were inconsistent with the Paris Agreement. The IMO’s much more ambitious target — to halve shipping’s outright emissions by 2050 — wasn’t a central part of the discussions. 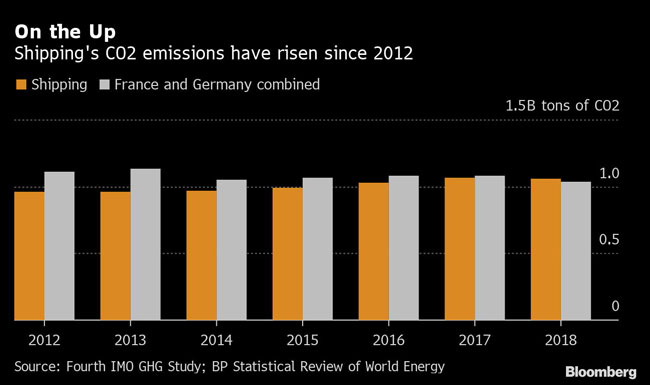 The new rules “will never take us anywhere near the absolute reductions that we need to achieve by 2050,” said Maria Skipper Schwenn, executive director at Danske Rederier, which represents Danish shipping, adding that the regulations are a stumbling block for a real transition to carbon neutrality because they don’t reward ships for performing well.

The Nov. 17 measures were officially aimed at hitting a 40% reduction in carbon intensity by 2030, the IMO’s shorter term target. Since the goal’s baseline year of 2008, ships have gotten bigger, better designed and slowed down, meaning much of the required savings have already been achieved. The industry was already on track to hit the 2030 target, according to Tristan Smith of the UCL Energy Institute.

The far bigger challenge is shipping’s outright emissions. As the world’s fleet grows to service ballooning international trade, having more efficient vessels won’t necessarily be enough to bring CO2 down.

To keep to the Intergovernmental Panel on Climate Change’s 1.5 degrees Celsius scenario, man-made CO2 output needs to almost halve, versus 2010, by 2030. The IMO isn’t targeting an outright cut by then, though it is due to revise its strategy in coming years.

The Nov. 17 agreement “will not set shipping CO2 emissions on a pathway consistent with the Paris Agreement goals,” Transport & Environment, a nonprofit, said in a statement.

The U.K. and Germany were among at least half a dozen countries that criticized the measures.

Hitting the IMO’s plan for a 50% cut in greenhouse gas emissions by 2050 will require much of the world’s fleet to switch to zero-emission fuels that don’t yet exist at a commercial scale. Making the transition will cost more than a trillion dollars, according to the Global Maritime Forum. Strong regulatory incentives are needed to drive that investment.

Not everyone seems willing to wait for the IMO to legislate. Next year, the European Union is due to propose rules to put a price on emissions from shipping, likely by bringing maritime transport into its emissions trading scheme. It may have the support of the world’s biggest operator of refined fuel carriers, Maersk Tankers.

The firm supports a global carbon tax, an approach that’s favored by commodities trading giant Trafigura Group. But if the IMO can’t make that happen, Maersk Tankers earlier said it would support the EU’s proposal.

“If the choice is between having nothing and having EU ETS, I support EU ETS,” said Christian M. Ingerslev, chief executive of the company, which is separate from transport firm A.P. Moller-Maersk A/S, in an interview last week. “If you sit there and wait for the perfect solution, you risk going nowhere.”

The International Chamber of Shipping, which represents more than 80% of the world’s merchant fleet, opposes regional regulation, as do fellow industry trade groups BIMCO and Intercargo.