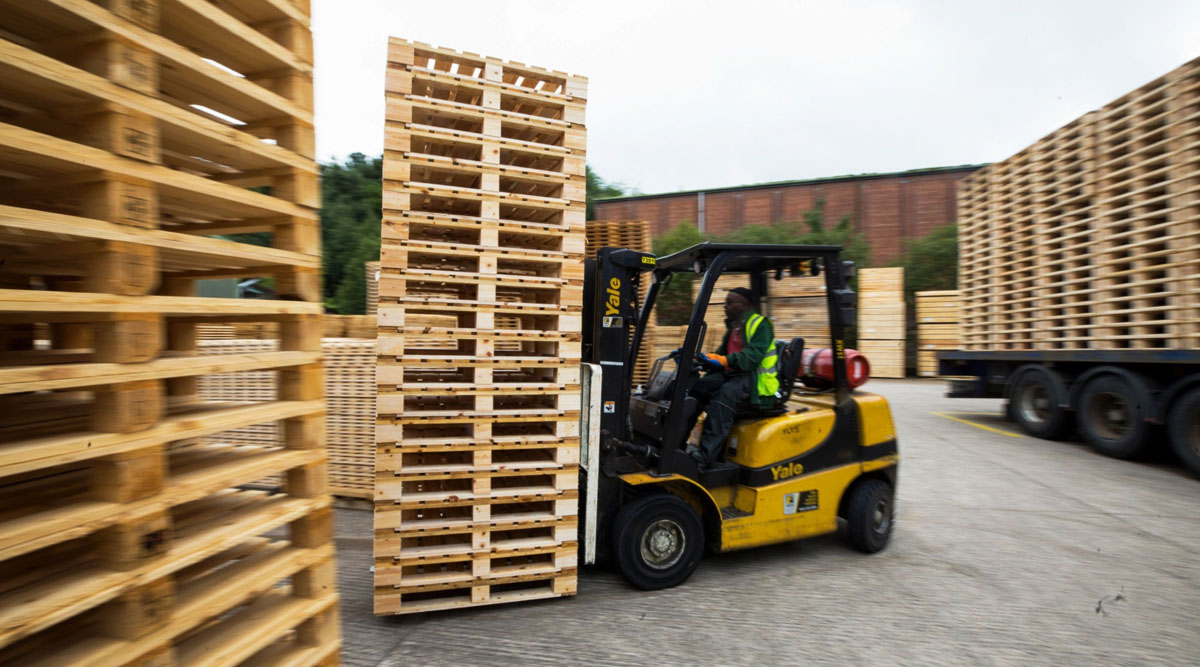 After carrying the weight of the global economy since World War II with little fanfare, the lowly shipping pallet is finally commanding some respect.

Demand for the platforms used to haul nearly every consumer good or industrial ingredient is soaring amid a surge in e-commerce, forcing retailers and manufacturers to expand warehouses or pile inventories higher. At the same time, two keys to production — cheap lumber and labor — are scarce, and even nail costs are rising.

The result: Pallet prices have hit record highs, according to a U.S. Labor Department index, and European gauges show big jumps from the U.K. to Germany. The market may stay hot through the peak construction season in the springtime and as COVID-19 vaccines help revive restaurants and event venues — adding to inflationary pressures rippling across supply chains.

“Supply is just barely keeping up with demand,” said Howe Wallace, chairman and CEO of PalletOne Inc., a Bartow, Fla.-based producer with facilities across the Southeast. “It’s a pretty dicey situation.”

At Virginia Tech’s Center for Packaging and Unit Load Design, the nation’s foremost pallet laboratory, “the companies we work with, every single one of them, said they’ve had their best year,” said Associate Professor Laszlo Horvath, the center’s director.

Pallets serve as the base of a so-called unit load, a standard way to ship products so they’re easy to move with forklifts and jacks. They are generally bought or leased by product makers and get baked into transport packaging costs. When a retailer or other end user is finished with pallets, recycling companies collect, repair and resell them. Some industries like bottling companies manage their own pallet pools. 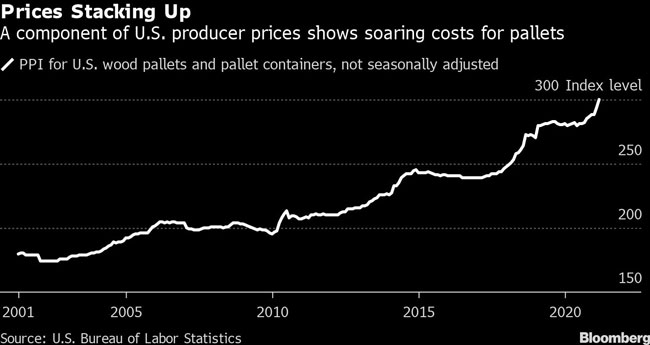 There are roughly 5 billion pallets in use worldwide, and an estimated 2 billion in the U.S. alone — enough to go two-thirds of the way to the moon if stacked on top of each other. About 90% are wooden and the rest are made of plastic, metal or cardboard. Each year, some 513 million new wood ones are built in the U.S. and another 326 million are repaired and put back in circulation, according to Horvath.

Depending on the region, the usual price tag of $9 to $12 per wooden pallet may approach $15 this year. On April 9, U.S. government data showed the wood-pallet component of the producer price index jumped in March by the most since 1993.

Pallets are made with a lower grade of hardwood and softwood than the timber used for construction and furniture. In the mid-Atlantic region, the price of pallet-grade hardwood rose to $635 per 1,000 board feet in March from $530 a year earlier, and a Southern California softwood more than doubled, to $520. Meanwhile, nail prices gained between November and March along with a 36% jump in the cost of wire rod, Brindley said.

Adding to the squeeze is a dearth of workers willing to do the tough job of constructing pallets. “The market’s right for a second shift, but there are no people to add a second shift,” Wallace said. 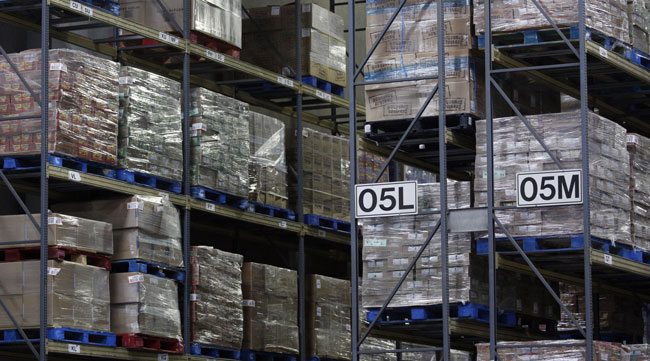 Pallets of groceries sit stacked on shelves at a Kroger Co. distribution center in Kentucky in March 2020. (Luke Sharrett/Bloomberg News)

Such strains would seem to provide an opening for plastic pallets, which are lighter, built to last longer, easier to sanitize, and pose fewer hazards like splinters and protruding nails. The downside to plastic pallets: They’re about three times more expensive, meaning a shift from wood to plastic turns what most companies view as throw-away packaging into pricey assets that need to be managed.

Before the pandemic, the overall pallet market was growing at about 5% to 7% annually.

“After the pandemic we believe that’s even higher,” said Jeff Pepperworth, CEO of Orlando, Fla.-based iGPS Logistics, the U.S.’s largest plastic-pallet pooler. “We are seeing, especially in the plastic-pallet space, there’s more demand than there is supply.”

The wood-pallet lobby has heard such arguments before about their venerable product. “Companies will always look to build a better mousetrap,” said Brent McClendon, president and CEO of the Alexandria, Va.-based National Wooden Pallet & Container Association. “They keep coming back to wood.”

With lumber prices so high, the logistics world is intrigued by a pilot program this year using plastic pallets by Costco Wholesale Corp., the Issaquah, Wash.-based chain of warehouse stores where pallets are fixtures on the sales floor. In an email reply to questions about the trial run, Costco Chief Financial Officer Richard Galanti said “we wouldn’t have any comments.”

The leasing company working with Costco is CHEP, a unit of Sydney-based Brambles Ltd. that traces its history to Australia’s role in World War II.

Brambles CEO Graham Chipchase indicated on a conference call in February that CHEP — known for its pool of bright-blue wooden pallets — is proceeding cautiously into the plastic variety so it doesn’t weaken the wood business.

“Because plastic pallets are so much more expensive than wooden ones, we feel that if this is a solution for Costco, we don’t think it’s likely to spread across the whole system quickly because of the price premium,” Chipchase said.

Marshall White, a Virginia Tech professor emeritus and a developer of pallet-design software, said it’s reasonable to expect plastic could reach 10% of the market over the long term, from about 5% to 6% now.

“Wood pallets will continue to dominate, until the time that we find the physics to dematerialize toilet paper at Procter & Gamble and rematerialize it in my house with some magic device,” he said.