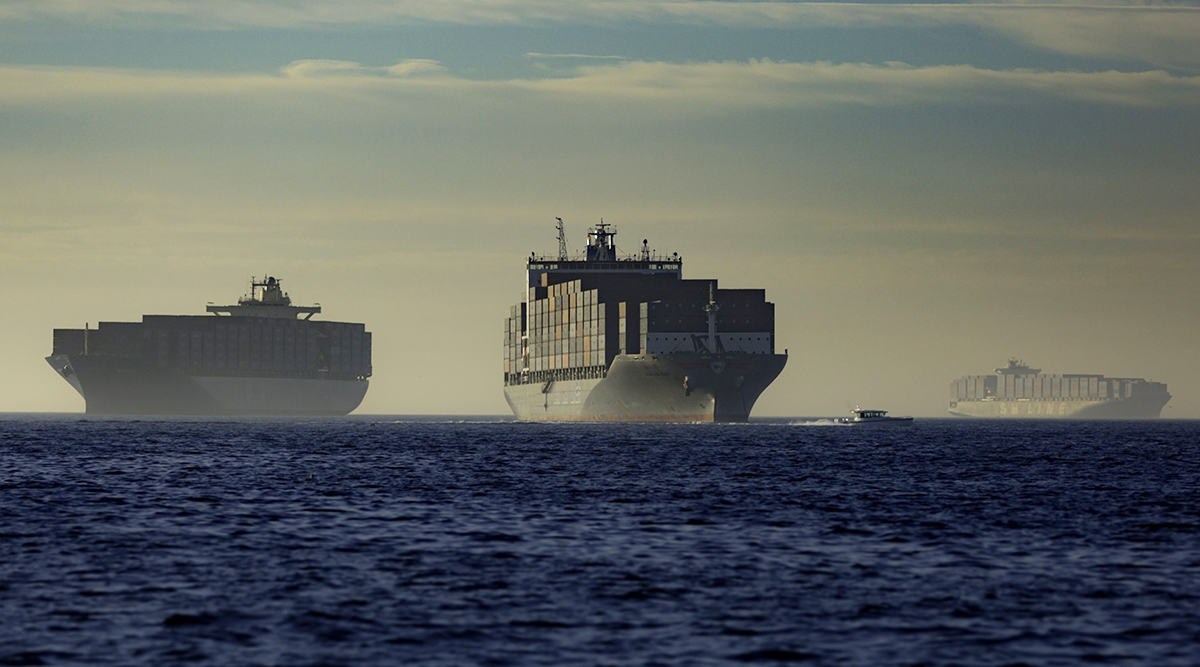 Containerships at anchor outside the Port of Los Angeles. (Tim Rue/Bloomberg News)

U.S. supply chains have a chance to return to more normal operations after retailers replenish inventories next quarter, even if the next peak shipping season arrives sooner than usual, Port of Los Angeles Executive Director Gene Seroka said Feb. 9.

“Most retailers continue to tell me they’ll use quarter two to replenish inventory, get that safety stock at a more comfortable level,” Seroka said on Bloomberg Television. “Then we’ll have a chance if we hit these two marks properly to pivot into an earlier-than-normal peak season in early June or July.”

Seroka said he agrees with the chief executive of a major container line, A.P. Moller-Maersk A/S’s Soren Skou, who told Bloomberg TV in a separate interview earlier that ocean shipping should start to normalize in the second half of the year. Maersk, which handles almost one-fifth of the world’s container traffic, said it sees a 2% to 4% expansion in the market this year, with a strong first half followed by an uncertain outlook after that.

At the Port of Long Beach, which together with the Los Angeles port handle 40% of seaboud imports, the executive director was less optimistic on the outlook.

Mario Cordero, in a briefing on Feb. 9, cited the unpredictability of the pandemic and historic import volumes as challenging factors.

“We’ll be hard-pressed to see more than small gains until perhaps in the fall,” Cordero said. “We need to recognize that the supply chain isn’t so elastic that it can easily handle historic jumps in volume.”

In the interview, Seroka predicted upcoming labor negotiations between dockworkers, taking place between the International Longshore and Warehouse Union representing them, and the Pacific Maritime Association, representing port operators and shipping lines, would go smoothly and not cause disruption.

“I’m optimistic you’ve got professionals on both sides of the table. These dockworkers need to get paid what they’re worth,” he said. “There are several other issues that need to be tackled. I think everyone understands what’s at stake here.”

There are early signs of improvement. As of late Feb. 8, the number of container carriers in the official queue to enter the neighboring ports of Los Angeles and Long Beach totaled 78, the lowest level since November and down from a peak of 109 a month ago, according to the Marine Exchange of Southern California.

Sea-Intelligence, a Copenhagen-based maritime data and advisory firm, released a report Feb. 9 suggesting it could take eight or nine months to iron out the disruptions causing record-low reliability in container shipping. The National Retail Federation issued a statement saying imports through the nation’s congested ports are expected to grow modestly during the first half, but continued high volumes will keep pressure on supply chains.

— With assistance from Guy Johnson and Kailey Leinz.