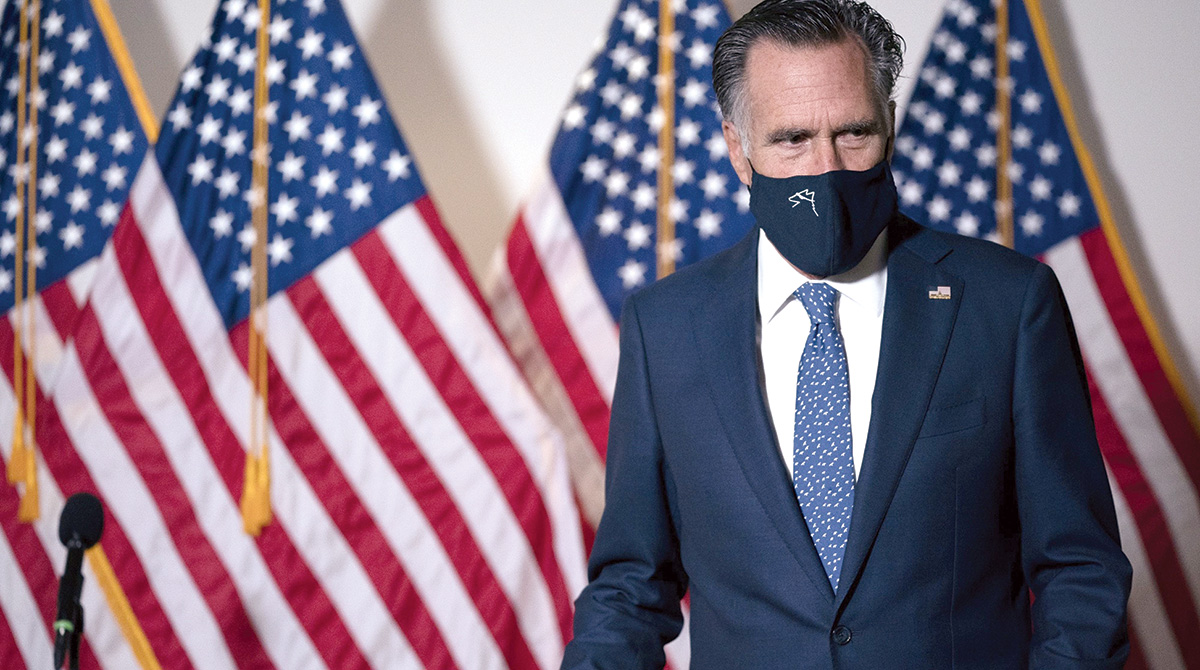 Sen. Mitt Romney (R-Utah) said the package does propose that the gas tax be indexed to rise at the rate of inflation. (Stefani Reynolds/Bloomberg News)

WASHINGTON — A bipartisan group of senators is eyeing an infrastructure deal with $579 billion in new spending as negotiators try to strike a nearly $1 trillion deal on President Joe Biden’s top priority, according to those briefed on the plan.

The 10 senators have been huddling behind closed doors, encouraged by Biden to keep working on the effort after he walked away from a Republican-only proposal this week unable to resolve differences. The senators are briefing their colleagues privately and cautioned changes still could be made.

“Our group — comprised of 10 senators, five from each party — has worked in good faith and reached a bipartisan agreement on a realistic, compromise framework to modernize our nation’s infrastructure and energy technologies,” the senators said in a joint statement.

“This investment would be fully paid for and not include tax increases,” they added. “We are discussing our approach with our respective colleagues, and the White House, and remain optimistic that this can lay the groundwork to garner broad support from both parties and meet America’s infrastructure needs.”

The White House said Democratic senators briefed the administration on the emerging plan but questions remain.

“The president appreciates the senators’ work to advance critical investments we need to create good jobs, prepare for our clean energy future and compete in the global economy,” Deputy Press Secretary Andrew Bates said. “Questions need to be addressed, particularly around the details of both policy and pay-fors, among other matters.”

The president and Congress have been straining to reach an agreement on his ideas for an infrastructure investment, stuck over the scope of the package of road, highway and other projects and how to pay for it. Lawmakers say the group’s tentative agreement represents important progress in fashioning a bill that can pass such an evenly divided Congress this year, but they also are aware that it could easily unravel.

A person familiar with the negotiations but unauthorized to discuss them publicly said the cost would be $974 billion over five years, as is standard for highway spending, or $1.2 trillion if spread over eight as Biden proposes. At that size, the new package would be more than the previous Republican-only effort of $330 billion in new spending in a $928 billion package, but still short of the $1.7 trillion over eight years Biden is seeking.

It appears the group is running into the same problems that Biden and lead Republican negotiator Sen. Shelley Moore Capito confronted in agreeing on how to pay for it.

Sen. Bill Cassidy (R-La.), a lead negotiator, would not disclose the final tab. Asked if the new spending was at $600 billion, he said “The president said that was his goal. So I don’t think anybody felt like they had to exceed his goal.”

Another member of the group, Sen. Jon Tester (D-Mont.), said they are “fairly close” on a top-line amount but are still debating how to pay for it. One option is to include potential revenue from uncollected income taxes, he said.

“We still have to talk,” Tester said.

One Republican not in the group, Sen. Mike Braun of Indiana, said he was told the package would provide nearly $1 trillion — including $579 billion in new spending over the baseline for transportation projects.

Braun also said parts of it would be paid for with untapped COVID-19 relief funds, which has been a nonstarter for the White House.

“They have come up with similar to what I think Capito was working on, but my understanding is it would be a little more money,” he said.

Biden tasked the senators to keep working as he set out for his first overseas trip after talks collapsed this week with Capito and the GOP senators.

The president is seeking a sweeping investment in not just roads, highways and bridges but also broadband, electric vehicle charging stations and other aspects of what he views as the new economy, paid for with a hike in the corporate tax rate from 21% to 28%.

Republicans prefer a more narrow focus on fixing existing transportation systems, with more modest investments elsewhere. They oppose tax hikes to pay for the new spending, and while the 10 lawmakers said the package would not include tax increases, Sen. Mitt Romney (R-Utah) said the package does propose that the gas tax be indexed to rise at the rate of inflation. The federal gas tax, now at 18.4 cents per gallon, has not increased since 1993.

The White House has made clear that indexing the gas tax for inflation or imposing an electric vehicle mileage tax would be nonstarters. They would violate the president’s red line against raising taxes on Americans who earn less than $400,000 a year.

With the Senate narrowly split, 50-50, and most legislation requiring 60 votes to advance past a filibuster, Biden is seeking a bipartisan agreement to ensure passage. At the same time, he is instructing Democrats who control the House and Senate to prepare to pass portions of the package on their own, under special budget rules that enable approval with 51 votes in the Senate.

In the evenly-divided Senate, Vice President Kamala Harris serves as a tie-breaking vote.

Meanwhile, a House panel advanced legislation early June 10 that serves as an important building block for that chamber’s infrastructure efforts. The bill aims to boost federal spending on roads, bridges, transit and rail. The $547 billion package passed mostly along party lines by a vote of 38-26 and likely will be considered by the full House later this month.