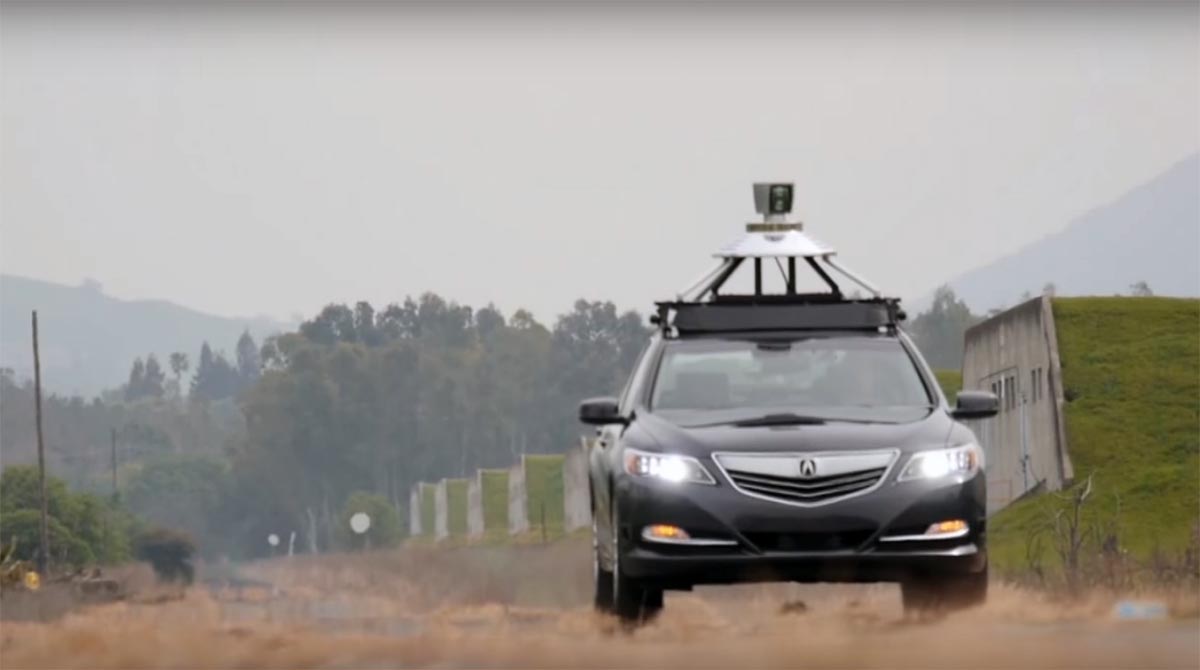 The empty runway stretching before Mark Hendrickson extends so far that its edges vanish in the heat shimmer of a broiling Central Valley afternoon.

Presidents have landed here, back when it was the center of a bustling Air Force base. Aerial firefighters battling blazes in the Sierra foothills touch down here to refill their tankers with water and flame retardant before taking off for another run.

But Hendrickson, Merced County’s economic development director, has a very different use in mind for the former Castle Air Force Base near Atwater. Its massive tarmac and little-used streets could make an ideal test track, he says, for the self-driving cars being developed two hours away in Silicon Valley.

Part of it already is. Google leased a 91.5-acre chunk of the base in 2014, sealing it off from the rest with a black fence. Now, white Chrysler minivans topped with sensors run daily tests through a maze of refurbished streets, complete with a rain tunnel to simulate bad weather.

“When Google came in here, it opened up a number of eyes,” Hendrickson said. “Other industry leaders started coming to us as well and saying, ‘What if?’”

The base could allow automakers and tech companies to put autonomous cars through the kinds of tests they can’t easily or safely do in public: situations where cars must navigate the same oddly shaped intersection over and over again, or where they must evade other cars intentionally darting into their way.

“This is a very large piece of concrete — a lot of things could happen here,” Hendrickson said, admiring the two-mile-long runway. “It’s off the beaten path, and you’re not going to bother anybody.”

Silicon Valley, a land of labs and corporate campuses, never had need for automotive test tracks — until now. While 39 companies have received permits from California to run their autonomous vehicles on public streets, the companies also want enclosed places where they can experiment without endangering or annoying pedestrians and drivers.

So far, two facilities have emerged to meet the need.

Google, whose self-driving unit now goes by the name Waymo, uses Castle, and Hendrickson said several automakers stand poised to follow suit, though he declined to name them.

Meanwhile, Honda, Uber and two other companies test their vehicles at a former naval base outside Concord. Renamed GoMentum Station by Contra Costa County officials, the old Concord Naval Weapons Station features a cluster of old buildings that can simulate a small town, while the streets linking rows of munitions bunkers can mimic a city grid.

Officials at each facility say they don’t consider the other competition. There’s more than enough demand to go around.

“Anything we can do to accelerate this technology, we’ll do,” said Randell Iwasaki, executive director of the Contra Costa Transportation Authority, which runs GoMentum Station. “There’s definitely a need for secure test beds. You can’t close down a city street and run the same maneuver over and over again without people complaining.”

Iwasaki first hit upon the idea after then-Contra Costa County Supervisor Susan Bonilla told him to take a look at the old weapons depot and figure out ways it could generate jobs.

“As soon as I got out here, I thought this would be an amazing test facility,” Iwasaki said. “It’s clean, it’s wide-open and it’s guarded by the military.”

On a tour of the station this spring, Iwasaki noted how the base’s abandoned buildings, long straightaways and occasional quirks could all serve as interesting tests for robotic cars. A “mini-city” comprised of former barracks, the officers club, a firehouse and a chapel serves as an ideal stand-in for a town, minus the people. As he spoke, a red autonomous shuttle from French company EasyMile slowly circled the white-washed buildings.

“You have buildings, trees, shadowing, sidewalks — everything you need,” Iwasaki said.

Two tunnels nearby show companies how their cars behave when cut off from GPS signals. A long, straight road, meanwhile, has been re-striped to look like an interstate highway. An autonomous big rig from Uber’s self-driving truck division, formerly known as Otto, rumbled back and forth. Not far away, Honda engineers had set up a portable traffic light next to a row of grass-covered bunkers.

At 5,000 acres, the sprawling base is big enough that multiple companies can test there at once without peering over each other’s shoulders. (Chinese Internet giant Baidu also uses the site.) Locked and guarded gates keep out the public, creating a wide-open space populated by fat, burrowing squirrels, flocks of wild turkeys and very few humans.

Although both Concord and the county have long-term plans to redevelop much of the site with housing, offices and parkland, Iwasaki says a portion will be reserved for GoMentum. The station may someday serve as a way to lure tech companies into opening offices there.

“We want those jobs to keep some of our people, so they don’t have to drive south on Interstate 680 every morning,” Iwasaki said.

The need for jobs drives Castle’s redevelopment as well.

The base closed as a military installation in 1995, and the county took over ownership in 2006. The Castle Commerce Center, as it’s now known, has about 80 tenants, including a startup designing rocket engines and a UC Merced office researching drones.

While old barracks pocked with shattered windows dot parts of the base, the entire facility has working water, electricity and sewer services, as well as broadband Internet. Waymo, Hendrickson said, even rehabbed some of the buildings into dorms for its engineers.

Waymo declined to let a Chronicle reporter tour its facility.

Hendrickson credited Google with having the idea of using part of the base for self-driving research.

“We did not envision that — it was a little bit of luck,” he said.

Now, however, he sees all the ways that other companies could use Castle for the same purpose. The base features intersections where roads meet at strange angles — potentially confusing a self-driving car. Large hangars can store cars, so companies don’t need to constantly bring vehicles to and from the base.

And for foreign automakers, the airstrip can allow easy access for visiting company executives. Although part of the strip may be redeveloped, most of it will stay open for air traffic.

Hendrickson, however, doesn’t just want Castle to serve as a testing facility. Merced County’s unemployment rate stood at 9.7% in July, and the county wants some of the old base used for manufacturing. Castle competed to host Tesla’s battery Gigafactory, but lost out to a site near Reno.

“Are we going to be a place that builds rockets,” Hendrickson said. “Probably not. But can we be a place where components of rockets are built? Absolutely.”

That said, Hendrickson believes Castle can play a key role in keeping California at the forefront of the autonomous vehicle industry.

“While Detroit has been, historically, the global epicenter, the reality is that California has a unique opportunity to be the epicenter for the 21st century,” he said. “And we fully intend to be part of that.”