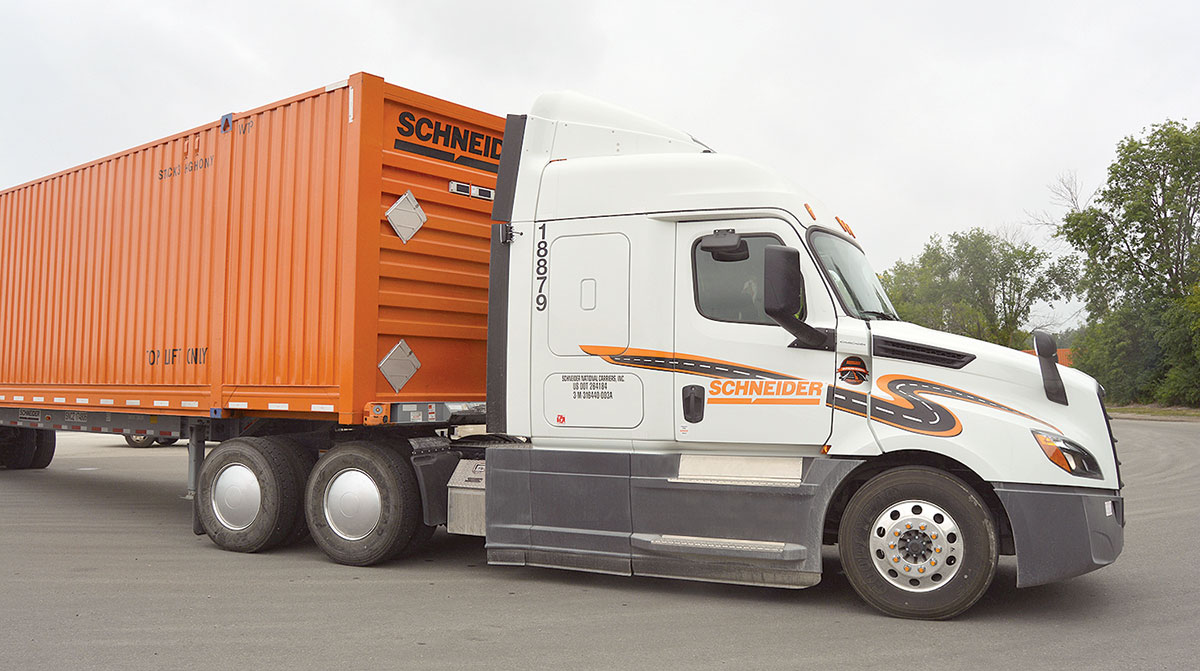 Schneider's third-quarter profit climbed to $110 million from $44.5 million in the 2020 period. (Schneider National)

The Green Bay, Wis.-based truckload, intermodal and logistics services provider reported net income increased to $110 million, or 62 cents a diluted share, for the three months ending Sept. 30. That compared with $44.5 million, 25 cents, during the 2020 period.

“The third quarter represented the most profitable period in our history,” CEO Mark Rourke said. “We continue to effectively utilize our scaled and diversified platform to deliver solutions for the rapidly changing needs of our valued customers. I’m proud of our team’s performance and want to express special appreciation to our professional driver community.”

The results were slightly above Wall Street expectations, which called for 51 cents per share and quarterly revenue of $1.39 billion, according to Zacks Consensus Estimate.

“We anticipate that the freight conditions of the third quarter will be sustained through year end and likely through 2022,” Rourke said. “As we prepare for the upcoming year, our plans include ongoing investments in technology and trailing assets that will further expand the reach of our asset-light and non-asset offerings while providing a seamless customer experience.”

The truckload segment reported that Q3 revenue increased 5%, to $484.4 million from $460.2 million in the year-ago period. Schneider said in the report that the increase primarily was due to effective revenue and network management and dedicated growth, which partially was offset by lower truckload network fleet count and lower miles per tractor. Truckload revenue per truck per week increased 15% to $4,060.

Truckload income from operations increased 87%, to $85.1 million from $45.6 million last year. Revenue and network management, gains on the sale of revenue equipment, and cost alignment initiatives during the quarter more than offset lower utilization and higher driver and related costs.

Intermodal segment revenue increased 19%, to $295.7 million from $248.4 million during the prior-year quarter. The results were due to increased revenue per order and volume growth mainly in eastern operations. Revenue per order increased 20% to $2,624. Container fluidity remained challenged in the quarter as a result of extended dwell times at customer locations and rail network disruptions.

Intermodal also saw income from operations increase 99%, to $45.7 million from $23 million. This was driven by the same factors impacting segment revenue, which partially was offset by increased rail and dray driver costs.

The logistics segment reported revenue increased 67%, to $474.6 million from $284.4 million. The Schneider FreightPower load board was able to help the company increase its spot mix and supportive market conditions. The company also noted that brokerage volumes grew 24% year-over-year primarily due to its advancement of digital capabilities and power-only service.

Logistics income from operations increased 143%, to $22.1 million from $9.1 million. This primarily was due to increased net revenue per order and volume growth.

Schneider ranks No. 7 on the Transport Topics Top 100 list of the largest for-hire carriers in North America, and No. 15 on the TT list of the Top 50 logistics companies.