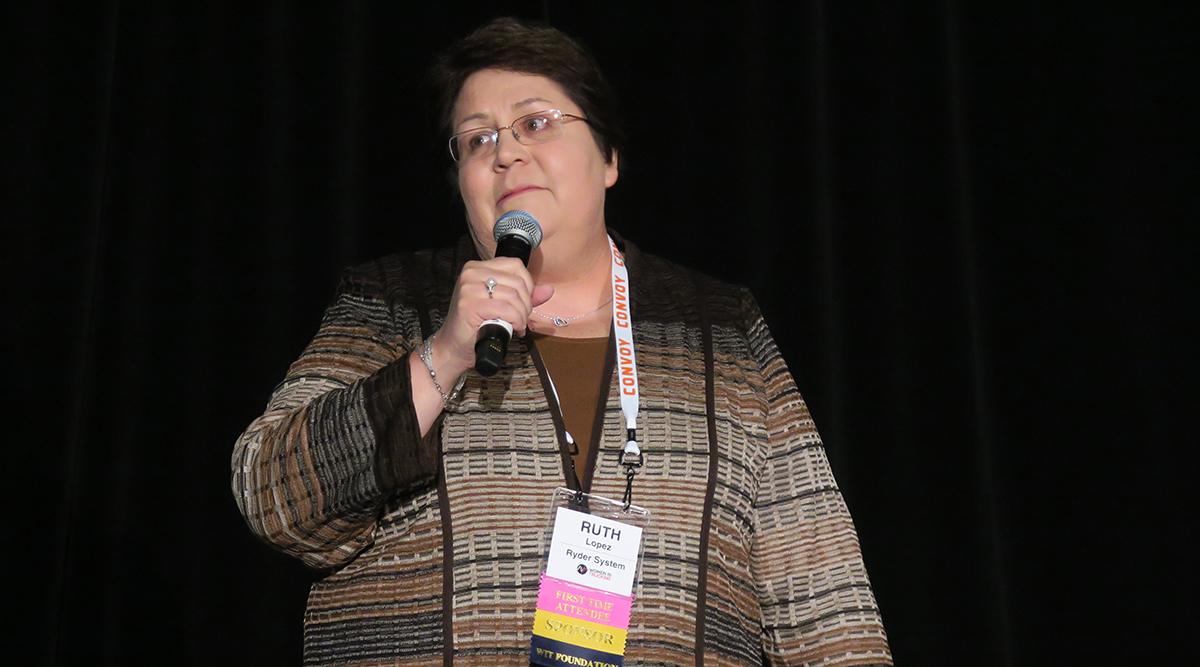 Presented by the Women In Trucking Association, the honor recognizes women in the industry who make or influence key decisions, have proven records of responsibility and serve as role models. The recipient was announced at WIT’s annual conference Oct. 1.

Lopez runs transportation teams in Novi, Mich., where she’s based, and Mexico. Visibly emotional upon receiving the award, Lopez admitted she was feeling overwhelmed to have won.

“It’s fantastic,” Lopez told Transport Topics. “Certainly being named was unexpected but very much appreciated, and I’ll take it forward with great pride.”

Ruth Lopez, recipient of the Influential Woman in Trucking award

Lopez has worked for Ryder for 20 years in the brokerage and third-party logistics divisions. She credited her parents with teaching her and her two brothers the importance of doing the right thing.

Speaking before a crowd of 1,100 conference attendees, she urged listeners to take advantage of the opportunities that are presented to them and ask for positions of responsibility. For example, she said she asked one of her early bosses if she could run a second distribution center, and he assented.

“Although opportunities have been presented to me, I have also recognized you have to go create your own opportunities,” Lopez said. “You have to ask.”

One of Lopez’s favorite roles at Ryder was running the company’s Women’s Leadership Forum for three years. She said she was sad to turn that position over at the end of her term.

Less than 10% of truckers are women. Even though the transportation industry is predominantly male, Lopez encouraged women who may be considering the industry to give it a shot.

“Try it. You’re only going to know if you’re going to like it if you try it,” Lopez said. “You’re going to find that you do because, once you get in it, you latch onto it, and you’re passionate about it. Eleven-hundred women are here because they enjoy it.”

WIT developed the award in 2010 as a way to honor female leaders in trucking and to attract and advance women within the industry. It was presented by Kary Schaefer, general manager of product marketing and strategy for Daimler Trucks North America.

This year marked the first time there were six finalists. Normally, there are three.

“It was not an easy decision,” WIT President Ellen Voie said.