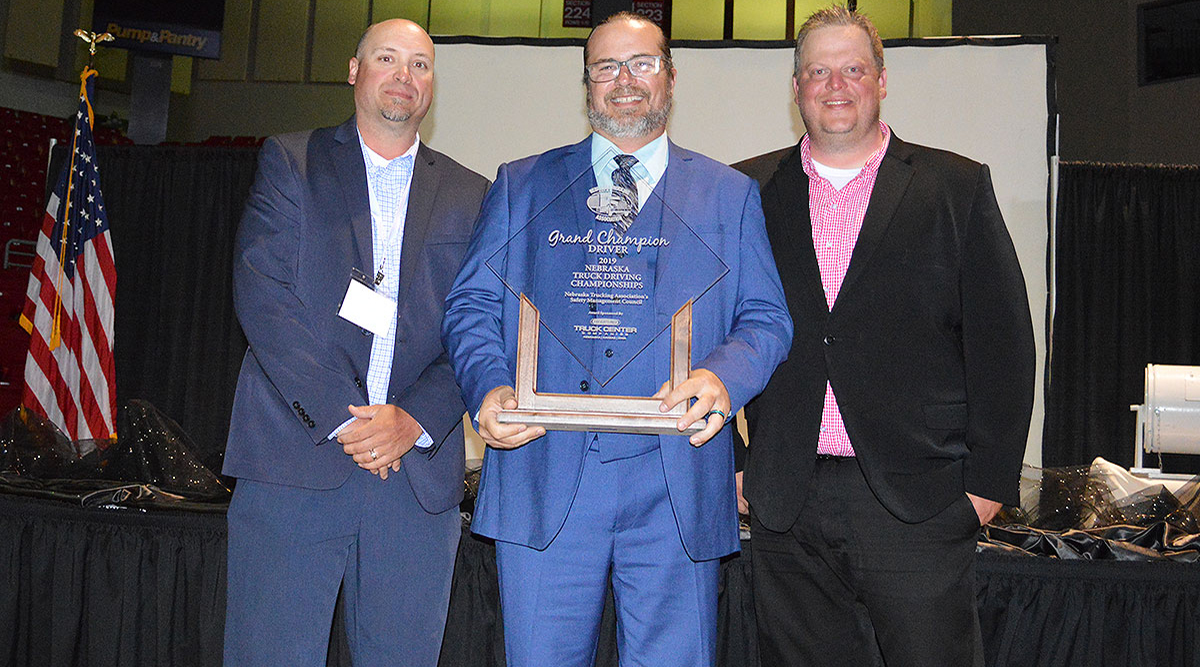 Eric Stein’s grandfather always used to tell him, “Find something you love to do, and then find somebody to pay you to do it.”

Stein found just that seven years ago when he started driving for Werner Enterprises.

And it turns out he not only loves driving, but he’s also incredibly skilled at it.

It was an absolute surprise. I was in complete shock — just overwhelmed with joy.

In his first year of competing, Stein, 49, dominated the field at the Nebraska Truck Driving Championships, winning the Rookie of the Year Award, the 3-Axle division, the Grand Champion Award and the Professional Excellence Award for the highest score on the written test.

He triumphed over 85 participants at the competition held May 31-June 1 at Fonner Park in Grand Island.

“It was an absolute surprise,” he said. “I was in complete shock — just overwhelmed with joy.”

Stein is actually not from Nebraska. He lives about 1,200 miles east in Canajoharie, N.Y. However, Werner is based in Nebraska, so he made the trek from his home on the East Coast to compete.

Stein’s path to becoming a truck driver was anything but typical. Previously, he worked in the restaurant industry for 20 years, working his way up the ladder from busboy to waiter to bartender to prep cook and finally, to executive chef. Eventually, he bought a wholesale meat company and used his connections to sell meat to restaurants.

But in 2009, he lost everything during the recession.

“I ended up selling everything for pennies on the dollar,” Stein said. “I declared bankruptcy and started over.”

This time, he decided to completely change his career trajectory and join the trucking industry.

Stein earned his commercial driver license in 2011 and started driving with Werner and has worked there happily ever since.

Stein said he went from “owning my own business to losing everything to gaining it all back.”

In fact, he gained more than just a career — he also met the woman who would become his wife, Jennifer. She was a waitress and manager at a truck stop that Stein went to almost every day.

“I was her pain-in-the-butt customer from Long Island, and she was this nice little country girl from upstate New York,” he said. “One thing led to another, and we got married on the beach in Maui last year.”

Stein is looking forward to bringing his wife to next year’s Nebraska championships, which he said were much more family-oriented than he expected.

“I didn’t realize there was this whole big family atmosphere,” Stein said. “They had tents set up outside, everybody was cooking, and it was a really good time.”

Now Stein is thrilled to have the opportunity to test his skills at NTDC in August. His goal is to memorize the “Facts for Drivers” book and to get a perfect score on the written test.

“If you want something, you have to put in the effort to get it,” Stein said. “It’s my first time, so if I don’t do well, it’s fine. But if I could do really well, that would be outstanding.”

He has also been practicing for the pre-trip procedure every day as well as practicing different types of scenarios that might come up in the driving course portion of the competition. Although preparing for NTDC and being a truck driver in general takes a lot of hard work, Stein doesn’t view it that way.

“I’ve found a career that I love,” he said. “It’s something I really enjoy doing — I just happen to get paid to do it.”