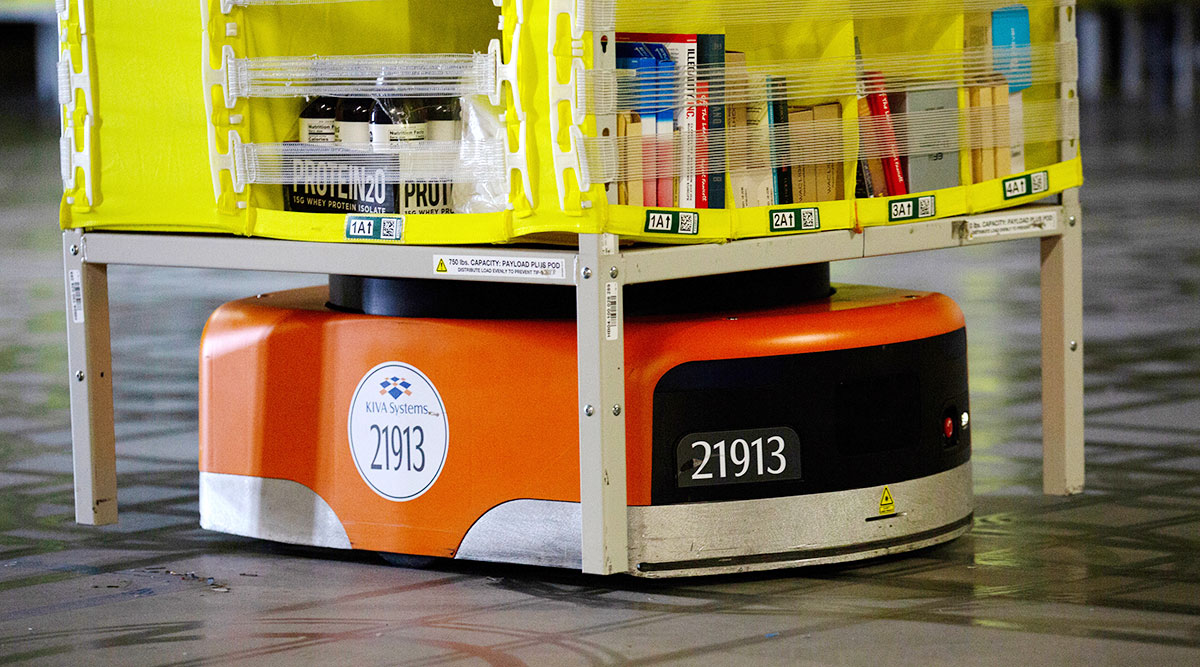 Tephnee Usher stands in a McDonough warehouse, separated from the stored goods by a black chain-link fence, and waits for robots to deliver the goods to her.

Human workers are confined to opposite edges of this 17-acre roofed space: delivery bays and shipping bays about a football field apart. The vast concrete area between them belongs to 225 electric-powered, eerily silent robotic Butlers that perform tasks people used to do.

E-commerce, growing at 15% a year, is driving a second boom in Georgia’s robust warehousing and logistics industry, which employs about 118,000 packers and material handlers across the state. Companies that set up ready-to-ship warehouses here last year included Target’s furniture line, Wayfair home furnishings and Dynacraft bikes and scooters. Amazon has four “fulfillment” centers scattered from Braselton to Macon.

It’s clear the industry is changing. What’s less clear is how much that will translate into a jobs boom or bust as automation and artificial intelligence increasingly take over the work.

The robot-powered warehouse in McDonough just south of Atlanta will begin operations in June after test runs. It belongs to Verte, a Sandy Springs start-up aiming to compete with Amazon.com. Verte targets mom-and-pop to midsize sellers, offering to help them track, keep inventory, sell and move their goods ranging from shoes to cosmetics from manufacturer to home. 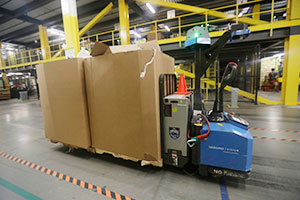 The low-slung Butlers are manufactured by GreyOrange in Alpharetta, the American headquarters of the Singapore company. It can retrofit any warehouse with a flat floor into a roboticized one that can endlessly reconfigure its movable shelves for maximum efficiency. Products that arrive at one door can be stocked and on their way to buyers in as little as two hours, touched by human hands only two or three times.

The Butlers at the McDonough warehouse look like giant Roombas, the disc-shaped robotic vacuum cleaners. They glide among 6,000 refrigerator-size shelving units lined up in rows 85 deep between the delivery and shipping bays. They roll precisely under a unit holding an item someone has ordered, jack it up with enough electric power to lift more than 3,000 pounds and move it to the waiting Usher, a human picker. Usher then grabs the item out of one of its bins, scans it and hands it to team members who pack it and label it for shipping to a customer’s home.

The warehouse is cutting edge when it comes to automation. But it isn’t alone. E-commerce giant Amazon is adding highly roboticized warehouses across the nation similar to Verte’s. The closest one to Georgia is in Jacksonville, Fla., which uses movable shelving units and scooter-like robots that look like GreyOrange’s.

Repetitive work, like warehouse jobs, is widely predicted to be among those more vulnerable to disappearing thanks to robots and artificial intelligence. At the same time, new jobs are created through the industry’s growth and adoption of technology. Programmers and robot mechanics now are on staffs, but they typically take more education or skills. There is unsettled debate about whether continuing technological and social changes will create as many jobs as those shorn off.

Number of robots in Amazon's warehouses:

Packing goods for shipping is often tedious work at low pay, which has led to employee turnover and unfilled jobs. With the unemployment rate below 4%, there also are fewer available workers. Indeed.com lists more than 6,000 warehouse jobs in Georgia, the bulk of them paying $25,000 a year or less.

“On the one hand, we can be concerned about the job loss, but on the other hand, many of the jobs are not great jobs,” Green Leigh said.

Georgia long has been a logistics and warehousing center. Atlanta has the sixth-most warehousing space among metro areas, with 683 million square feet. It is home to companies such as UPS Inc. and Manhattan Associates, and has major operations for big global logistics providers such as XPO Logistics. Hartsfield-Jackson International Airport is a cargo hub, and Savannah is the fourth-busiest U.S. container port in the United States, connecting Georgia businesses to the world. The state boasts excellent rail and interstate access.

At Usher’s work station, Butlers scoot to her, line up and move in unison past her as she picks goods from bins. A laser focuses a point of light on the bin holding the item. A screen shows her what to pick and pack for the next order.

Cut off the lights, the Butlers don’t care. They don’t need light to do their jobs 24/7, and the warehouse could operate with lights only over the picking stations, said Padhu Raman, Verte’s chief product officer.

If a particular item trends up suddenly in sales, the system figures out that the Butler should drop the shelving unit close to a picking station. That saves time in transporting it when the next order comes in.

The dance of the shelving units delivering goods to pickers allows them to select an item a minute. If the McDonough warehouse reaches capacity, it will be able to ship 200,000 items in a 24-hour period, helped by 400 human pickers, packers, supervisors and technicians.

Verte will start using about half the warehouse floor for 60 customers and add workers if the business grows.

Tye Brady, chief technologist for Amazon, said even mom-and-pop operations can sell to customers worldwide through the internet, helping drive growth at Amazon, too. And with that growth comes new jobs.

How people and robots team up on your Amazon order https://t.co/TqB2DVVahJ — Jose Luis (@joseluisintwite) May 29, 2019

Brady describes the jobs in a virtuous cycle: Rising demand and new technologies create new jobs, even as older jobs are shed. Collaborative robots take on dangerous tasks, such as heavy lifting, saving workers from injuries and making them more productive.

Low-skilled warehouse work is not well paid, the average job paying about $13 an hour, according to the Georgia Department of Labor. And the work can be arduous. Before mobile delivery robots, pickers could walk up to 12 miles a day finding and moving items, said Leigh, the Georgia Tech professor.

But the drive for efficiency means companies also are searching for additional ways to replace humans with robots. Amazon and GreyOrange say they have built and are perfecting picking robots — the same job that Usher is doing at Verte’s McDonough warehouse. Amazon also has a test delivery program in Washington state, where a wheeled robot traveling on sidewalks is delivering packages to doorsteps, and has made investments in self-driving vehicles, including shipping trucks.

The question is whether robots can perform some of the least desirable aspects of the jobs and make companies more efficient, creating enough new and higher-paying jobs from the savings. A lot depends on how well educators and companies prepare workers for the new jobs that will be opened up by the inevitable changes.

“We are not there on that yet,” Leigh said.

The Future of Warehouse Building Is Urban