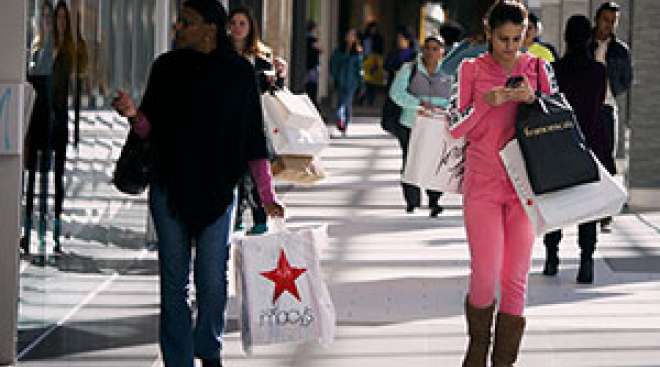 Retail sales rose more than forecast in May, showing consumer spending will help boost economic growth in the second quarter.

The 0.5% increase in purchases followed a 1.3% jump the previous month that was the biggest gain in a year, Commerce Department figures showed June 14 in Washington. The median forecast of 81 economists surveyed by Bloomberg News projected a 0.3% advance. Excluding purchases of autos and gasoline, sales climbed 0.3%.

Steady gains in consumption will help the economy accelerate from a soft patch at the start of the year, bolstering forecasts by Federal Reserve officials that the slowdown would prove temporary. A pickup in wages generated by continued increases in employment will help ensure households remain a mainstay of the economic expansion.

“This is a very strong spring quarter for consumer spending,” said Stuart Hoffman, chief economist at PNC Financial Services Group Inc. in Pittsburgh and the best forecaster of retail sales over the past two years, according to data compiled by Bloomberg. It adds to evidence that the economy “is bouncing back pretty solidly.”

Estimates in the Bloomberg survey ranged from gains of 0.1% to 0.7%. Retail sales data for March and April were unrevised.

Nine of 13 major categories showed increases in demand in May from the prior month, led by a 1.3% jump at non-store retailers, which include online merchants. Sales also rose 1.3% at sporting goods stores and 0.8% at clothing stores, marking the biggest advance since November.

Automobile dealers’ sales increased 0.5% in May after a jumping 3.1% the prior month. That’s roughly in line with figures earlier this month that showed U.S. vehicle sales were little changed in May from the month before.

Receipts at gasoline stations climbed 2.1% last month, the retail sales report showed. The Commerce Department’s retail sales data aren’t adjusted for prices, so higher fuel costs can boost filling-station receipts. The cost of an average gallon of regular gasoline was $2.38 as of June 10, the highest level since September.

The figures used to calculate gross domestic product, which exclude categories such as food services, auto dealers, home-improvement stores and service stations, increased 0.4% in May after rising 1% the previous month, which was the biggest advance in two years.

Economists are counting on households to lead a rebound in the U.S. after first quarter growth was hamstrung by slowing consumption growth and a slump in business investment. Analysts surveyed by Bloomberg from June 3 to June 8 saw growth climbing at a 2.5% annualized rate in the second quarter after a 0.8% pace in the first three months of the year.

Fed policymakers are keeping tabs on growth as they determine when their next interest-rate increase will be appropriate. May’s weak payrolls report led many economists to conclude that a hike at the Fed’s June meeting, taking place June 14-15, would be unlikely.

Another report June 14 showed inflation was starting to stir. The costs of goods imported into the U.S. climbed 1.4% in May, the biggest gain in four years, according to data from the Labor Department.

While the advance was paced by a 16.2% surge in fuel costs that was the largest since 1999, prices for other items were also starting to strengthen. Non-fuel imports cost 0.3% more last month, the biggest gain since March 2014.