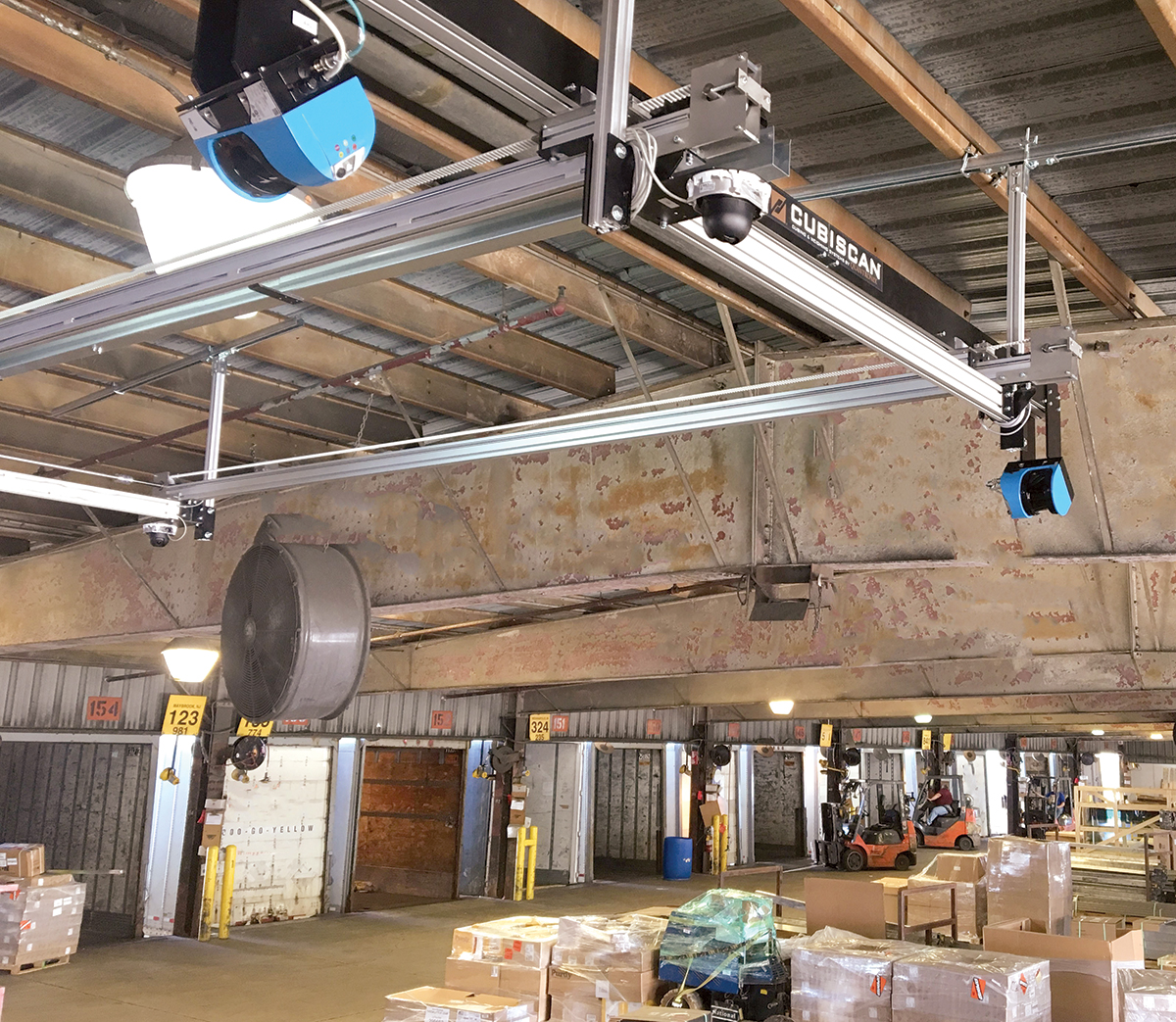 A freight dimensioner installed on the ceiling of a loading dock. (CubiScan)

The less-than-truckload industry is embracing dimensioning technology to enable more accurate freight pricing and automate what used to be manual tasks.

Increasingly, LTL carriers are implementing dimensioners on their loading docks and within their terminals to quickly and precisely measure the length, width and height of pallets to determine or validate pricing.

Dimensioners can obtain this information in seconds, and the data are immediately stored in the carrier’s database. They also offer a camera option to take overhead images.

“It’s a very simple system,” said Webb Estes, vice president of process improvement at Estes Express Lines. “A sensor unit is installed on the ceiling of the dock, centered over an outlined scan measuring area or landing zone on the floor of the dock. The system can tell if there’s something occupying the space, and measurements are certified to within a half inch.”

A dockworker uses a forklift to drive the freight up to the landing zone, positions the freight under the scanner in the center of an outlined area and backs the forklift away.

“Each scan takes up to 6 to 7 seconds,” Estes said. “Dimensions and photos are automatically recorded and stored in the cloud.”

Although the vast majority of freight the company handles is on a pallet, shipments in virtually any form can be scanned in the landing zone. 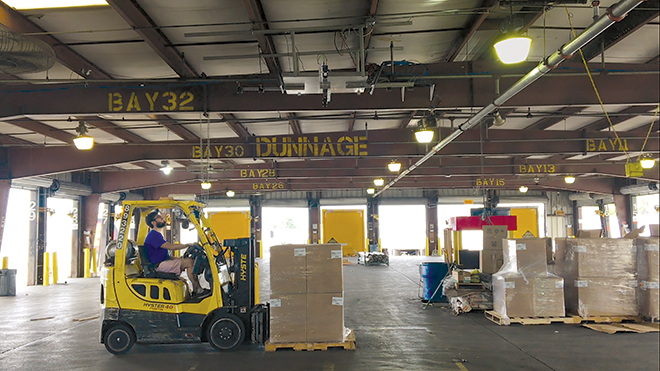 “It’s easy and quick to use, and we have multiple units at our facilities, so there are no long waiting lines,” he said.

As of late October, Estes Express was using 129 dimensioners, with 27 units on order for 16 new locations, Estes said. “We dimension a little more than 35% of our freight.”

YRC Worldwide also has invested in technology to better measure the dimensions of the freight it distributes. The Overland Park, Kan.-based LTL carrier uses 88 dimensioners.

“We’ve been dimensioning freight for three years,” said Darren Hawkins, president of YRC Freight, the company’s national LTL business unit. “Before we had this tech­nology, we had personnel who measured shipments manually with tape measures.”

YRC Freight dimensions about 40% of its freight on a daily basis, Hawkins said. The company uses computer algorithms to determine which freight to dimension and where the dimensioning occurs.

“All of our distribution center forklifts have computers,” Hawkins said. “As the forklift operator on the dock unloads the shipment, the computer directs the operator to the dimensioner. In big facilities, there’s more than one dimensioner, so it would direct him to the closest one.”

As YRC moves a shipment, it may pass through multiple facilities equipped with dimensioners.

“The software will chose the most efficient time to do it based on the activity at the individual facilities,” Hawkins said. “Naturally, we don’t want a dock­worker sitting and waiting on a dimension machine.” 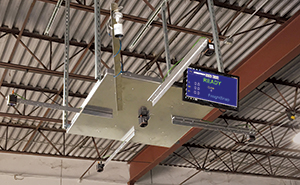 YRC Worldwide ranks No. 5 on the Transport Topics Top 100 list of the largest for-hire carriers in North America. Estes Express, based in Richmond, Va., ranks No. 14.

The data captured by dimensioning systems are yielding multiple benefits for LTL carriers.

“It’s definitely helping us to refine our costing model to make it more accurate,” Estes said.

“Whether it’s determining the load planning or the delivery routing, the dimension data has quickly become an invaluable component of many of our internal programs,” Hawkins said. “It feeds into almost every system that we use to run the company on a daily basis.”

The data collected by dimensioners also can play a role in contract discussions with shippers.

“If a customer’s contract for ongoing freight is going to be coming up for renewal, we might dimension all of the freight under that contract for 90 days prior to the renewal date,” Hawkins said. “That gives us very accurate information for pricing the freight on the renewed contract.” 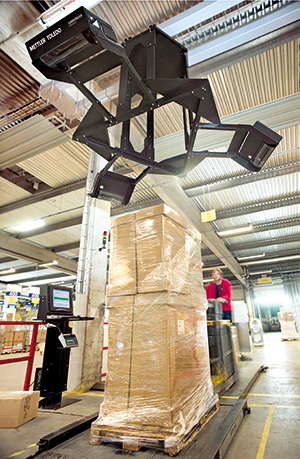 Pricing accuracy is one of the fundamental reasons to use dimensioning technology. Carriers lose revenue when they ship freight that takes up more space than the shipper originally had indicated.

“The data helps us ensure that we’re costing accounts properly for the space that is used on our trucks,” Hawkins said.

“UPS continuously evaluates its processes to ensure the best possible service,” Topel said. “Dimensioners are a valuable part of that equation because of their ability to accurately represent the critical information needed to provide the correct price on freight shipments.”

“The dimensional scanners allow us to capture incremental revenue on shipments that are density-based commodities as well as capture information for our costing system so we can more accurately develop pricing for our customers,” he said.

The dimensioners used by Oak Harbor Freight Lines process about 8% of the company’s shipments.

“We have randomizing programs which flag different shippers each day as we attempt to build a density profile on our entire book of business,” said Troy Jensen, the fleet’s director of pricing.

The main reason Oak Harbor uses dimensioners is to ensure shipments are priced correctly according to their density and the space they utilize, Jensen said.

“At this point, we don’t use the data for load planning,” he said, “but that is a topic we have discussed and will be looking into.”

Jason Wiley, business manager for transport and logistics at Mettler Toledo, explained how the technology works.

For most customers, the dimensioning apparatus is attached to the ceiling or a column in the building, he said.

Dimensioning heads that spread out in three directions send lasers at the object. The light is reflected back and detected by the photo detector in the dimensioner’s laser finder.

Sensors detect how long it takes the light to reflect back from various points on the pallet, which enables the system to determine the dimensions of the object on the docking floor below.

“The entire workflow — bringing the pallet over to the dimensioning area, entering the [tracking] number, conducting the scan and moving on with the pallet — might take around one minute,” he said.

The CubiScan system uses dual laser sensors that pass over the freight from end to end like a set of eyes, CubiScan Chairman Clark Skeen said. “This allows full-coverage scanning and eliminates shadowing, allowing the dimensioner to see five of the six sides of a load.”

CubiScan systems also are scalable, he said. “We can easily expand its length, width and height measurement capacity.”

Carriers can use the data to optimize asset utilization by ensuring that proper-size trucks and trailers are allocated, Skeen said.

“This, in turn, helps with aggregate asset allocation, resulting in less fuel usage, reduced wear and tear on vehicles and highways, and a greener environment,” he said.

Dimensioners can handle freight that comes in all shapes and sizes, and not just on a pallet, FreightSnap CEO Michael Eichenberg said.

“Often we must measure crates, boxes, heavy equipment and other freight that is irregular and not palletized,” he said.

Carriers can use other tools alongside dimensioners to help with operational efficiencies, Eichenberg said. “For instance, FreightSnap has developed a product that will dimension the interior of a trailer as it is being loaded, thereby providing management data and actual images of the loading process.”

Besides carriers and shippers, third-party logistics firms are affected by the adoption of dimensioning technology.

“Dimensioners make our business easier,” said Michael Doyle, vice president of sales and marketing at Diversified Transportation Services, “because when the client claims a shipment was not 72 inches tall, we can get a picture from a carrier in a matter of moments and show them that their pallet was indeed 72 inches tall.”

PNG Worldwide CEO Patrick Glavce said shippers might estimate the size of a load based on the dimensions of the boxes and the number of boxes, while forgetting to add the extra inches of the pallet.

“Once you get the accurate dimensions, the cost for the shipment goes up,” he said. “Dimensioners give carriers one tool that allows them to prove the dimensions of the freight being hauled. All of the main LTL carriers we work with are using this technology.”

“I’d be willing to bet that within three years, every docking terminal will have a dimensioner,” he said. “What we’ve heard is that the payback timeline is three to six months.”

Major LTL carriers are unified in their praise of the benefits that dimensioner technology brings to their companies, particularly the ability to justify price corrections that capture lost revenue.

Given the potential for higher freight bills, shippers might not welcome the spread of this technology. However, there are potential benefits on the shipper side of the equation.

In order to ensure that all their invoices are in order, shippers frequently spend money to employ agencies to review and audit their invoices or to hire internal staff to do this, Hawkins said.

In contrast, the density-based model is simple and straightforward.

“Everyone understands the pricing,” Hawkins said. “There are fewer pricing and invoicing exceptions. There’s far less complexity. There are no surprises.”

“Density-based pricing is certainly a more accurate pricing model, and it’s much simpler to define, track and administer,” he said.

The dimensioner is good for the shipper, the 3PL and the carrier, said Doyle, of Diversified Transportation Services. “Accuracy is best for everyone. The technology keeps everyone on the same page.”

PNG Worldwide’s Glavce, however, warned that companies should not expect quick changes.

“Shippers understand that this technology is good for the industry,” he said, “but change is hard.”