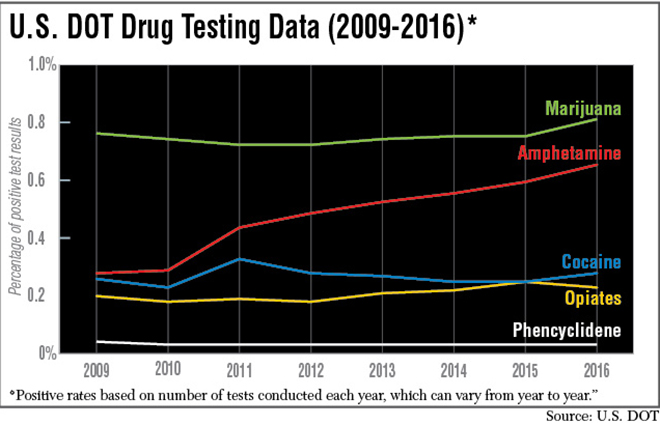 A new U.S. Department of Transportation drug testing report shows that the overall 2016 lab-reported positive drug test rate for truck drivers and other DOT security-­sensitive employees rose to its highest level since at least 2009, including year-­over-­year increases in three of five drug categories.

However, despite the rate increase, the actual number of people who tested positive for several drugs declined year-over-year, due to about 800,000 fewer tests administered in 2016.

Of all the drugs identified in DOT urine tests, more commercial motor vehicle drivers tested positive for marijuana in 2016 than any other drug category.

The rate of positive tests for amphetamines continued to climb at a rapid rate, followed by increases in cocaine test failures. The positive rate for cocaine rose from 0.24% to 0.27% after declining the past three years, according to the data compiled by DOT’s Office of Drug and Alcohol Policy and Compliance.

The failure rates for phencyclidine, or PCP, remained about the same at 0.02% but declined 0.24% to 0.22% in the test category that includes heroin, codeine and morphine.

In 2016, about 97% of the 5.5 million lab­-reported random DOT tests were taken by truck and bus drivers, down from 6.3 million tested in 2015, according to the report. The decline in overall numbers of tests taken was largely due to a reduction in the agency’s required random testing rate to 25% of commercial driver license holders in 2016, compared with 50% in 2015, a Federal Motor Carrier Safety Administration spokesman said.

Drivers who fail drug tests are immediately no longer permitted to drive. They must voluntarily enter a program for evaluation and treatment for substance abuse if they wish to return to duty. They also must pass a subsequent drug test, according to FMCSA regulations.

Despite a nationwide opioid overdose epidemic, DOT has not yet approved testing for the highly abused pain medicine. However, in a January notice of proposed rulemaking, the agency took a step toward requiring opioid testing for the prescription medications of hydrocodone, hydromorphone, oxycodone and oxymorphone. A final rule to add the test panels has not yet been issued.

“There’s an opioid epidemic, and DOT’s drug testing program does not include the most widely abused prescription opioids,” Abigail Potter, manager of safety and occupational health policy for American Trucking Associations, told Transport Topics. The same is not true for many motor carriers who, in addition to urine tests, do hair testing that also tests for all of the broad classes of opioids, Potter said.

Positive drug test results for amphetamines were the second­ highest in number last year, with 35,421 drug test takers registering positive for amphetamine use, compared with 37,619 in 2015, a rate increase of 0.65% from 0.59%.

The rate of suspected tampering or cheating on tests “remained low but is a continuing concern,” according to the report.

A spokesman for FMCSA declined to comment on the drug test rates.

Potter said drug use among drivers as a group is generally lower than most other U.S. worker sectors.

“However, when people are using when they’re on duty, it can be extremely costly to life, and financially,” Potter said. “These are people we don’t want on the highways driving a very large truck.”

Potter said she was not surprised to see the increase in the rate of marijuana test failures.

By regulation, truck drivers are not permitted to use marijuana, and should know better, Potter said. But because many states have either passed laws allowing marijuana for medical or recreational use, it’s apparently becoming more difficult for truck drivers to say no, she added.

By comparison, Quest said the 2016 positive drug test rate was 4.2%, a 5% relative increase over the previous year’s rate of 4.0%, and the highest annual positivity rate since 2004.

“This year’s findings are remarkable because they show increased rates of drug positivity for the most common illicit drugs across virtually all drug test specimen types and in all testing populations,” Barry Sample, senior director of science and technology at Quest Diagnostics Employer Solutions, said in a recent statement.