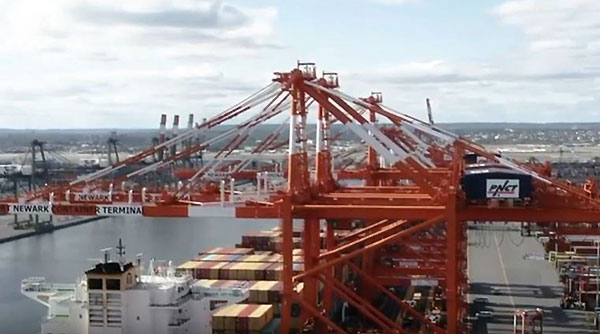 Port workers at facilities across the country are remaining at work after the American Association of Port Authorities requested the Department of Homeland Security declare them essential employees.

In California, workers at 11 ports, including Los Angeles and Long Beach, the nation’s two largest, respectively, are operating.

The staff of the Port Authority of New York and New Jersey is mostly working remotely, but longshoremen and others on the front lines are loading and unloading ships.

“All the terminals hire the longshoremen to do the work. They’re separate from the port authority, but we have operations people at the port,” port spokesman Steve Coleman told Transport Topics.

Meanwhile, the Port of New York and New Jersey announced a 2% drop in 20-foot-equivalent unit container volume, processing 579,124 TEUs in February compared with 585,216 in the same month a year ago.

The Port of Savannah, the second busiest facility on the East Coast, announced it processed 364,405 TEUs in February, up 17% from a year ago when workers moved 312,042 containers.

“We are thankful for the confidence our customers continue to show in Georgia’s reliable transportation networks, amid such uncertainty in the market,” said Griff Lynch, executive director at Georgia Ports Authority.

But Savannah officials said they expect to see a drop when March volume is released next month.

In separate requests, the Port Authority of New York and New Jersey and 78 other ports represented by the American Association of Port Authorities are seeking almost $3 billion in federal aid due to the coronavirus.

The leadership of the New York-New Jersey port is seeking $1.9 billion. Chairman Kevin O’Toole and Executive Director Richard Cotton on March 19 wrote a letter to the congressional delegation of both states outlining the extent of the economic damage: “While the port authority continues to operate so that essential people and goods get where they need to go, we are facing precipitous drops in passenger and cargo volumes,” the letter said. “Additionally, our tenants are requesting fiscal relief from rents and charges as their industries contract under the strain of this pandemic.”

Only a portion of that money is for port-related services, as the port authority operates a sprawling transportation system that includes the nation’s busiest airport system, coastal ports, and bridges and tunnels to and from New York City, as well as three bus terminals.

“The port authority must continue to operate through this crisis. Whether by air, land, rail or sea, we are dedicated to getting critical health care workers, first responders and other essential workers where they need to be to address those most impacted by this crisis and to keep the supply chains open to ensure goods and supplies keep flowing throughout the region,” the letter read.

In a separate request, the Port Authority of New York and New Jersey asked for $1 billion in aid to “essentially keep the lights on and keep operations functional for 60 days,” AAPA CEO Chris Connor told Transport Topics. “This really is going to be for keeping businesses functioning and running, and minimizing people becoming unemployed.”

The group’s preliminary estimates show a 20% annualized reduction in cargo activity at U.S. ports, leading to a loss of $1 billion in revenue.

Connor said the leaders of the ports are concerned about the spread of the virus.

“Ports are a part of the short-term solution, meaning, having vibrant and active, fully functioning seaports are going to help aid us through this thing because they provide avenues for goods and supplies that are part of this crisis, particularly on the health side,” he said. “When we get on the other side of the health crisis, they are going to be part of the economic recovery, in getting life back to somewhat of normal, whatever that is.”