Port Traffic Jam May Be to Blame in California Oil Spill 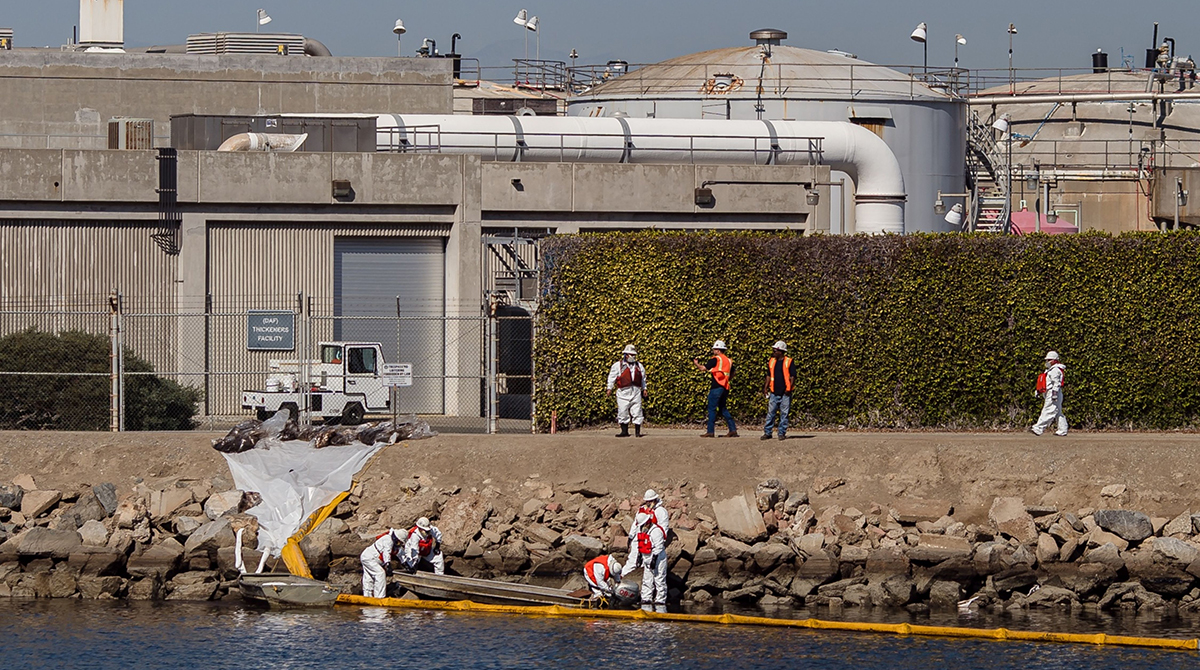 Workers with Patriot Environmental Services clean up during an oil spill at the Talbert Marsh in Huntington Beach on Oct. 3. (Ariana Drehsler/Bloomberg News)

An unremitting shipping logjam in the waters outside of Los Angeles already has contributed to higher costs, delays and intermittent goods shortages across the U.S. Now, it could be to blame for California’s biggest oil spill in 27 years.

Although the official cause of a pipeline rupture that spilled as many as 3,000 barrels of crude oil into the ocean off Orange County remains unconfirmed, preliminary reports indicate an anchor may have hooked the pipeline, tearing the metal open. About 4,000 feet of the pipeline had been moved 105 feet from its original position and divers found a 13-inch split in the line that’s likely the source of the release, the Coast Guard said.

The pipeline was “pulled like a bowstring,” Martyn Willsher, CEO of line operator Amplify Energy Corp., said at a briefing this week. “It is a 16-inch steel pipeline that’s a half inch thick and covered in an inch of concrete, and for it to be moved 105 feet is not common.”

The volume of oil that flowed from the leak is likely to be revised downward, Willsher said Oct. 6. About 5,000 gallons already have been recovered, according to the U.S. Coast Guard.

The spill discovered over the weekend, which sullied nearby wetlands and closed popular beaches along the Orange County coast, happened at a time when there’s a near record backup of ships waiting off Southern California ports. The massive vessels are queueing to unload containers of goods to satisfy booming American demand for everything from construction materials to bicycles. A shortfall in the number of truck drivers and a lack of available warehouse space are slowing deliveries.

“The more ships you have at anchor, the more risk there is that something could happen,” said Paul Blomerus, executive director of Vancouver, British Columbia-based Clear Seas Centre for Responsible Marine Shipping. “There are some examples of anchors snagging critical infrastructure” in the past, including power cables, he said.

Such accidents are a rare occurrence, according research group Clear Seas. In 2017, in two separate incidents in January and April, ship anchors snagged power cable’s in Vancouver, the organization said.

On Oct. 4, as workers scrambled to contain the southward drift of crude oil from the pipeline incident, 146 vessels, almost two-thirds of them containerships, were anchored or at berth in the ports of Los Angeles and Long Beach, close to the record reached late last month, according to the Marine Exchange of Southern California, which monitors ship traffic off the coast. Nine out of the 10 so-called contingency anchorages off Huntington Beach, near to where the pipeline breach happened, were occupied and 33 vessels were drifting in deeper waters in the ocean.

Critical infrastructure such as underwater pipelines are carefully marked on nautical maps so vessels can steer clear. But ships can sometimes drag their anchors when moving for any number of reasons, James Kipling Louttit, the Marine Exchange’s executive director, said Oct. 6. He said he couldn’t comment on the cause of the pipeline rupture specifically other than that it is not interfering with marine traffic. Spokespeople for the ports of Los Angeles and Long Beach also said the spill hasn’t impacted their operations.

The oil spill was first discovered Oct. 2 after a low-pressure alarm on the pipeline sounded at about 2:30 a.m. The pipeline carries oil produced and treated on three platforms located in the Beta oil field, more than 8 miles off the coast.

Satellite imagery shows what appeared to be an oil slick forming at 10:58 p.m. Oct. 1, according to John Amos, president of SkyTruth, an environmental watchdog group that tracks incidents in the oil and gas industry.

“What could cause this kind of a sudden, high-volume release?” Amos said in a Zoom interview. “An anchor strike.”

— With assistance from John Gittelsohn and Sarah McGregor.