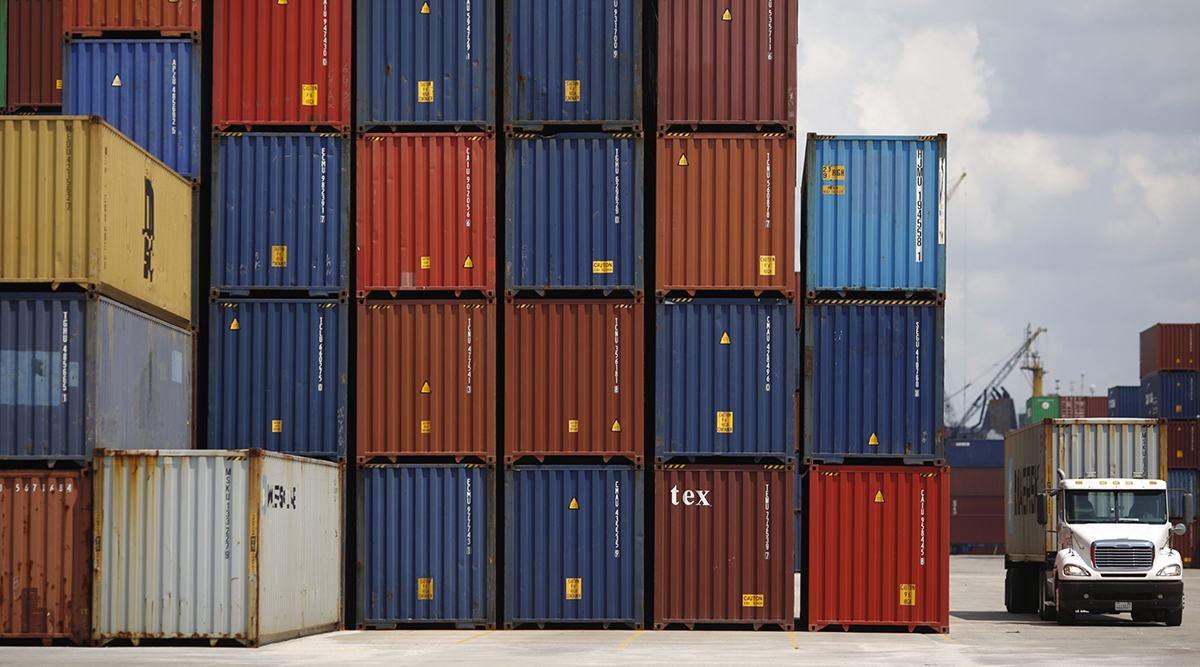 A semitruck drives past shipping containers in the APM Terminals yard at the Port of Mobile in Mobile, Alabama. (Luke Sharrett/Bloomberg News)

The Port of Mobile has set a new record for annual container traffic, beating the benchmark it set in 2021 by more than 11%.

The 2022 data bears out Port Authority leadership’s regular reports that the era of the COVID-19 shutdown, with its supply chain disruptions, was a time of growth and opportunity for Alabama’s deepwater port. Port Authority Director and CEO John C. Driscoll said a slate of ongoing developments set the stage for the growth trend to continue over the next few years, though the state of the global economy remains a concern.

“It just shows you that the numbers continue to move in a very positive manner,” he said, “where customers are using Mobile, both inbound and outbound, because they find they can get the ships in, they can get them out in an efficient manner.”

The standard unit in containerized shipping is a TEU, representing the capacity of a standard 20-foot cargo container. In 2020 the container terminal in Mobile, which is operated by APM, handled 502,623 of them. At the time this was not only a new record, it was the first time yearly activity had topped half a million TEUs. According to figures newly released by the Port Authority, that rose to 563,191 TEUs in 2022, a gain of 11.3%.

That makes nine years of double-digit growth for the port, which also reports a long unbroken growth streak for intermodal rail shipping.

Over the last decade, a series of expansion projects have kept the terminal’s capacity growing a step or two ahead of demand, and that work is ongoing: Phase IV will bring the terminal’s annual capacity to about 1 million TEUs.

Meanwhile, other developments are afoot. The U.S. Army Corps of Engineers is working to deepen and widen the ship channel connecting the port to the Gulf of Mexico. A new container terminal in Montgomery will handle container trains that will flow directly from Mobile to that area. A separate “Alabama-USA Corridor” backed by the state will provide container rail service to the Birmingham area and points north. A new flyover bridge will create on-dock rail access on the Mobile waterfront, speeding up intermodal transfers in Mobile. And APM has ordered two giant new cranes to join the four already standing near the Virginia Street exit on Interstate 10.

“It’ll take a couple of years” for these projects to come online, Driscoll said, but 2025 is starting to look like an exciting year. “It’s all hitting at very similar times,” he said.

If and when it all clicks, the result will be that bigger ships can dock in Mobile, where they’ll be unloaded faster, with more of those ubiquitous steel containers being stacked on more trains headed for more destinations throughout and beyond Alabama.

That assumes the global economy keeps perking along. Driscoll said trade “did hit some challenges” at the end of 2022 with a bit of a slowdown.

“The key driver is going to be, will there be a recession, will consumption be reduced,” he said. “I don’t have a crystal ball for that.”

However, he said he thinks Mobile’s port will continue to draw in new clients.

In most cases, the arrival of a containership in a port isn’t the result of short-term planning. It’s part of what’s called a “service”: a regular connection like a bus route. Driscoll said that Mobile gained two new services in 2022 while one existing service doubled its capacity. He expects to see more such growth. 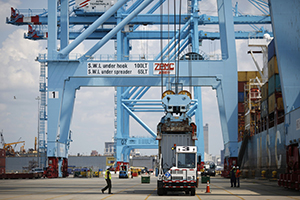 A shipping container is loaded onto a truck in the Port of Mobile's APM Terminals yard. (Luke Sharrett/Bloomberg News)

“We do expect there will be some additional services in ’23, ’24, ’25,” he said. “I don’t know exactly when, but we understand that’s being contemplated currently by a couple of different lines.”

“Last year, in 2022, we handled 312 container vessels, which was an increase of 75 vessels more, versus 2021,” he said. “So there’s more ships that have been calling and actually larger ships.”

“We have a number of services to and from Asia, that’s how this port started and it is continuing to grow and prosper in that,” he said. “But we’re seeing additional services from other geographic regions.”

“Once you expand your breadth of scope, where you’re going to or coming from, it’s only a good thing for your customer base,” he said. “It just opens up markets in a more efficient way.”