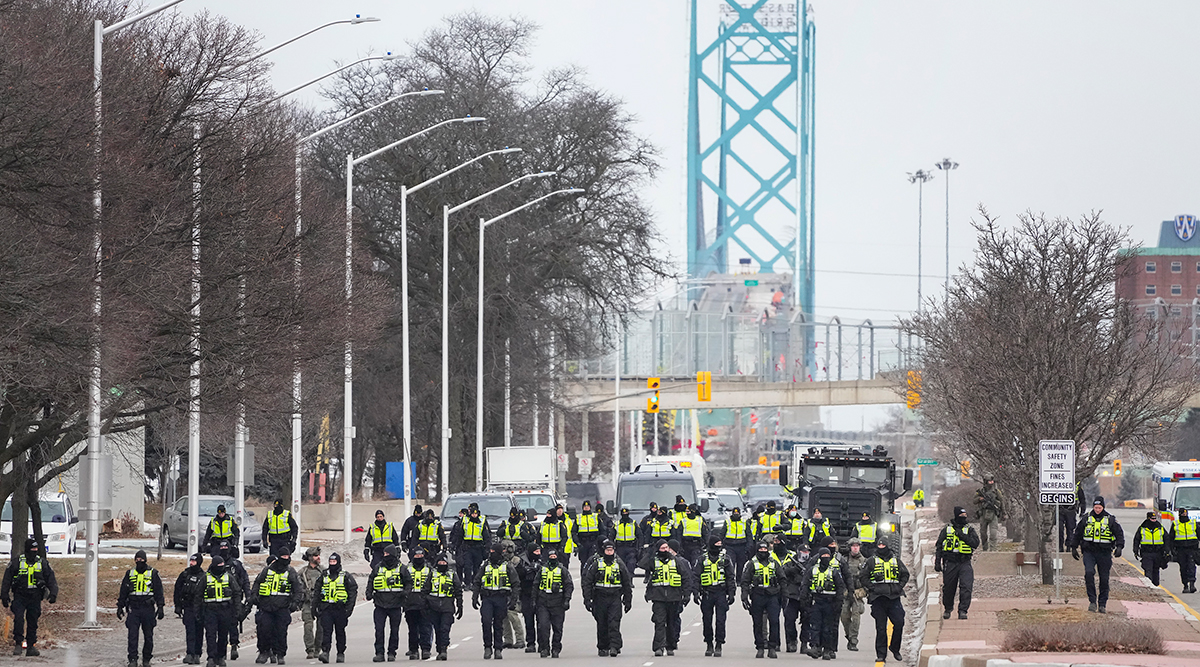 Police walk the line to remove all truckers and supporters in Windsor Feb 13. (Nathan Denette/The Canadian Press via Associated Press)

WINDSOR, Ontario — Police moved in to clear and arrest the remaining protesters near the busiest U.S.-Canadian border crossing on Sunday, ending a demonstration against COVID-19 restrictions that has hurt the economy of both nations even as they held back from a crackdown on a larger protest in the capital, Ottawa.

Windsor police said about 25 to 30 people were peacefully arrested and seven vehicles were towed just after dawn near the Ambassador Bridge that links their city — and numerous Canadian automotive plants — with Detroit.

It was not immediately clear when the bridge might be opened.

“Today, our national economic crisis at the Ambassador Bridge came to an end,” Windsor’s Mayor Drew Dilkens said. "Border crossings will reopen when it is safe to do so and I defer to police and border agencies to make that determination."

But the bridge remained closed as Feb. 13 drew to a close while a snowstorm hit the area, and Windsor Police Chief Pamela Mizuno didn't offer a timetable for its reopening.

“There are steps we need to take in order to reopen the roadways so that we don’t encounter the same issue,” she said at a news conference. “We need to ensure we are able to maintain the traffic flow.” 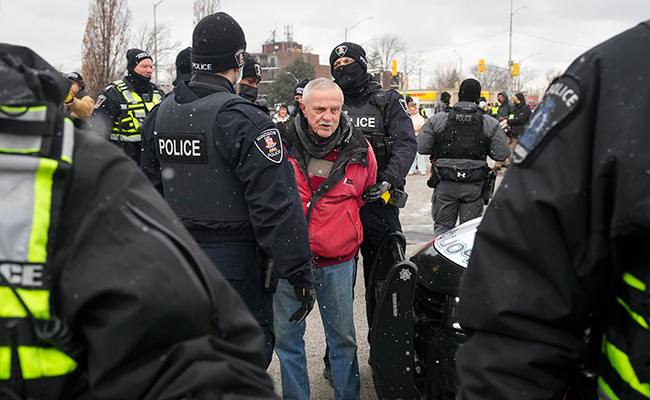 A protester is arrested by police in Windsor Feb. 13. (Nathan Denette/The Canadian Press via Associated Press)

In Ottawa, the ranks of protesters swelled to what police said was 4,000 demonstrators. The city has seen that on past weekends, and loud music played as people milled about downtown where anti-vaccine demonstrators have been encamped since late January.

The protests at the bridge, in Ottawa and elsewhere have reverberated outside the country, with similarly inspired convoys in France, New Zealand and the Netherlands, and the U.S. Department of Homeland Security warned that truck convoys may be in the works in the United States.

American Trucking Associations spoke out against the notion of such efforts.

“ATA strongly opposes any protest activities that disrupt public safety and compromise the economic and national security of the United States,” ATA President Chris Spear said in a statement. “We held serious concerns about the unintended impact a vaccine mandate would have on our nation’s supply chain and ongoing COVID response efforts, which is why ATA challenged the OSHA rule all the way to the Supreme Court — where we prevailed.”

Spear added, “We’ll continue to advocate on behalf of our members for policies that enable the industry to keep the supply chain moving, and we’ll do so in ways that do not hinder the safe and timely flow of commerce that everybody depends on.”

An ex-Cabinet minister in Canadian Prime Minister Justin Trudeau’s government took the unusual step of calling out her former federal colleagues as well as the province and city for not putting an end to the protests.

“Amazingly, this isn’t just Ottawa. It’s the nation’s capital,” Catherine McKenna tweeted. “But no one — not the city, the province or the federal government can seem to get their act together to end this illegal occupation. It’s appalling. ... Just get your act together. Now.” 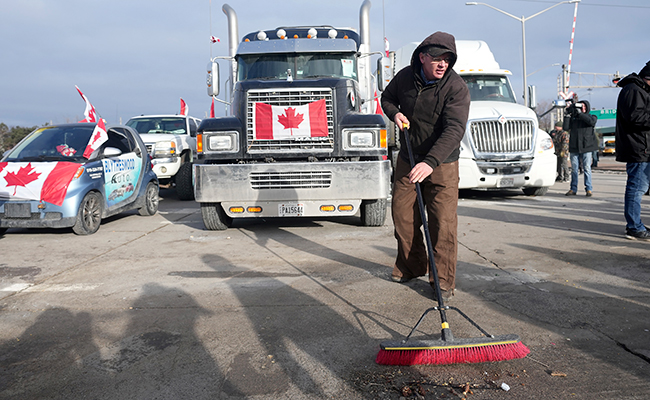 A protester sweeps up in preparation of police enforcing an injunction against their demonstration in Windsor Feb. 12. (Nathan Denette/The Canadian Press via Associated Press)

Trudeau has so far rejected calls to use the military.

“The Prime Minister stressed that border crossings cannot, and will not, remain closed, and that all options are on the table,” Trudeau’s office said in a statement late Feb. 12 after he met with senior officials.

Trudeau has called the protesters a “fringe” of Canadian society, and both federal and provincial leaders say they can’t order police what to do. 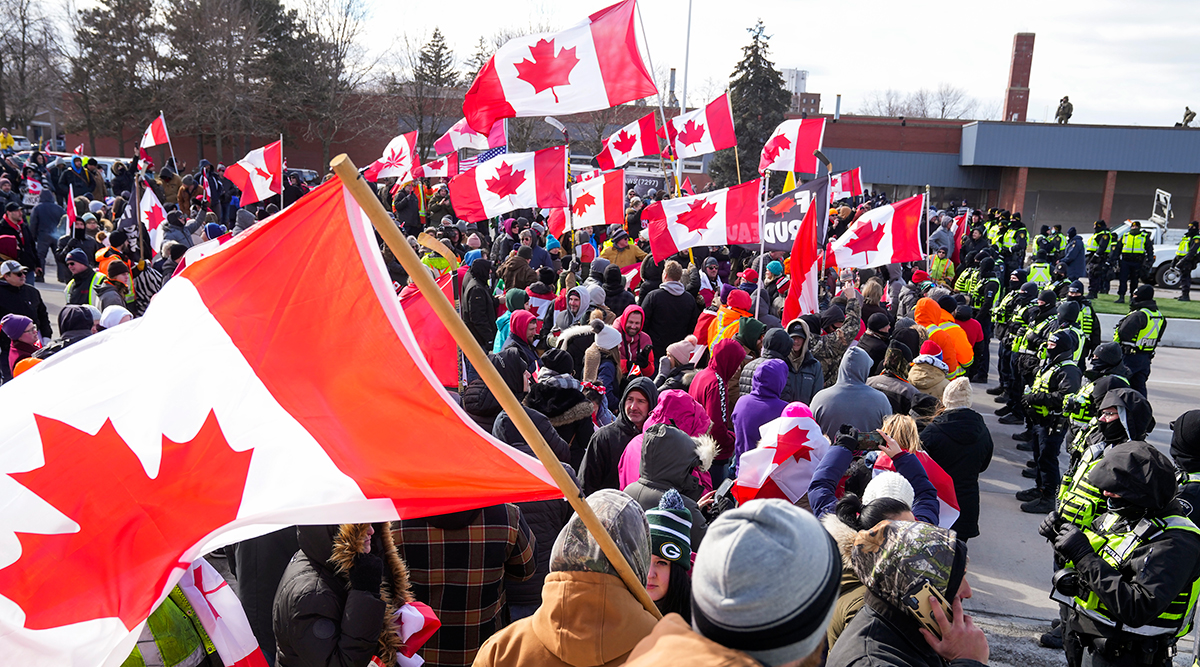 Ottawa police said a joint command center had now been set up together with the Ontario Provincial Police and the Royal Canadian Mounted Police.

Police earlier issued a statement calling the protest an unlawful occupation and saying they were waiting for police “reinforcements” before implementing a plan to end the demonstrations.

Ottawa Mayor Jim Watson declared a state of emergency last week for the capital, where hundreds of trucks remained in front of the Parliament Buildings and demonstrators have set up portable toilets outside the prime minister’s office where Trudeau’s motorcade usually parks.

Surrounded by dozens of officers in Windsor, a man with “Mandate Freedom” and “Trump 2024” spray-painted on his vehicle left the bridge entrance early in the day as others began dismantling a small, tarp-covered encampment. A trucker honked his horn as he, too, drove off, to cheers and chants of “Freedom!”

But hundreds more arrived to bolster the crowd and settled into a faceoff with police about two blocks away, waving flags and yelling. While there were no visible physical confrontations, the crowd still controlled the road to the bridge, and traffic had not resumed as of the evening.

Windsor police tweeted that no one had been arrested but urged people to stay away from the bridge: “We appreciate the cooperation of the demonstrators at this time and we will continue to focus on resolving the demonstration peacefully. Avoid area!”

The previous day, a judge ordered an end to the blockade of mostly pickup trucks and cars, and Ontario Premier Doug Ford declared a state of emergency allowing for fines of C$100,000 and up to one year in jail for anyone illegally blocking roads, bridges, walkways and other critical infrastructure.

The Ambassador Bridge is the busiest U.S.-Canadian border crossing, carrying 25% of all trade between the two countries, and auto plants on both sides have been forced to shut down or reduce production this week. The standoff came at a time when the industry is already struggling to maintain production in the face of pandemic-induced shortages of computer chips and other supply chain disruptions.

On the other side of the country, protesters disrupted operations at another border crossing between Surrey, B.C., and Blaine, Wash., but officials said it was not blocked. Two border crossings, in Alberta and in Manitoba, remained shut down as well.

Householder reported from Windsor, and Gillies from Toronto. Ted Shaffrey contributed from Ottawa.