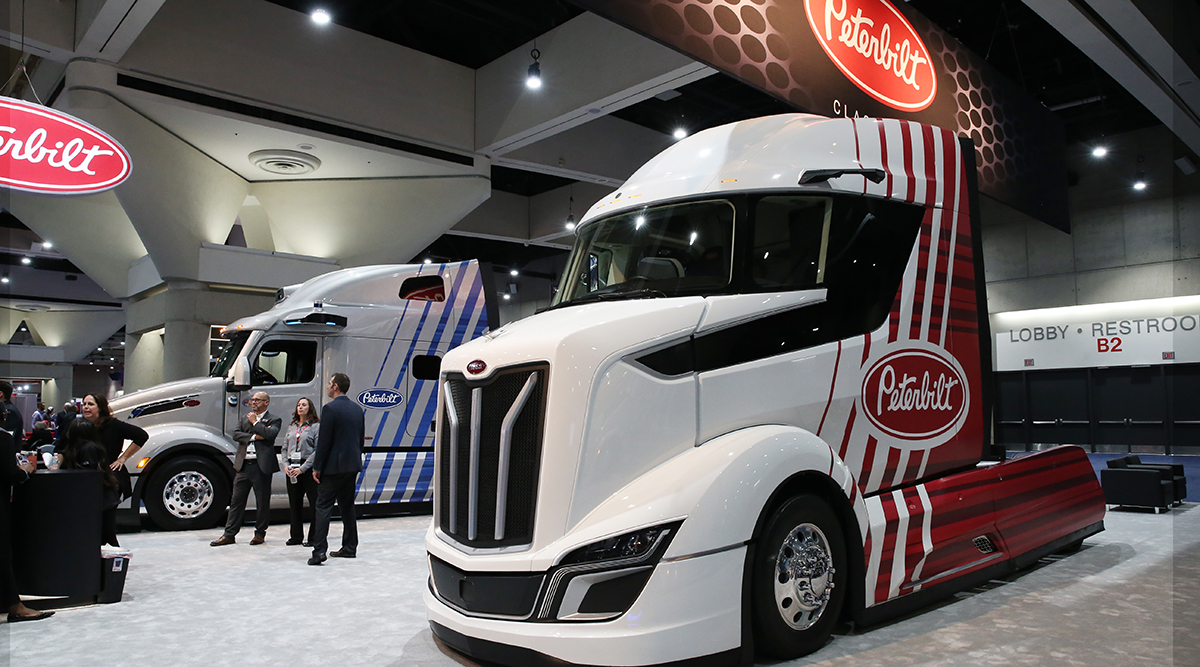 The futuristic truck is the result of a multiyear collaborative research and development project conducted by Peterbilt, engine maker Cummins Inc. and other industry partners under the SuperTruck II program co-funded by the U.S. Department of Energy.

The concept truck features a wide range of technologies and innovations designed to enhance freight efficiency, from improved aerodynamics and weight reduction to advanced powertrain concepts.

Peterbilt’s concept truck is powered by a Cummins 15-liter diesel engine with a 48-volt mild hybrid system that generates electricity for auxiliary functions and reduces demand on the engine.

To enhance aerodynamics, an automatic chassis lowering system moves the truck closer to the ground at highway speeds to reduce resistance.

The truck also features a “disconnect” tandem drive axle that can operate as a 6x4 or 6x2 configuration. Both axles are engaged at lower speeds where extra traction is needed, but at higher speeds the system disengages one of the axles for greater efficiency.

Meanwhile, trailer maker Great Dane created a special 53-foot trailer to pair with the Peterbilt tractor. The concept trailer is outfitted with 15 solar panels covering the roof along with weight savings and carbon fiber aerodynamic devices.

In total, the combination vehicle is 4,800 pounds lighter than a comparable tractor-trailer.

“We approached this project with the philosophy that we want to develop products that do have the potential to come to market, and work with partners that have that same mindset,” said Jacob White, director of product marketing at Peterbilt. “Every decision we made here was, at its heart, about efficiency, but also with an eye on production viability.”

Peterbilt was not yet ready to provide final figures for its concept truck’s freight efficiency gains at MCE, but the vehicle is in the final stages of testing, White said.

Inside the cab, the driver’s seat is positioned in the center of the cockpit to provide the driver with a panoramic view.

The cab’s rear wall is inclined 5 degrees to tighten the gap between the tractor and trailer. 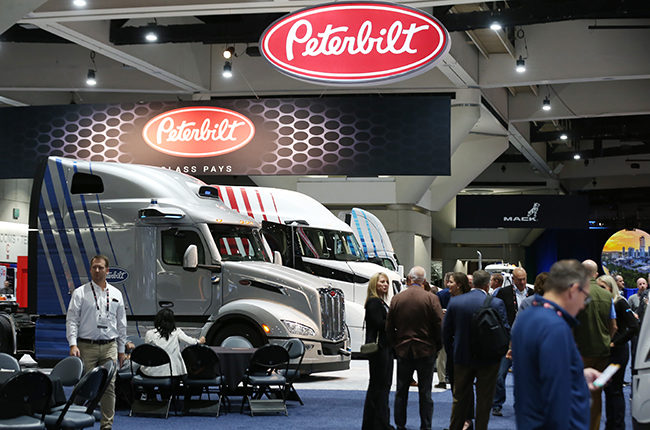 Peterbilt displayed three Class 8 tractors at its booth on the show floor of MCE 2022. (John Sommers II for Transport Topics)