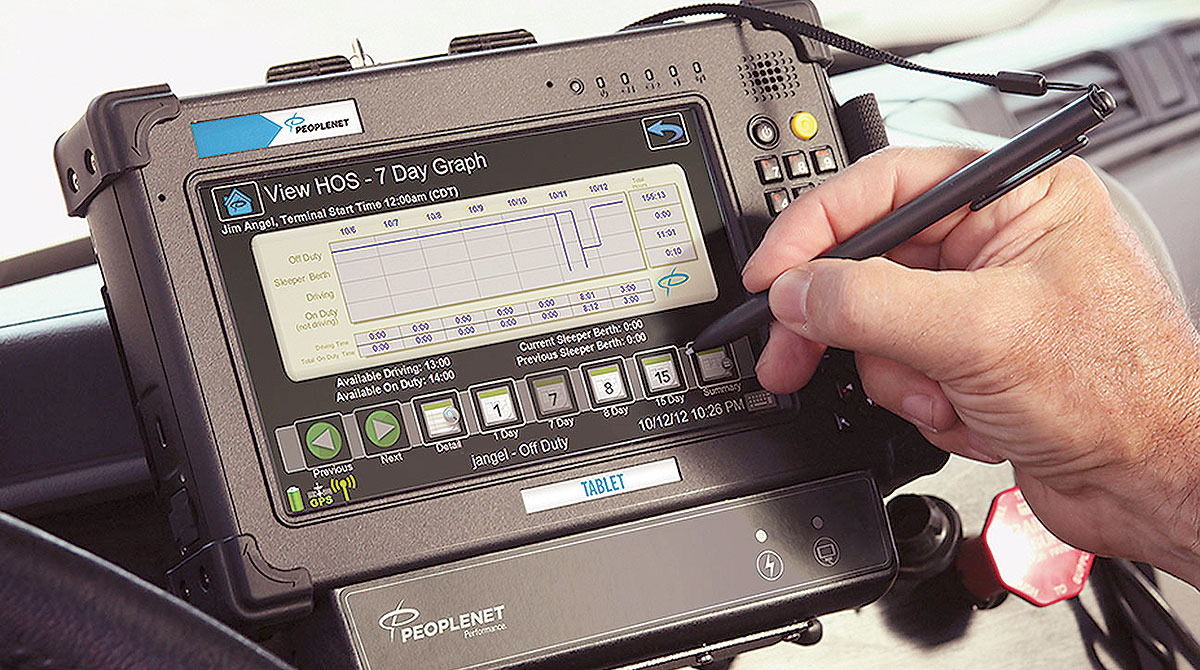 Some PeopleNet users are experiencing a software rebooting problem. (PeopleNet)

The Federal Motor Carrier Safety Administration would not address the issue to Transport Topics but made clear it is aware of the issue and that FMCSA officials are monitoring it.

The glitches and trouble logging on to the PeopleNet system began affecting some drivers in late December, according to some users, leading to frequent reboots, frustrated tweets, calls to customer service and a necessary switch to paper logs to record hours of service.

Trimble spokeswoman Lea Ann McNabb told TT that the company began to observe on Jan. 1 “software rebooting issues” in a subset of its customer base that uses the PeopleNet g3 legacy telematics onboard device.

“Once we identified the root cause, we quickly worked to communicate and provide options to these customers to address this issue,” McNabb said.

A software update was made available to customers on the evening of Jan. 1, McNabb said.

“We are actively working with impacted customers to implement the update and restore the connection to the devices in a timely and complete manner,” McNabb said in an email to TT. “Impacted drivers have switched to using paper logs as an alternative to track hours of service until their g3 onboard device has been updated. Driver connectivity is our top priority, and we remain focused on ensuring a seamless user experience for all of our customers.”

Tom Kuehl, owner of Kuehl Transit of Heron Lake, Minn., told TT that the slowdown in software led to long waits for the systems to load.

“Once we logged into it, it doesn’t seem to be an issue,” Kuehl said.

The fleet of eight tractors has been using PeopleNet since 2016, Kuehl said, adding that initial calls to Trimble Transportation took a lot of time to get through.

“I think they were just overwhelmed by calls,” he said.

The PeopleNet software problems come only two months after another telematics firm, Omnitracs, said its ELDs had experienced outages caused by an infrequent update to GPS operations. The outages had prompted drivers to revert to paper logs to record hours of service.

Trimble Transportation is a subsidiary of Trimble, a Sunnyvale, Calif.-based technology company. Founded in 1978, the company had revenue of $3.1 billion in 2018.