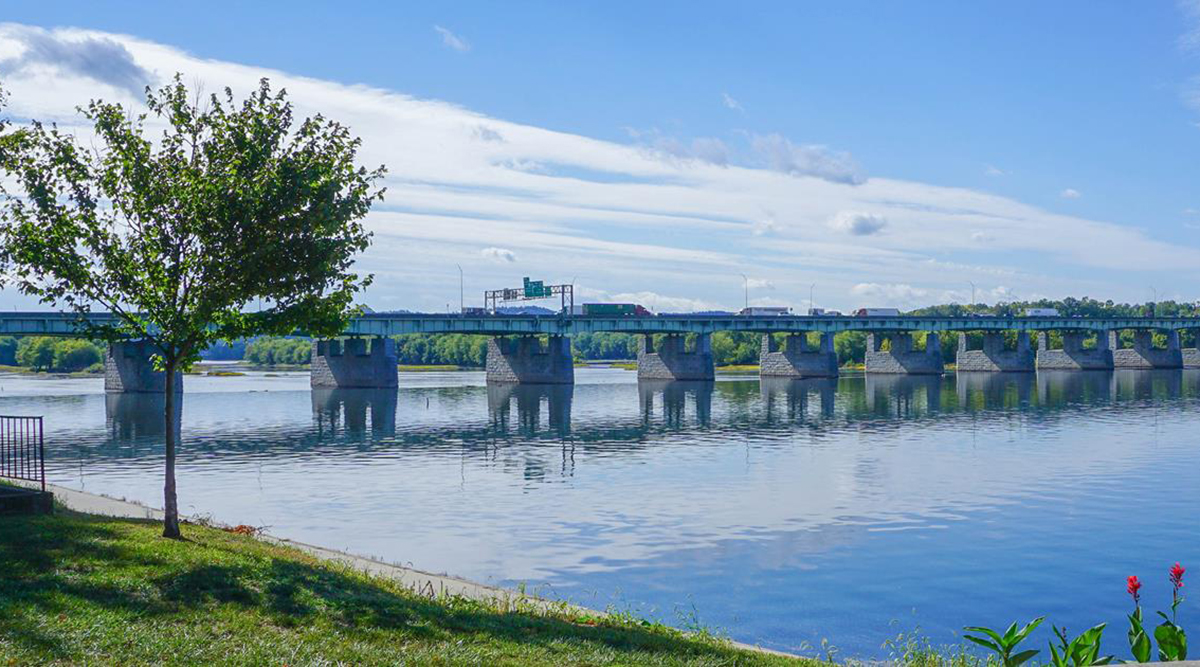 The I-83 John Harris Memorial (South) Bridge currently carries more than 125,000 vehicles over the Susquehanna River every day. It was built in 1960. (PennDOT)

With the proposal to toll nine major interstate bridges to pay for their replacement or rehabilitation now dead, a panel of Pennsylvania state senators set out to explore what happens next to address these costly but necessary transportation projects.

The Senate Transportation Committee on Aug. 24 held a hearing in Pittsburgh to discuss the current status of the bridge projects – which included the replacement of the I-83/South Bridge in Harrisburg – and explore alternative ways to pay for them.

Portions of five of the bridges are being inspected more frequently than the typical two-year cycle due to their deteriorating condition, PennDOT’s deputy secretary for planning Larry Shifflet told the committee.

“I don’t think anybody disagreed that these bridges that were designated for repair needed repair. It was just a question how to properly fund them,” said committee Chairman Wayne Langerholc (R-Cambria County). “We have a duty to the taxpayers of this commonwealth to ensure that their dollars are fairly and efficiently spent and we have a duty to also keep them safe.”

Two lawsuits and a new law slammed the brakes on PennDOT’s plan for tolling the bridges to pay for eight to be replaced and one, Girard Point Bridge on I-95 in Philadelphia, to be rehabilitated.

To date, Shifflet told the committee the department has spent about $20 million on design and environmental studies in preparation for that work.

Much of that preliminary work can still be salvaged and serve as a starting point for pursuing the projects without a tolling component, said Gary Graham, regional chief engineer for Camp Hill-based McMahon Associates, an engineering firm, during his testimony.

Among the funding alternatives brought out during the hearing was a mileage-based user fee on electric vehicle owners since they don’t pay the state’s gas tax.

However, with only 30,000 electric vehicles among the 12 million vehicles registered in Pennsylvania, it was acknowledged that idea alone wouldn’t come close to funding the bridge projects now estimated at $2.5 billion to $2.8 billion. When the bridge tolling candidates were first identified last year, the cost was about $2 billion.

Robert Latham, executive vice president of the Associated PA Constructors, a trade association that represents highway and bridge construction contractors, urged the lawmakers to consider freeing up $500 million for road and bridge projects by ending the practice of dipping into the gas tax-supported Motor License Fund to help pay for state police operations.

Latham also suggested PennDOT consider a different procurement method for the bridge projects to bring down the cost. By breaking the nine bridges into smaller packages of bridges, PennDOT could manage the projects instead of using the public-private partnership, or P3, approach that PennDOT chose.

“We have never been in favor of the P3 method of contracting,” Latham said. All that does, he said, is add “layer upon layer of lawyers, consultants and other people who add to the cost.”

“Why pay that premium?” he said. “You have a system that works.”

Langerholc indicated he isn’t ready to abandon the P3 method to getting the projects done.

He told the PennDOT official he would like to see a comparison between what it would cost to divide the nine bridges into smaller three-bridge packages that would allow Pennsylvania companies to bid on them vs. paying the upward of $300 million in annual payments over 30 years that Shifflet said would be owed to the P3 partner that PennDOT chose to handle all bridges in one package.

“Now that tolling is dead, nothing would preclude the General Assembly from taking up a bond,” Langerholc said. “We’ve already identified these bridges. We’ve already done a lot of the design work, preliminary environmental studies and putting that in place.”

Shifflet said PennDOT hasn’t done a cost-benefit analysis of the approach Langerholc suggested but is willing to work with the General Assembly if it is willing to take up “a bond issuance for us and take a potential different path on these nine bridges.”

Langerholc concluded the hearing saying he looks forward to continuing the conversation and leaning on the expertise of those who testified “to ensure that these bridges are completed in the best way possible.”