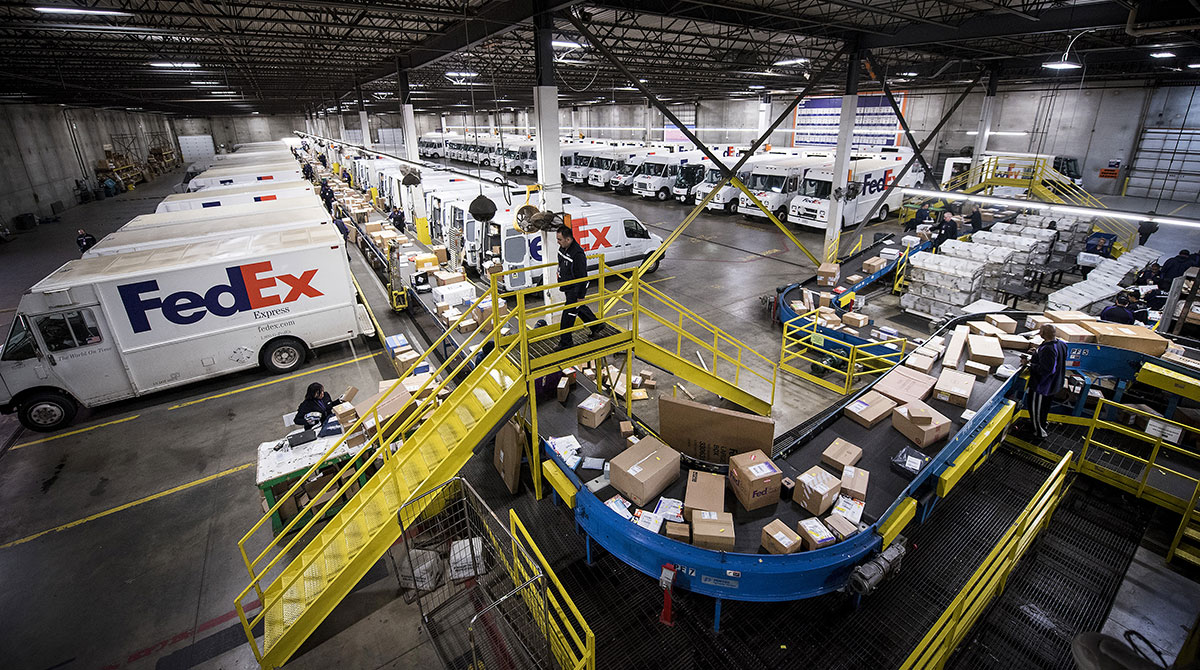 Packages move along conveyor belts as employees work at the FedEx Corp. shipping center in Chicago on Cyber Monday in 2017. (Christopher Dilts/Bloomberg News)

Some of the shipping industry’s largest companies have unveiled hiring plans for the holiday season to help with the anticipated increase of millions of packages.

The temporary hires will begin in November and continue through January.

UPS Inc. announced that it will hire about 100,000 people to facilitate the Christmas and Hanukkah e-commerce bumps.

“Every year, we deliver the holidays for millions of customers,” UPS Chief Operating Officer Jim Barber said Sept. 17. “In order to make that happen, we also deliver thousands of great seasonal jobs at our facilities across the country.”

The Atlanta-based company is taking on 5,000 more seasonal workers than last year.

The full- and part-time seasonal positions — primarily package handlers, drivers and driver-helpers — have long been an entry point for permanent employment at UPS, the company said.

Across the country, a portion of the hires are needed to staff temporary facilities that UPS builds just for the seasonal shipping rush, in addition to its permanent package hubs.

Likewise, FedEx Corp. said it plans to hire about 55,000 workers during the holiday season, an increase of 5,000 over last year, and increase hours for some existing employees.

The Memphis, Tenn.-based parcel delivery company also announced it will expand the Ground unit’s operations to seven days a week through the holiday season then continue on a six-day basis after the holidays throughout its U.S. network.

“The rise in demand for e-commerce goes beyond peak. It’s a year-round phenomenon and we are ready to meet that demand,” spokesman Raj Subramaniam said Sept. 12. “FedEx Ground has operated six- and seven-day operations during the holidays for several years as e-commerce has grown, and thanks to strategic investments in our network, we are now well-positioned to operate six days a week in the U.S. all year to best serve the rapidly growing demand.”

Aside from package carriers, logistics companies are adding jobs for the holiday season, too.

XPO Logistics Inc. said it expects to bring on 8,000 workers in North America for the holiday season, up from 6,000 last year.

“We’re ramping up for the holiday season and another significant increase in e-commerce activity,” President Troy Cooper said, calling the expected 8,000 hires a “significant” increase over last year’s holiday hiring.

The company also said its retail logistics volume is primarily driven by consumer demand for e-commerce and omnichannel retail fulfilment. Based in Greenwich, Conn., the company said it has about 183 million square feet of facility space.

“Our modern warehouses are filled with automation that is an attractive choice for workers and helps us to be as productive as possible for our customers,” Cooper said.

The U.S. Postal Service also will be hiring seasonal employees, but because the decision to add temporary employees is based on local need, it did not report on expectations for overall hiring.

FedEx Boosts Dividend, Shakes Up Board