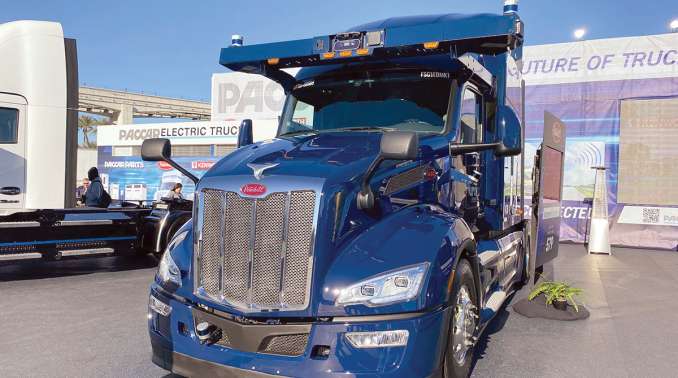 Paccar Inc. reported fourth-quarter net income rose 26% and revenue increased by about $1 billion compared with a year earlier. The company cited an improved supply chain leading to increased deliveries over third quarter, and strong gains in its parts and financial services segments.

“Paccar reported solid results, beating our and consensus EPS and revenue estimates. Deliveries exceeded our projection, R&D was lower and SG&A [ selling, general, and administrative expenses] was higher,” Matt Elkott, a research analyst with Cowen, wrote in a note.

“Customer demand for the new Kenworth, Peterbilt and DAF trucks introduced in 2021 is very strong,” Paccar CEO Preston Feight said in a release. “Kenworth, Peterbilt and DAF delivered 47,600 trucks in the fourth quarter, 45% higher than in the third quarter, reflecting an improvement in the global supply chain. I am very proud of our employees who have delivered outstanding trucks and transportation solutions to our customers while demonstrating the highest commitment to health and safety.”

The deliveries included 7,000 trucks that were awaiting components, and were proportional across its markets — the largest of which is North America, followed by Europe.

U.S. and Canada Class 8 retail sales are estimated to be in a range of 250,000-290,000 trucks in 2022, based on good economic growth and strong freight demand, according to the Bellevue, Wash.-based company.

The company reported it will open a new 260,000-square-foot parts distribution center in Louisville, Ky., this year to enhance parts availability for customers.

Paccar Financial Services said it offers competitive retail financing to Paccar truck brands Peterbilt, Kenworth and, in Europe, DAF dealers and customers. PFS has a portfolio of 204,000 trucks and trailers, with total assets of $15.42 billion.

PacLease, a major full-service truck leasing company in North America and Europe with a fleet of more than 39,000 vehicles, is included in this segment.

PFS achieved record fourth-quarter pretax income of $134.6 million, more than double the $63.8 million earned a year earlier. Revenue from financial services slipped to $390.4 million compared with $432.6 million in the same quarter of 2020.

“And so that has nearly zero CO2 output. It’s really just some trace CO2 from the lube oil stuff,” he said. “And I think we want that out there as an opportunity so that we can work with the governments and see what’s going to be acceptable and what’s going to provide our customers the right benefits. We think it’s early days and preselecting the right answer is not necessary.”