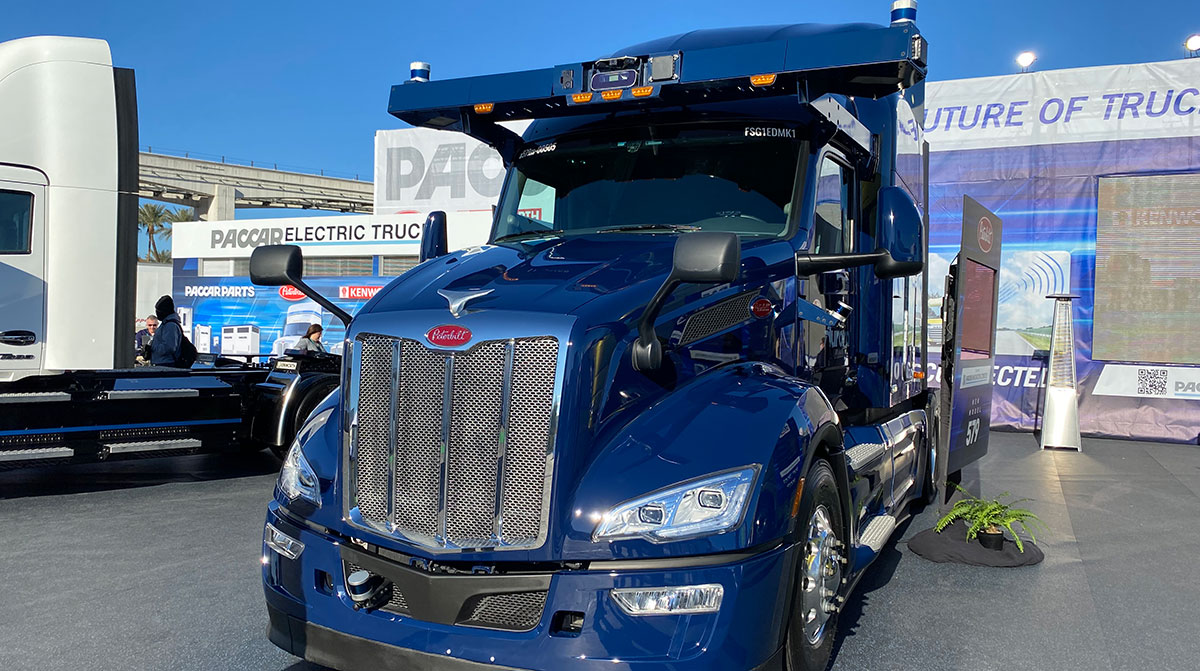 LAS VEGAS — Paccar Inc. and self-driving technology company Aurora showcased one of their autonomous trucks during CES 2022 on Jan. 6.

The Peterbilt Model 579 was equipped with Aurora sensors and cameras that aided the internal computing system responsible for its autonomous capabilities.

“This is the truck that we’ve been using,” Gabrielle Olivas, autonomous vehicle operator at Aurora, told Transport Topics. “This came from Texas. We’ve been using this model on the highway. We have several lidars, radars and cameras that we use to see 360 degrees around the vehicle. We can see out 400 meters. Every camera and lidars are together so that they can see the same thing.” 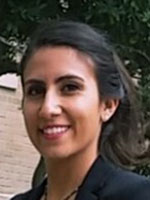 Olivas rides in the truck with the driver and is responsible for monitoring the equipment and a screen that displays what the sensors are seeing. They are in constant communication when on the road, and both can disengage the autonomous functions to go back into manual drive.

“Safety is our No. 1 priority,” Olivas said. “We’re always communicating back and forth about everything that we’re seeing on the screen, and all of our drivers have at least three years of experience so they know what they’re doing.”

RELATED: Autonomous, electric trucks are in the spotlight

The cameras and sensors are positioned over the top of the cab, on the sides and the front. The lidar at the front has the longest range, which helps facilitate highway travel. They detect real-time changes such as traffic patterns and pedestrians. This information is combined with a mapped view with additional information from previous trips.

“We do mapping in-house because we want it to be very exact,” Olivas said. “All the maps have little tiles. Say something happened with construction. We can annotate that and send it to the mapping team. The mapping team can look back at our camera feed and lidar feed and change the road.”

Paccar and Aurora formed a strategic partnership to develop autonomous trucks last January. The Peterbilt trucks used have undergone extensive real-world testing and driving demos. The trips mostly have been focused on highway travel, with the majority occurring between Dallas and Houston.

“We’re really focusing on those long hauls right now,” Olivas said. “We can also do some service streets. Like we can do full four-way stops in the truck, and that’s a part of our demo routes. So we can go up to the stop signs and take a U-turn under the highway and get back on.”

More recently, the trucks have been deployed for commercial use. They started taking loads for FedEx Corp. as part of a partnership announced Sept. 22. Uber Freight entered into a similar agreement Dec. 15.

“It’s actually been going great for the past few months that we’ve been doing it,” Olivas said. “We’ve been making sure to get the freight there at a 100% on-time rate.”

Olivas has seen how the trucks handle a variety of scenarios from stop-and-go traffic to huge lineups to merge. She also was onboard during the longest trip the truck took without the autonomous system being interrupted.

“I was actually in the cab on a mission taking a fleet to FedEx,” Olivas said. “Between our Palmer Hub and where we were stopping at a gas station, that was over 200 miles with uninterrupted autonomy.”

The Peterbilt 579 on display would be considered a Level 3 autonomous truck. Level 1 is defined by including a single automated system for driver assistance. Level 5 is the highest class and doesn’t require human attention. Level 3 vehicles can operate themselves in select situations and have environmental detection capabilities but still require a human to override the system when necessary.

“So right now, we’re at L3 and we’re shooting for L4,” Olivas said. “We’re trying to take the driver out of the truck by the end of next year. We have a long way to go. But since I’ve been working at the company, they’ve been making leaps and bounds.”

Level 4 would mean the autonomous systems in the trucks would be able to intervene if there is a system failure. It would be a major step toward removing a driver or technician from the truck outright. But beyond the technical side, there are many legal and political hurdles.