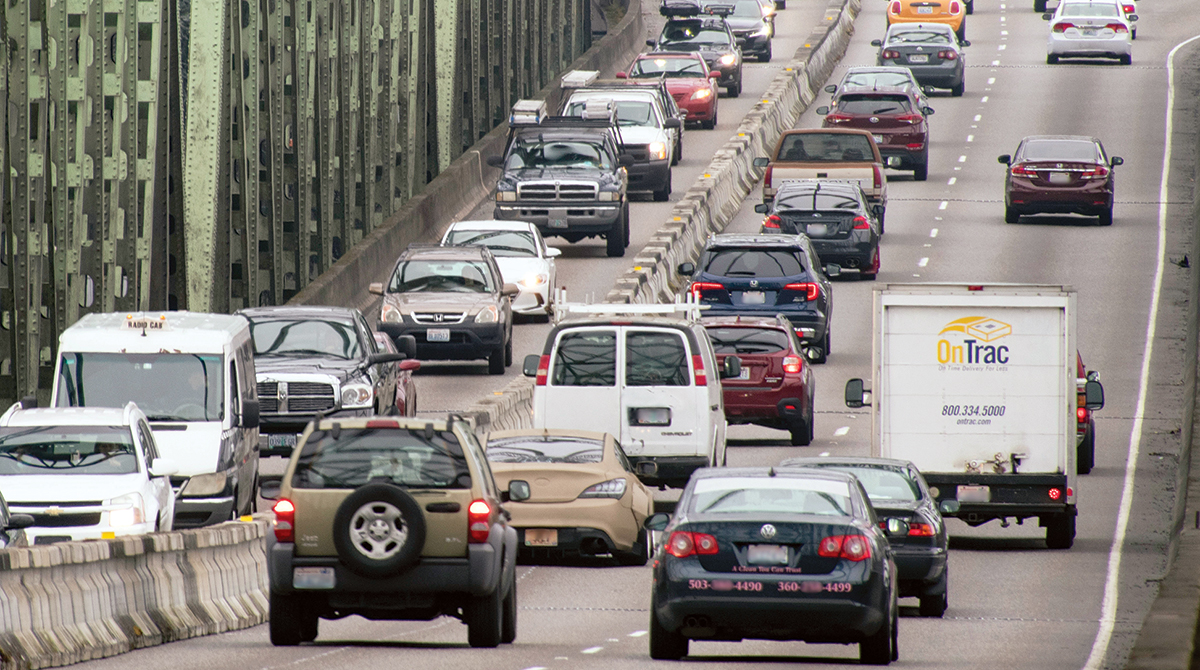 Traffic on Interstate 5 in Oregon. (Oregon DOT via Flickr)

Oregon lawmakers are considering a bill that would require owners of new, fuel-efficient cars and trucks pay a fee for every mile they drive beginning in 2026.

The legislation is intended to help address what transportation officials say is a grim financial reality facing Oregon and other states: Gas taxes are not a sustainable way to pay for highway and street maintenance projects. That problem will only become exacerbated as vehicles are made more fuel-efficient, they argue. Oregon has estimated its highway fund, of which 40% comes from gas tax revenues, will be insolvent by 2024 without significant action.

Oregon’s experiment with a vehicle-miles-traveled fee has been hailed nationally as a bold step toward what will eventually become a reality if, or when, local governments no longer can depend on gas taxes because the transportation sector won’t run on fossil fuels. It’s unclear whether Oregon’s bill will move forward this session. But the national conversation has changed considerably as the pay-as-you-go funding mechanism has gained popularity, including among some advocates in the Biden administration and Congress and through legislation in multiple states, including a failed effort in Republican-led Wyoming.

If passed, Oregon’s vehicle-miles-traveled fee wouldn’t be effective until July 2026. That’s just the beginning of the caveats. The House Bill 2342 fee would apply only to owners of new 2027 vehicles that don’t use gas or get 30 miles or more per gallon of gasoline. Drivers also would be be able to opt out of tracking their mileage and pay a flat annual fee of $400, a provision that would expire in 2030.

The miles traveled fee and the looming issue of finding a way to supplement and ultimately replace the gas tax isn’t new — Oregon started studying that topic decades ago. In 2001, the state created a task force to study the issue and subsequently led the nation in adopting a pilot project in the mid-2000s. In 2013, the Legislature created what became its voluntary OReGo program that allows drivers to opt in and pay a per-mile charge, now 1.8 cents.

Drivers of gas-powered vehicles receive a credit on gas taxes paid, but that credit can’t exceed the charges paid for miles driven in a given month. The state has just 714 vehicles participating in the program out of more than 3.4 million registered statewide.

Michelle Godfrey, a spokesperson for the program, said the financial benefits of the current program for state highway trust funding are “negligible.”

“It will never earn revenue until there’s some kind of mandate,” she said in an interview.

According to state figures, 376 of the cars enrolled in the system are gas-powered. Drivers of electric vehicles and vehicles with 40 mph or greater efficiency get a discount on vehicle registration fees. Under the new bill, they would no longer pay vehicle title registration when buying a car.

The Joint Committee on Transportation held a public hearing April 20 on the proposal, which was created by a state task force formed in 2001 consisting of transportation officials and advocates as well as local and state lawmakers.

Rep. John Lively (D-Springfield), the bill’s sponsor and that task force’s vice chair, said the legislation is intended to serve as a starting point.

“Many of us feel we should make the transition faster than that,” he said of the 2027 timeline.

Lively also noted that there would be millions of cars on the road not required to participate.

“We still have an enormous amount of transition to do,” he said.

According to some who testified before the Legislature on April 20, Oregon risks losing its status as a transportation innovator because the bill as written does nothing to discourage drivers from buying gas-powered vehicles.

“It makes a bad situation worse,” Angus Duncan, former chair of the Oregon Global Warming Commission, told lawmakers April 20. “It will increase the cost of driving an efficient vehicle while continuing to reward drivers of gas guzzlers.”

Duncan, one of the 700 or so Oregonians who participate in the voluntary program, said it doesn’t make sense to give electric vehicles a rebate like the state did through its landmark 2017 transportation bill then turn around and require only fuel-efficient vehicles pay the fee. Many environmental advocates argue that lower fuel-efficiency car owners aren’t feeling the economic price of their car choice enough. State officials note that so-called gas guzzlers are still paying gas taxes and vehicle registration fees.

He suggested Oregon do what California and Washington are considering, which is link drivers’ vehicle-miles-traveled fee to a formula that factors in the fuel efficiency of their vehicles. Another option would be to simultaneously increase the gas tax further and index it to inflation.

Duncan said the state’s global warming commission recommended adopting a vehicle-efficiency formula with a miles-traveled fee as early as 2011. He called the current proposal a “backwards step on climate.”

State transportation officials say the 2027 timeline is predicated on an estimate that one-third of new cars will meet the 30 mpg or greater threshold.

Some legislative amendments introduced this week take stabs at doing more. One proposal would eliminate the fuel-efficiency standard and require all drivers of new vehicles pay the fee. Another amendment, backed by Rep. Susan McLain (D-Forest Grove), would eliminate the fuel-efficiency requirement while requiring some vehicles’ owners to pay an additional fee to reflect the damage greenhouse gas emissions inflict on the environment.

Vivian Satterfield, director of strategic partnerships at Cully-based Verde, said the state should do more to raise costs for fossil-burning vehicles. She said that increasing operating costs on vehicles that burn less fuel per mile “undercut’s the state’s goals.”

She also raised concerns that the bill doesn’t address the transportation costs low-income Oregonians already face, saying the plan needs to be “structured from the beginning” to address those inequities.

McLain asked Duncan whether he supported her amendment or if he would prefer doing nothing. He said the amendment was better than nothing at all, but he said the bill still doesn’t do enough. “We’re making progress on utility emissions, but we are losing ground on transportation emissions every year,” he said.

Transportation accounts for about 40% of Oregon’s greenhouse gas emissions. The state estimates that, under the current proposal, owners of lower fuel-efficiency vehicles still would pay more than vehicle-miles-traveled fees per mile, plus the full vehicle registration and title fees.

Portland transportation and planning officials wrote a letter supporting the bill but said it must be clear that cities have a right to impose their own road user charges if they choose to. Portland voters have twice approved a 10-cents-per gallon gas tax.

“Road user-charge programs should be structured in a way that allows for the future incorporation of variable pricing related to demand, climate and equity,” wrote Chris Warner and Andrea Durbin, directors of the city transportation, and planning and sustainability bureaus, respectively.

Other lawmakers expressed concern about privacy, including GPS tracking software needed to report mileage. Rep. Paul Evans (D-Monmouth) said having a flat fee to opt out of the per-mile charge could be a revenue generator.

“I think we’ll be surprised by how much revenue that might raise,” he said, adding that concerns over privacy are real issues.