The 12 months I’ve spent as chairman of American Trucking Associations provided a whirlwind of great experiences and key victories for trucking. They also provided some career highlights.

These 12 months also brought change to ATA: Under the leadership of CEO Chris Spear, the federation has redefined its vision for itself — and the industry. The tough decisions that we made were the right ones and, as a result, ATA is a stronger institution.

I have said repeatedly that the best way to make our industry stronger is for trucking to tell its story. Over the past year, I believe we have done so. 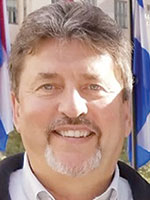 Whether we were meeting with the local news in Dayton or the president of the United States, we carried our message about trucking’s record of safety, importance to the economy, and professionalism to all audiences. We heightened the image of trucking to the American public and built greater pride within our industry.

These efforts have not gone unrewarded. Yes, we remain victims of unfounded attacks from media and lawmakers on the character of our drivers and our industry, but we’ve also seen tremendous improvements in positive polling. It’s been amazing to see the transformation as people learn more about the good side of trucking. For example, talking about National Truck Driver Appreciation Week with someone who learned about it on the news. Or chatting in the airport with someone who noticed my “I ♥ Trucks” button. These efforts go a long way toward introducing the public to the good work we do.

Lately, much of that conversation has centered on how our president famously wore the “I ♥ Trucks” button when we met with him at the White House. I had the honor of giving President Trump that button, which became a topic of conversation when we met with him and Vice President Mike Pence and also in ATA’s meetings with Transportation Secretary Elaine Chao on her fourth day in office and with lawmakers.

My button is a “conversation starter,” and so is Safety Sammy, our industry mascot. We introduced Safety Sammy to the public this year, and the truck-like mascot brings positive attention to our industry.

One issue that could benefit from more positive attention is the driver shortage. We have done a great deal of outreach, but we need to do more. I expect we will start making headway soon in addressing our need for quality drivers.

Since I received my commercial driver license, I often visit the local driving school on students’ first day of class. Each new class is thirsty for knowledge about the industry, and this makes clear to me that improving our workforce development efforts is vital to trucking’s future. It’s an ­issue that hits home for me. There is tremendous talent that we can and must tap into to meet the demands of our shippers. This next generation of drivers is key to our success.

It’s also our job to support the 3.5 million professional U.S. truck drivers by making their lives on the road as safe and comfortable as possible. We can do this by providing safety training, incorporating technologies that make sense for our companies and by continuing to improve the desirability of truck driving jobs.

It’s a serious issue that I discuss with drivers at my fleet, Jet Express Inc., and with America’s Road Team captains. Getting feedback from them is some of the most powerful information an executive can have. Truck drivers, such as those I met while attending the National Truck Driving Championships, must be the focus of the decisions we make as an industry.

One thing I’ve learned since being involved in advocacy at ATA is that our agenda must be guided by the impact potential policies could have on drivers. If we’re pursuing tax reform, it’s to create more jobs for drivers. If we’re pursuing infrastructure funding, it’s to make highways a safer place for them. When we pursued hours-of-service reform, our goal was to simplify the rules for them.

We can only secure those victories if, as an industry, we are all involved.

If you’re reading this as an ATA member, that means participating in our Calls on Washington, in our image programs and in the policymaking process. During my term, we created the Infrastructure Funding Task Force, which has done great work by offering solutions to our highway funding crisis.

If you aren’t a member, it means getting involved with ATA or with your state association so you have representation in Washington. ATA can tell our industry’s story, but that story is stronger with your voice.

I want to thank all the drivers, technicians, dispatchers, state executives and fleet executives who I met during my time as chairman. I spent the past year telling trucking’s story. It was a tremendous chapter in my life, and it wouldn’t have been possible without your support.

Kevin Burch also is president of Jet Express Inc., which is based in Dayton, Ohio. American Trucking Associations is the largest trade federation in the trucking industry and has headquarters in Arlington, Va., and affiliated associations in every state. ATA owns Transport Topics.