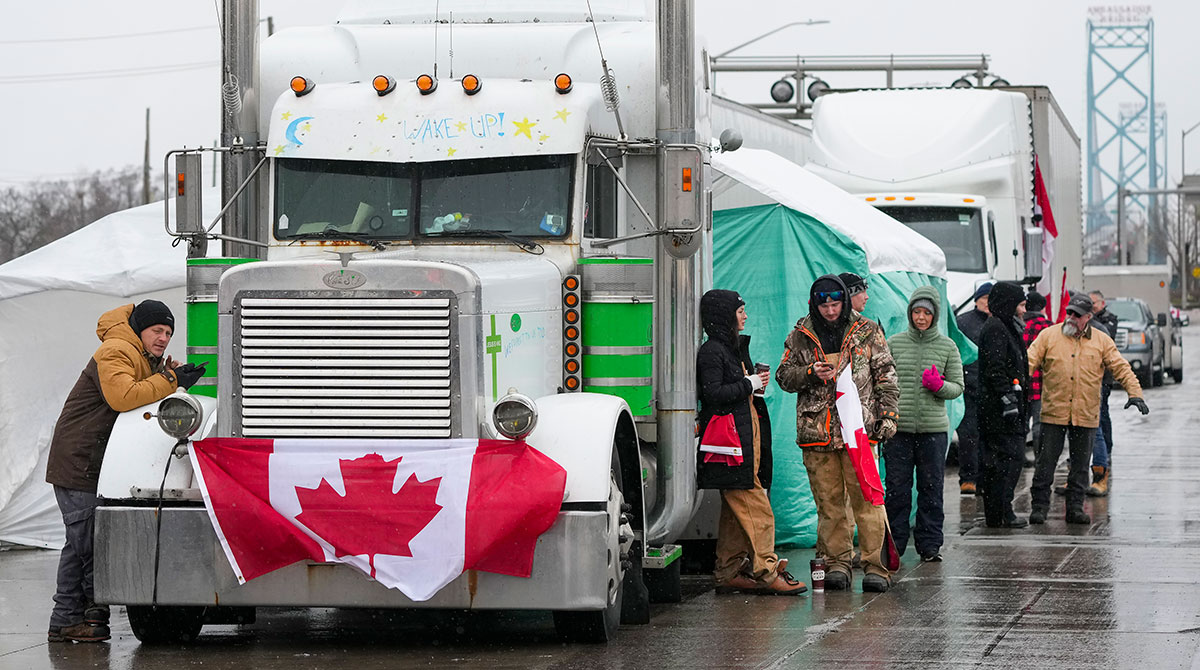 Truckers and supporters block the access leading from the Ambassador Bridge in Windsor, Ontario, on Feb. 11. (Nathan Denette/The Canadian Press via AP)

The premier of Canada’s biggest province declared a state of emergency, warning protesters choking off traffic at a key U.S. border crossing and causing gridlock in Canada’s capital they face stiff punishment if they don’t leave.

Ontario Premier Doug Ford, in a news conference Feb. 11 alongside his solicitor general, said the government is enacting new powers to end the blockade, including issuing fines of up to C$100,000 ($78,800) and jail time.

The Ambassador Bridge from Windsor, Ontario, into Detroit has been largely closed since the night of Feb. 7. The conduit carries about one-quarter of the commercial trade between the U.S. and Canada. Automakers including General Motors Co., Ford Motor Co., Stellantis NV and Toyota Motor Corp. have been forced to curb production.

I touched base with @LOCAL444UNIFOR’s Dave Cassidy this morning. We spoke about the illegal blockades that are disrupting supply chains, endangering jobs, and threatening our economy. We’ll continue to stand up for workers – and be there to help get this situation under control. — Justin Trudeau (@JustinTrudeau) February 11, 2022

Ford called the situation “a pivotal moment for our nation” with “the eyes of the world” watching how Canada and its leaders confront growing public unrest over COVID-19 restrictions and the occupation of its capital city’s downtown core.

“What they are seeing, it’s not who we are,” Ford said. “This is not how we try to change things here in Canada. We do it through the ballot box.”

READ MORE: US Urges Canada to Use Federal Powers to End Bridge Blockade

The new powers Ford announced are temporary under the state of emergency, but he said he intends to enshrine them permanently in legislation. The declaration gives the government authority to shut down institutions and business, limit travel and seize property.

“We will also provide additional authority to consider taking away the personal and commercial licenses of anyone who doesn’t comply with these orders.,” Ford said.

CTV News and other media outlets reported that protesters had agreed Feb. 11 to clear enough space for a lane of traffic to travel from Detroit into Windsor.

A provincial court will hear a request for an injunction later Feb. 11 that would clear the bridge. Should that and other vital trade conduits remain closed by protests, Canada risks suffering a first-quarter economic contraction. Economists also warn that extend supply chain disruptions could further fuel inflation, already at a three-decade high.

The bridge demonstration is an offshoot of protests in Ottawa that began Jan. 28 as a bid to repeal vaccine mandates and other COVID-19 restrictions. The movement has spiraled into a catch-all public outcry against government intrusion under Prime Minister Justin Trudeau. Copycat demonstrations have taken place in New Zealand and France, and are threatening to spread into the U.S. in coming days.

Ford said the protesters in Ottawa have taken the city “hostage” over the past two weeks, as hundreds of semis and other heavy vehicles remain blockading downtown streets leading up to the federal parliament buildings.

“I call it a siege because that is what it is,” Ford said. “It’s an illegal occupation. This is no longer a protest. With a protest, you peacefully make your point and you go back home.”