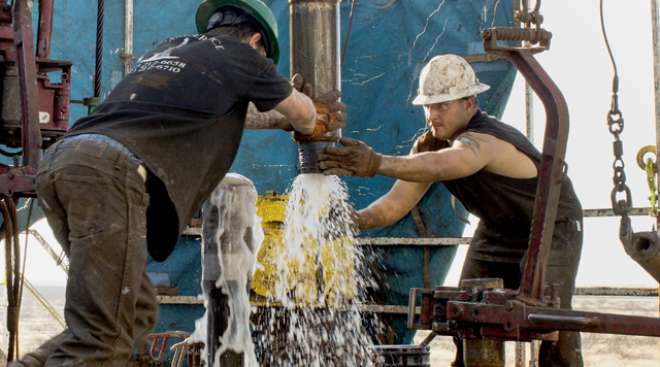 Oil tumbled to its lowest level in more than 12 years as crude stockpiles at the delivery point for New York futures expanded to a record.

West Texas Intermediate futures dropped to $26.14 a barrel, breaking below the $26.19 low from January to reach the lowest since May 2003.

Supplies at Cushing, Oklahoma, the biggest U.S. oil-storage hub, rose by 523,000 barrels to 64.7 million last week, according to government data. The site is considered full at 73 million barrels. The price difference between front-month WTI delivery and a month later was near the widest in five years.

"This is a hangover from yesterday’s Cushing data," said Bob Yawger, director of the futures division at Mizuho Securities USA in New York. "Global equities, currencies and bonds are being taken as negative demand indicators. We’re set to soon break the lows made last month and then $25 will be the big target."

Oil is down about 29% this year on speculation a global glut will persist as Iranian exports increase after the removal of sanctions and U.S. crude inventories remain swollen. U.S. stockpiles are more than 130 million barrels above the five-year average, even after dropping by 754,000 barrels, according to Energy Information Administration data.

Brent for April settlement declined 88 cents to $29.96 a barrel on the London-based ICE Futures Europe exchange.

"The Brent-WTI spread is widening again, which has me wondering if we are getting close to seeing a rise in exports," said Bill O’Grady, chief market strategist at Confluence Investment Management in St. Louis, which oversees $3.6 billion in assets. "It would be good for WTI, not so for Brent."