INDIANAPOLIS — After wrapping up the written exam portion of the National Truck Driving & Step Van Driving Championships, several competitors came away impressed with its attention to detail.

The exam, based on the Facts for Drivers guidebook, is meant to measure the truckers’ familiarity with industry rules and regulations.

Held on Aug. 16, the exam marked the first leg of the safety tournament. During the next two days, the more than 400 NTDC qualifiers will be tested on a pre-trip vehicle inspection and a safety driving course. Competitors are split up into nine vehicle classes, such as flatbed and step van.

“I just got to learn to study more,” Karen Roderick with FedEx Ground in Connecticut said immediately after taking the exam. Asked to describe what she enjoyed most: “The parts I knew.”

Competing in the straight truck division, Roderick is making her fourth trip to the national stage this year. Post-written exam, she maintained her enthusiasm. “I’m looking forward to tomorrow,” she said. “Just, get everything done: the driving and the pre-trip. So then Thursday I can go out and root for my other teammates.”

Carl Gibson, with the Washington delegation competing in the straight truck class, is making his NTDC debut.

After the exam, he said: “I’m grateful that I read that book about four times. To me, because of what I read, what I remember, the test: It was difficult.”

“I’m walking away thinking I scored at least 60% on the test,” he emphasized. Gibson drives for The Boeing Company.

Glen Winston, based in Louisiana, is competing in the 5-axle division. A driver with C&S Wholesale Services, Winston cited the exam’s high degree of difficulty. “There were questions that I didn’t know in there. But there were some that I did know. And it’s like a different level from states,” he explained. 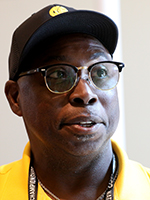 Adding for emphasis, “You had to really know, to know it.” Winston’s support network at the event consists of his wife, Cherryl, and his colleague Louis Scaruffi.

Competitors at NTDC who record a perfect score on the written exam will be recognized at the conclusion of the tournament on Aug. 19.