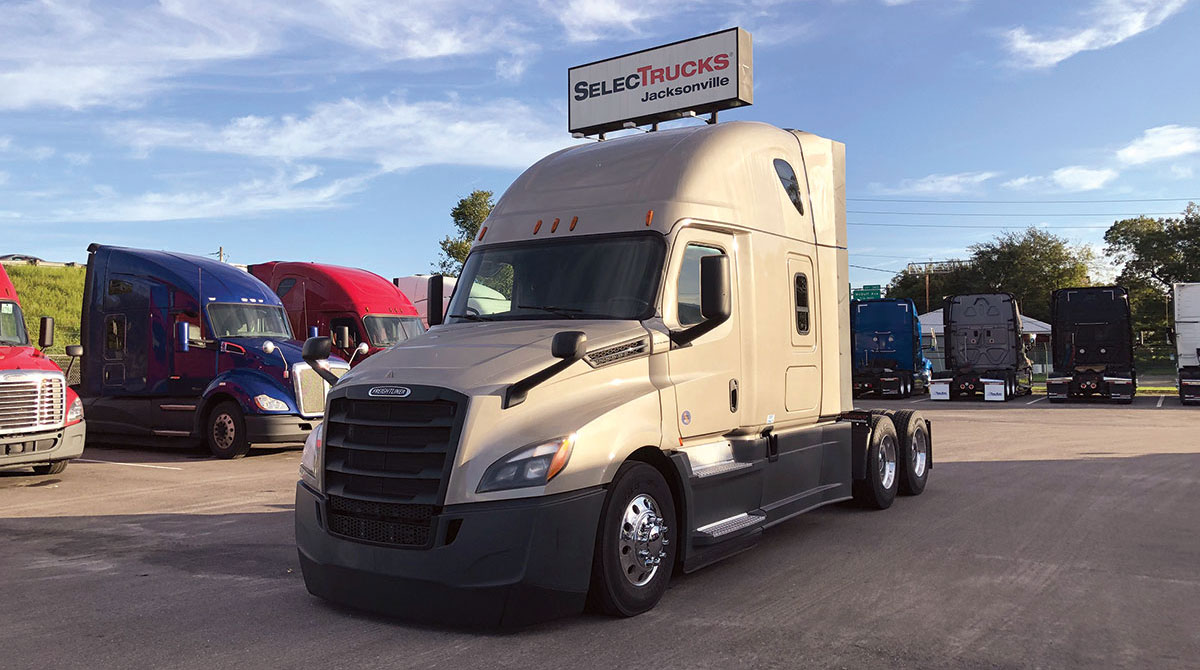 A Freightliner on the lot of a SelecTrucks dealership. (Daimler Trucks North America)

The average retail price of a used Class 8 vehicle in November bounced up 11.8% compared with the previous record just set in October and soared 67.8% higher compared with a year earlier, ACT Research reported.

If people aren’t buying [new], they aren’t trading in [old].

“The conversations we’ve had and the indicators we are watching suggest we may have less inventory now than when we talked about used trucks last month,” he said. “We thought we were starting to see a little influx on inventory, then new retail sales in November were stinky. What can you do? If people aren’t buying [new], they aren’t trading in [old].”

U.S. Class 8 retail sales in November were 16,539, or 7.1% lower compared with a year earlier, as results were mixed among truck makers, WardsAuto.com reported.

It was the year’s second-lowest volume, trailing only February’s 15,369.

The average age was 6 years, 4 months compared with 6 years, 1 month a year earlier.

November was the strongest month on record for all segments of the used medium- and heavy-duty truck market, according to Chris Visser, commercial truck senior analyst at J.D. Power Valuation Services.

“Buyers continue to pay retail pricing at auctions, to the point where trucks regularly bring higher pricing at auction than retail,” he wrote online. “Incoming December data shows the throttle firmly to the floor.”

Not all trucks, though, wind up in the used marketplace. Some fleets take used trucks and place them into a lease-purchase program for those wanting to be more independent compared with company drivers.

“We base it on the trade-in value of the trucks at the time from our dealer,” said Load One CEO John Elliott. “Not retail. But we are not in the business of lease-purchase as a big profit center [as much as] growing and enhancing our fleet.”

Load One is a transportation and logistics company based in Taylor, Mich., with 70 company drivers and 465 owner-operators.

Meanwhile, fleets with three-year trade cycles would typically be readying their 2019 trucks for replacement.

“But they are not going to be able to get enough trucks on the new side to be able to replace everything,” Tam said. “They are going to face allocations as well, but I don’t know to what degree.”

Simply put, it doesn’t matter what customers want; everything is going to be limited, paced by the manufacturers’ ability to produce, which is entirely dependent on the supply chain, he said.

Tam said the majority of retail used truck sales ACT is seeing is generated by dealers.

“That’s the normal course of business for most of these fleets. They do not have organizations set up around remarketing their own equipment,” Tam said.

Paccar Financial Services is offering buyers a $1,000 Visa gift card when they finance a Red Oval Certified Peterbilt truck through it.

The purchase must total at least $50,000 and be subject to at least 48-month financing terms.

For its International brand, Navistar extended its one-year engine and aftertreatment warranty through March 31, 2022, an offer it launched March 1.

The warranty applies to any pre-owned International LT or RH 2018 or newer models purchased anywhere. Among the conditions the trucks must meet are: less than 550,000 miles at time of sale with engines of 475 horsepower or less.

“I think the hardest thing, from a logistics standpoint, is getting a line on those trucks that are coming to the market and having whatever form of payment you are going to use when that deal hits. These trucks are not sitting on lots for very long,” Tam said. “In some cases, I think they don’t even get to the lot. They just go from one customer to the next, it seems like.”