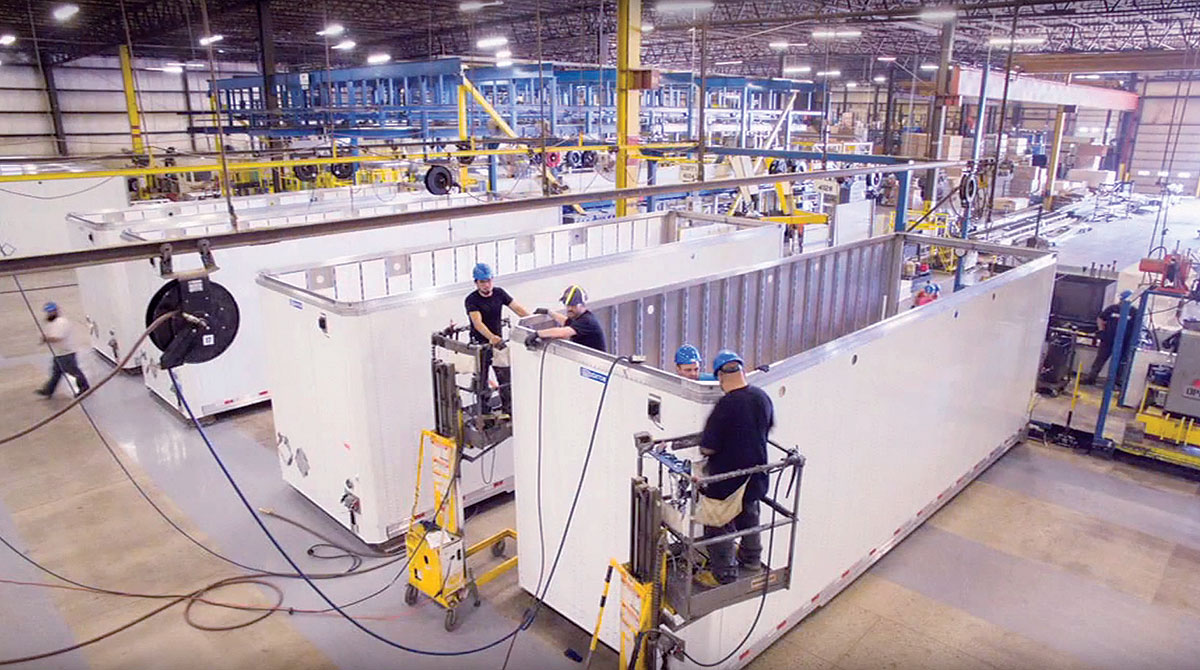 Orders landed at 19,800, compared with 45,002 a year earlier. ACT will update its initial tally once trailer makers provide final data.

“We do hear reports of added production capacity underway in the market here in the states,” Frank Maly, director of commercial vehicle transportation analysis, told Transport Topics. “Adding production capacity isn’t a short-term decision; reducing capacity, likewise, isn’t a short-term decision. Capacity may be there, but you may be running the line at the rate lower than you anticipated.”

Along with slowing orders, largely reflecting replacement needs, it appears dealer inventories already are high as well — but a December drawdown is typical, Maly added.

One trailer maker executive said the industry needs to begin now to balance its excessive capacity with demand.

“The trailer industry needs to adjust down in capacity to some degree to get it to where the demand meets the capacity,” said David Giesen, vice president of sales for Stoughton. “How that happens is what still needs to play out.”

He suggested that the adjustment could come in the first quarter because there are slots without orders to fill them. If production capacity isn’t reined in, then lines will continue to build trailers simply to add inventory.

Others have said that situation lends itself to price wars, set in motion to move the accumulated inventory once the softer market begins to improve.

FTR pegged November’s net orders at 19,850. Production continues to fall moderately on a per-day level, as freight growth has stalled. There still is a decent demand for dry vans and reefers, but the vocational segments — especially flatbeds — continue to weaken, according to the company.

“There is no reason to order in large quantities like last year. The supply of trailers has almost caught up with the demand for trailers, so ordering levels are flattening out and fleets are watching the market closely. There is still too much uncertainty,” said Don Ake, vice president of commercial vehicles for FTR.

Trailer makers said they were adjusting to the slowing demand.

“The [younger] average age of the trailer fleet and the rate at which trucking companies are closing is causing what might otherwise have been a moderate correction into something more significant, at least in the short term,” James said. “I am not thinking this is yet anything more than a return to normal demand level with perhaps a further short-term correction thrown in.”

Two of the three main sources of freight, personal consumption and construction, remain robust, James added. “If we can just rebuild confidence in the manufacturing sector and get factories producing again, I believe we will be OK.”

Utility Trailer Manufacturing Co. has been on attrition in almost all plants for several months, said Senior Vice President of Sales Craig Bennett, but reduced the workforce only in its flatbed plant in Alabama.

“We all have to remember that we are in our 10th up year in trailer production since 2009’s bottom. We live in a cyclical industry, so reduced forecast for 2020 is not unexpected,” Bennett said. “Hopefully, with clarity on the trade deals — USMCA and with China — that will bring some stability to the goods flow and help the trucking industry’s volumes.”

Stoughton has not reduced headcount but is controlling overtime, Giesen said. “We are back into a much more normal demand market and volumes. Even though it is a decline, it will still be a good year historically.”

Meanwhile, the California Air Resources Board announced recently it was suspending enforcement for at least two years of its Phase 2 greenhouse gas (GHG) trailer standards, which had been set to go into effect Jan. 1.

CARB Advisory to Trailer Ma... by Transport Topics on Scribd

“The trucking industry has numerous new technologies to evaluate and absorb and still compete in an environment of reduced rates and somewhat reduced volumes,” he said.

James agreed that the delay was welcome news.

“The CARB action has eased an administrative burden on the trailer makers and, for now, has sidelined potentially expensive changes in specifications for the fleets and trailer lessors,” he said.

Giesen said it was “simply good news” for any trailer dealer in California.

Under the CARB rule, now suspended, trailer manufacturers had to certify to California standards and receive an executive order from CARB to legally sell trailers in California.