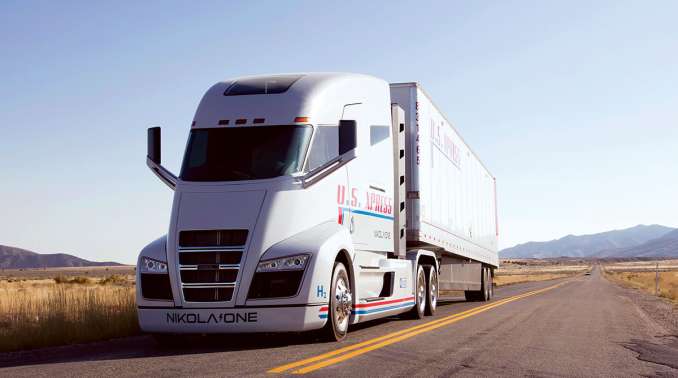 Nikola Corp. said it will start full-scale output of battery-electric trucks next month and deliver between 300 and 500 of the big rigs to customers this year. Its shares rose despite a slump in the broader market.

The Feb. 24 announcement that it is moving beyond production of prototypes indicates a touch of progress as Nikola attempts to recover from supply chain woes that have affected the launch of its products. It also faces a credibility crisis after founder Trevor Milton was indicted and accused of lying to investors about the company.

Nikola began pilot operations for prototype hydrogen-powered fuel-cell trucks in January with Anheuser-Busch InBev NV. Selling those FCEV big rigs are its ultimate goal, but the Phoenix-based company has encountered numerous delays and setbacks. Nikola plans to start FCEV production in the second half of next year.

Nikola’s stock had dropped 31% this year through Feb. 23.

Nikola on Feb. 24 reported an adjusted loss of 23 cents a share for the fourth quarter, narrower than the 32-cent loss projected by analysts surveyed by Bloomberg. The company has yet to generate revenue. Nikola will start delivering revenue-generating trucks in the second quarter, CEO Mark Russell said on a conference call with analysts.

The first phase of construction on the company’s Coolidge, Ariz., plant will be completed by the end of this quarter, Nikola said. The facility currently can make as many as 2,500 trucks a year. A second facility, in Ulm, Germany, which Nikola operates jointly with CNH Industrial NV’s Iveco unit, has been completed and can assemble 2,000 trucks annually.

Last month, Nikola announced a long-term battery supply deal with Proterra Inc. And on Feb. 22, the truckmaker announced it had hired Michael Lohscheller, who oversaw the turnaround of Stellantis NV’s Opel division, to help ramp up production.

Nikola said it has made its first payment as part of a $125 million civil settlement with the U.S. Securities and Exchange Commission regarding statements by Milton, who was force to resign. The company is seeking reimbursement from him.

Nikola announced separately that Inclusive Capital Partners co-founder Jeff Ubben resigned from the board on Feb. 17 and was replaced by Lynn Forester de Rothschild, also of InCap.