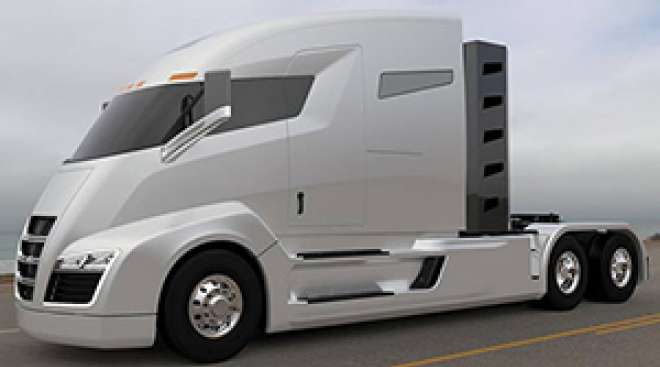 Nikola Motor Co. said it has received more than 7,000 reservations for its yet-to-be-unveiled electric Class 8 truck, the Nikola One.

The company says the reservations represent $2.3 billion and were generated in the first month. Reservations for the electric truck are $1,500 and 100% refundable, according to its website.

“Our technology is 10-15 years ahead of any other OEM in fuel efficiencies, mpg and emissions. We are the only OEM to have a near-zero emissions truck and still outperform diesel trucks running at 80,000 pounds. To have more than 7,000 reservations totaling more than $2.3 billion, with five months remaining until our unveiling ceremony, is unprecedented,” Trevor Milton, Nikola Motor Co. CEO, said in a statement.

The Nikola One is said to be capable of pulling 80,000 pounds with a range of more than 1,200 miles between stops. The truck has a 335-hp electric motor and dual gear reduction at every wheel, and offers a fully independent suspension — an industry first, according to the company.

“The Nikola One’s electric motors are powered by a liquid-cooled 320 kilowatt-hour, lithium-ion battery pack [more than 30,000 lithium cells], which is charged by a proprietary onboard Nikola Motor Co. turbine. The turbine automatically charges the batteries when needed and eliminates the need to ever plug in,” the company previously said.

The turbine powers the battery bank and runs on natural gas but can be configured to run on diesel or gasoline, according to the company. The truck is capable of climbing a 6% grade at maximum weight at 65 mph, but a typical Class 8 diesel truck under similar conditions “would have a hard time reaching 35 mph.”

The company says it will unveil the truck Dec. 2 during an event in Salt Lake City for media and reservation holders and for certain fleets and leasing companies.

“We believe we will pass the current market leaders like Daimler, Paccar, Volvo and Navistar in sales orders within the next 12-24 months. Just imagine the orders that will come in, once we begin taking dealer applications. We have shown other OEMs and their shareholders why they should be nervous about Nikola Motor Co. Some of the top Class 8 dealerships in America have reached out and are willing to either add our brand or move away from their existing brands,”  Milton said.