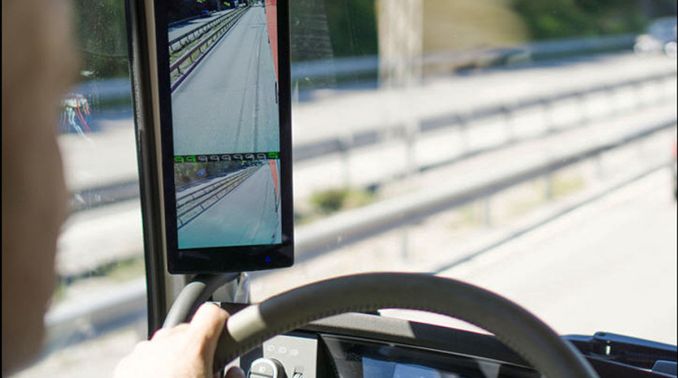 The National Highway Traffic Safety Administration is seeking comments on an advanced notice of proposed rulemaking that could lead to camera-based, rear-visibility systems replacing mirrors on heavy trucks and cars.

The ANPRM, published in the Federal Register on Oct. 10, is in response to two rulemaking petitions from manufacturers seeking permission to install camera monitoring systems on light vehicles and heavy trucks. The ANPRM builds on the agency’s prior efforts to obtain supporting technical information, data and analysis on camera monitoring systems so that it can determine whether the systems can provide the same level of safety as the rearview mirrors currently required under federal regulations.

The agency said its responsibility in carrying out its safety mission is not only to develop and set safety standards for new motor vehicles and motor vehicle equipment, but also to modify existing standards to respond to changing circumstances, such as the introduction of new technologies.

“Examples of previous technological transitions that triggered the need to adapt and/or replace requirements in the Federal Motor Vehicle Safety Standards include the replacing of analog dashboards by digital ones, the replacing of mechanical control systems by electronic ones and the first production of electric vehicles in appreciable numbers,” the agency announcement said.

The petitions referenced in the Register post include one from the Alliance of Automobile Manufacturers and Tesla Inc. pertaining to light vehicles, and one from Daimler Trucks North America relating to heavy vehicles. Comments to the agency must be submitted by Dec. 9.

Under current law, trucks and buses must have two outside mirrors positioned to show the driver a view of the highway to the rear, and the area along both sides of a commercial motor vehicle.

In December, the Federal Motor Carrier Safety Administration granted a five-year exemption to MirrorEye Inc. The company has been developing and deploying multiple digital cameras mounted on the exterior of commercial vehicles in an aerodynamic package that provides environmental protection for the cameras and a mounting location for optimal visibility.

Each camera has video processing software that presents a clear, high-definition image to the driver by means of a monitor mounted to each A-pillar of the CMV, the structural member between the windshield and door of the cab.

MirrorEye said that attaching the monitors to the A-pillars avoids the creation of incremental blind spots while eliminating the blind spots associated with conventional mirrors. The company has said that its camera mounting system meets or exceeds current federal visibility requirements.

An October 2018 NHTSA “examination” of a passenger car equipped with a rear-camera system showed that while system display glare caused by sunlight was a foreseen issue, only minimal such glare was observed. 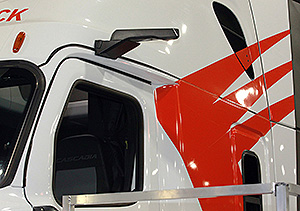 “CMS image clarity was good, comparable to that of outside rearview mirrors,” researchers concluded. “Visibility was especially good during dusk and dawn conditions when the displayed areas appeared brighter than would be seen with traditional mirrors.”

However, aspects of the prototype system’s performance included excessive blooming and lens flare from headlights of other traffic at night, the examination concluded.

“Other issues included image obscuration due to water droplets remaining on the camera lens while driving and high display brightness that in dark driving conditions may glare and annoy drivers, as well as make discerning of forward objects more difficult,” researchers said. “It is currently unclear whether these issues may be adequately remedied in a cost-effective manner.”

NHTSA said it has been made aware through media reports that some portion of the driving population may not be “physiologically capable of using the rear-camera systems.”

Although NHTSA said it believes that CMS is a promising technology, the agency has some lingering safety concerns that it believes should be addressed prior to deciding whether to propose amending federal regulations to permit CMS as a compliance option for rear visibility.

“NHTSA invites comments on all aspects of permitting camera-based technologies to be installed as an alternative to mirrors to meet the FMVSS No. 111 rear visibility requirements,” the announcement said. “However, the agency requests that commenters provide as much research, evidence, and/or objective data as possible to support their comments to inform the agency in determining the appropriate next steps.”

13 Steps to Get Drivers Onboard with In-Cab Cameras