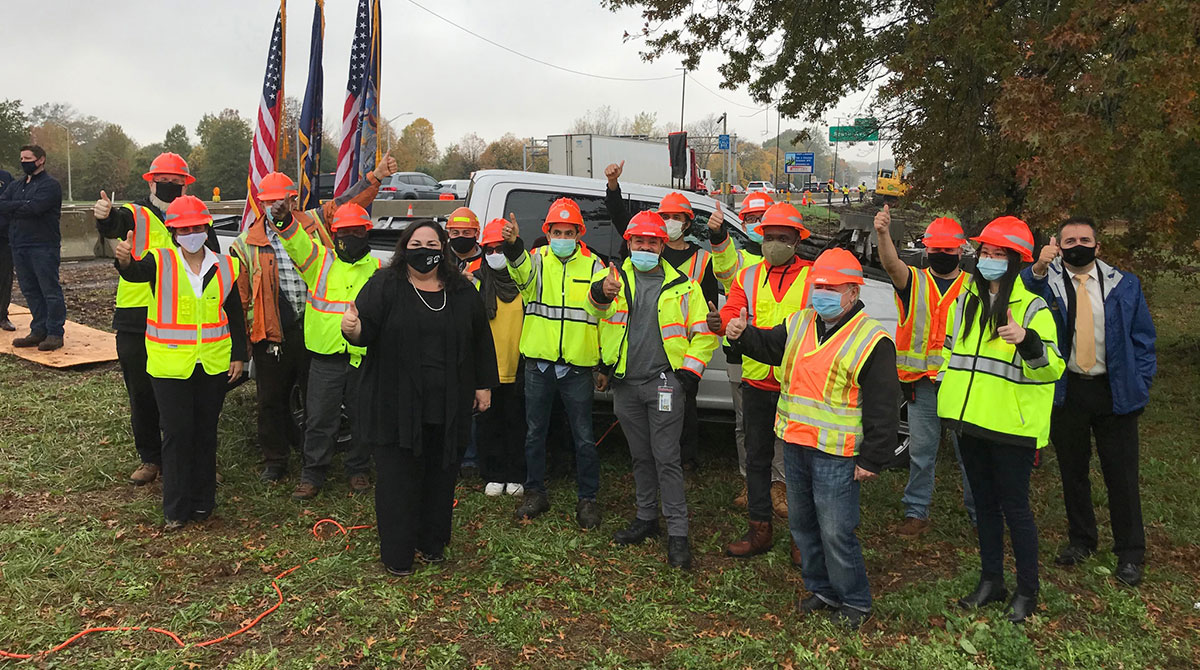 NYSDOT Commissioner Marie Therese Dominguez and the road crew constructing the auxiliary lane on a section of the westbound Staten Island Expressway. (NYCDOT via Twitter)

New York Gov. Andrew Cuomo recently announced that construction has begun on a project to create a continuous auxiliary lane on a portion of the Staten Island Expressway.

The Staten Island Expressway represents a portion of Interstate 278 that stretches east-west across Staten Island for less than 10 miles. In its entirety, I-278 runs for about 35 miles, linking Linden, N.J., to the Bronx, N.Y.

The project is meant to reduce congestion and improve safety on a westbound portion of the expressway in Staten Island. Specifically, the project will connect the entrance and exit ramps between the northbound Dr. Martin Luther King Jr. Expressway entrance ramp and the South Avenue exit ramp. 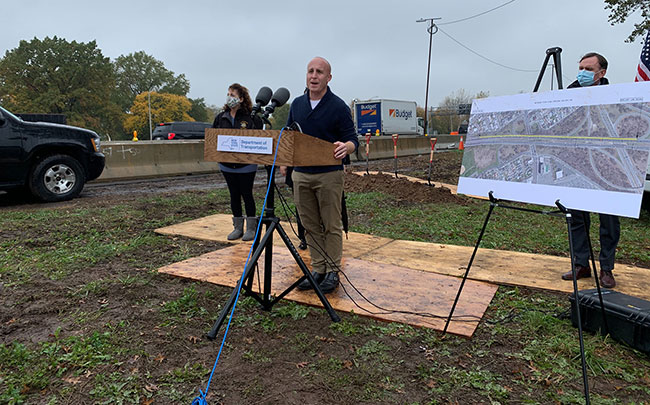 The result will be a continuous auxiliary lane, which will extend for more than half a mile and offer drivers a longer distance to merge on and off the expressway. The auxiliary lane will also allow motorists coming from Dr. Martin Luther King Jr. Expressway to access Richmond Avenue and South Avenue without having to merge onto the Staten Island Expressway.

“As more and more people return to our roads, it is critically important that we continue upgrading infrastructure to enhance safety for motorists and reduce congestion,” Cuomo said in an announcement released Oct. 26. “This project will deliver a better highway for motorists and improved local streets for Staten Island residents, enhancing New York’s transit network to better meet current and future demands.”

Additional improvements will include two new overhead sign structures, new guide rails and LED lighting. The westbound portion of the expressway within the project limits will be milled and paved with new markings.

The project is scheduled for completion in spring 2021. One goal of the project is to improve traffic conditions on the expressway itself for people moving through Staten Island and on surrounding roads for residents traveling locally.

“Staten Islanders have always been intimately familiar with the constant traffic and congestion on the Staten Island Expressway and local streets surrounding it,” said Michael Cusick (D-Mid Island), a member of the New York State Assembly. “[The] announcement of the creation of an auxiliary lane will provide much-needed congestion relief between the Dr. Martin Luther King Jr. Expressway entrance ramp and the South Avenue exit ramp. It will also ease up congestion on the surrounding residential streets, which will come as a relief to both motorists and residents.”

This project comes about two years after construction wrapped on an auxiliary lane project for Staten Island’s West Shore Expressway. According to Sen. Andrew Lanza (R-Staten Island), a small but well-planned roadway adjustment can have a positive impact on overall traffic flow.

“There’s no denying that the logjam on the Staten Island Expressway around Richmond Avenue has plagued us for years,” said Rep. Max Rose (D-N.Y.). “After the progress we’ve seen since the governor added a similar auxiliary lane on the West Shore, I’m confident that the combination of this new lane on the [Staten Island Expressway], along with the thousands of out-of-state trucks coming off the highway each day thanks to split-tolling, will be another great step forward in ending our commuting nightmare.”