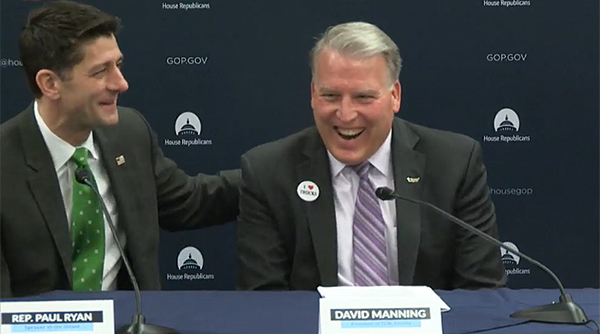 Reductions in his company’s tax bill resulting from the 2017 GOP-led law allowed the firm to invest in wages for drivers, explained Dave Manning, president of Nashville, Tenn.-based TCW Inc. He was joined by representatives from other industries to explain to lawmakers the effects the tax overhaul are having on their businesses.

“I think everybody knows that trucking is the engine that moves America’s economy and it is booming right now thanks to this tax reform and tax cuts,” said Manning, noting that because of accelerated depreciation his firm has been able to invest $20 million in new trucks, trailers and intermodal chassis.

“The really good news is that, so, for the first quarter of this year our turnover rate has been the lowest it’s been in 30 years. We’re convinced that’s because of the change in benefits and increase in wages that we have,” Manning added.

House Speaker Paul Ryan (R-Wis.), who announced recently he would not seek reelection, and nearly all of his Republican colleagues have been touting the passage of the tax overhaul. Republicans argue the law will assist small business owners financially in the near- and long-term. 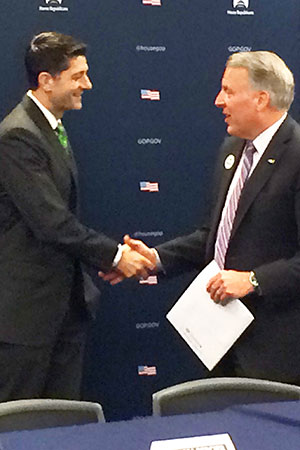 “We’re very excited about the millions of workers who’ve gotten bonuses with the hundreds of billions of dollars of capital expenditures investing in businesses,” said Ryan, adding, “Our ultimate goal here is to get this economy hitting its potential, get workers getting better wages and having more opportunities for people who for about a decade had a pretty rough economy.”

“I feel like America is back, especially on Main Street,” Brady said. “Optimism among our Main Street businesses is at about a 20-year high.”

The overhaul is President Donald Trump’s key legislative achievement. At the White House on April 12, Trump celebrated the tax law’s potential benefits alongside business executives, including members from the trucking industry.

Aside from overhauling tax policy, the president has struggled to reform an Obama-era health care law and he indicated advancing his $1.5 trillion infrastructure funding package likely would occur after the November midterm elections.