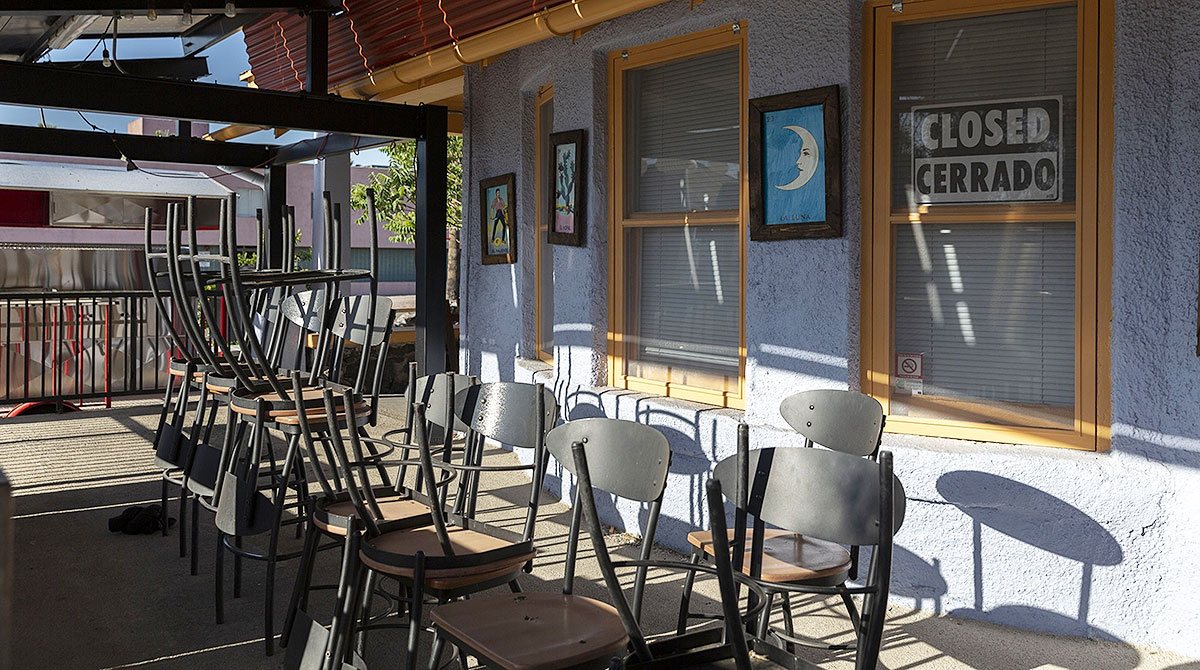 Chairs are stacked outside a temporarily closed restaurant in Tucson, Ariz. (Cheney Orr/Bloomberg)

Just how deep and swift the U.S. economy’s plunge into a recession has been since the coronavirus pandemic hit the nation was evidenced by a number of reports, including that millions continued to apply for unemployment benefits.

But a slow economic recovery could be coming this summer and into the fall as people begin to go back to work, economists said.

The U.S. Department of Labor said on May 28 that 2.1 million still sought assistance, bringing the running total of those out of work since the coronavirus shutdowns in mid-March to some 41 million. By April, the nation’s unemployment rate was 14.7%, the highest since the Depression.

Further, the gross domestic product, the broadest measure of economic health, was revised to show that it fell at an annual rate of 5% in the first quarter, greater than the 4.8% drop estimated in April.

The outbreak has killed at least 100,000 people in the United States and shuttered businesses, particularly small ones.

The U.S. Department of Commerce said purchases of durable goods — items intended to last three years or longer ranging from washers and dryers to cars and airplanes — plummeted 17.2% in April as shoppers spent only on things they urgently needed. That followed a 16.6% decline in March. Excluding orders for transportation equipment, durable goods orders fell 7.4%.

The falloff has implications for trucking, which hauls the goods. The impact is further evidenced in shipment of goods for the home after a record collapse in April of home purchases.

"In the coming months, buying activity will rise as states reopen and more consumers feel comfortable about homebuying in the midst of the social distancing measures," said Lawrence Yun, NAR’s chief economist. https://t.co/wuS2YnN6JN #NARPHS — National Association of REALTORS® (@nardotrealtor) May 28, 2020

The National Association of Realtors said its pending home sales index plunged 21.8% from the prior month to a level of 69, the largest decline registered in data going back to 2001. Pending home sales have fallen 33.8% from a year ago. (The index is a barometer of sales over the next two months when the transactions are completed.)

Transport Futures economist Noel Perry said for the short term he is quite pessimistic. “Rather than getting back to where we were in January or February of this year, we get maybe two-thirds of the way there, and we stay there.”

But, Perry said, trucking may escape the worst of the recession and be a leader in the recovery because of the essential nature it plays.

“There’s a suspicion, and there’s a little bit of that in the data, that the downturn for us in trucking will not be as bad as in the service sectors,” Perry emphasized. “But it’s still going to be a very disappointing year.”

Bob Costello, chief economist at American Trucking Associations, said it will be a “slog” forward.

“You’re going to have starts and stops, and people will say, ‘hey, this is pretty good,’ only to see it slow back down, especially if the virus flares up,” Costello said.

GDP growth, he said, could increase as much as 6% in the third quarter and 9% in the fourth quarter. Though the exact magnitude of the damage caused by the second-quarter shutdown of the economy and the resulting GDP drop are unknown, some economists estimate it will be 20% to 35%.

“We’re going to see historically strong growth rates, there’s no doubt about it, but because the second quarter fell so much, it will take at least a year, probably a year and a quarter, to get back to where we were,” he added.

The government is expected to release second-quarter GDP results on July 30.