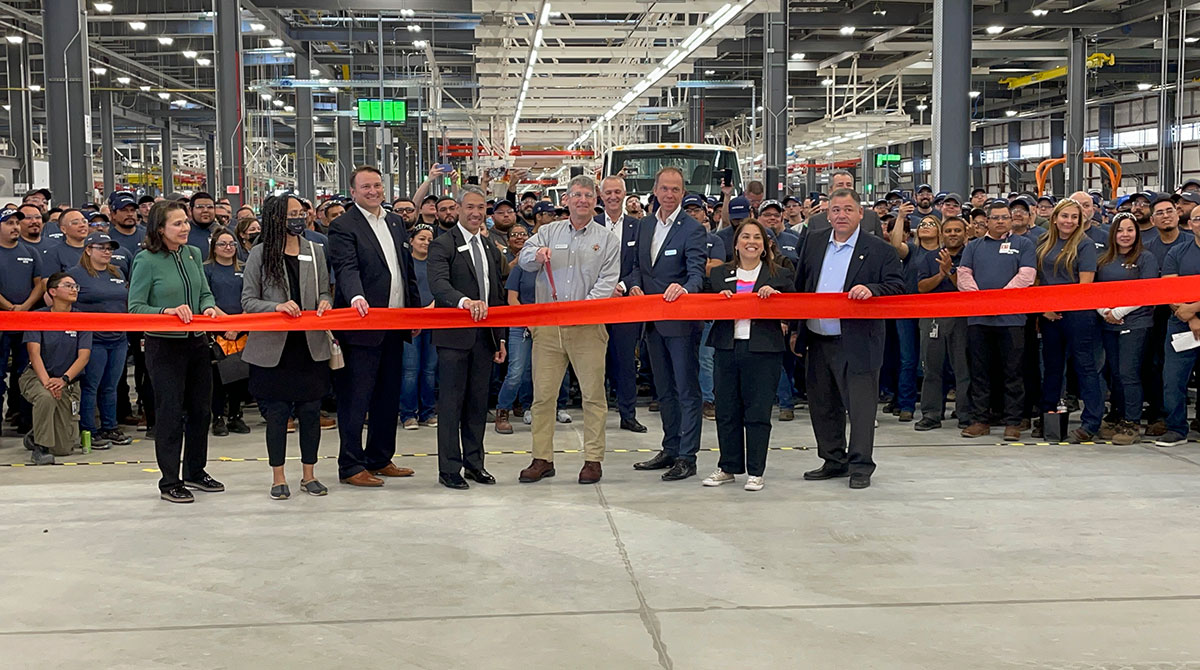 SAN ANTONIO — Navistar opened the doors to a new $250 million truck manufacturing facility that its leaders said positions the company to capitalize on current and emerging trends, while also providing room for growth into opportunities to come.

“In the coming 10 years, more will happen in the transportation sector than has happened in the last 100,” said Navistar CEO Mathias Carlbaum during a March 23 ribbon-cutting event here.

Media were provided a firsthand look at a facility designed to build both diesel- and electric-powered trucks, and will serve as a benchmark for other Navistar manufacturing facilities in terms of the company’s lean manufacturing principles to eliminate waste, improve product quality, drive operational efficiency, and reduce cost and time, the company said.

The San Antonio location was chosen to capitalize on proximity to the company’s supplier base in Texas as well as to its Mexico facility, noted Navistar area manager Stephen Mudd during a plant tour. 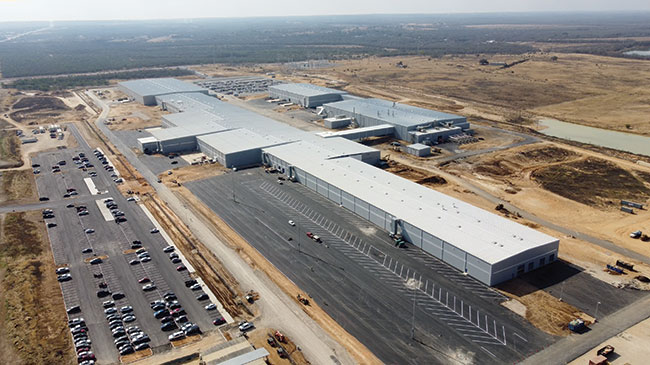 The factory is spread across four buildings on a 425-acre site that it does not fully occupy; Mudd noted that the facility could be replicated on the open space currently there, but said any long-term growth plans would be built around demand.

“We could duplicate what we have here over there in the future,” he said. “Or, as battery-electric grows, we could build a new plant for that.”

Already, however, work is underway to expand electric vehicle output capabilities in the new factory; bidding is open to construct a separate section of the assembly line specifically for EVs. Mudd said it will be six months to a year before construction begins on that area, but in the meantime diesel and electric trucks will come down the same line.

The first truck off the assembly line on Jan. 25 was an electric International eMV.

The facility currently employs about 400 workers, but plans to reach employment of more than 600 by summer. By then, Mudd said the facility will be able to achieve its maximum output capacity of 52 trucks per day. And there are myriad configurations possible, as there are 60,000 parts available for installation on the trucks to be built here.

Those being hired at the facility undergo a two-week orientation process, a step Mudd said is intended to “set employees up to be successful.” Especially since some are new to the work. “Some of them have never worked in manufacturing,” he noted. 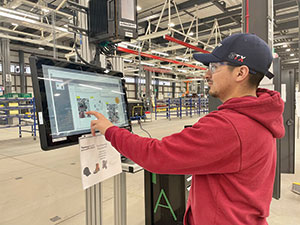 The plant is a paperless operation. Employees on the line can find details of the build and parts needed during each step of the assembly process. (Navistar)

That orientation process currently takes place at Navistar’s nearby Advanced Technology Center, but will eventually move into the San Antonio facility as part of the company’s plan to incorporate some ATC functions into the factory, he said.

These initiatives and the manufacturing processes being adopted at the factory — in concert with Navistar’s ownership under the Traton umbrella — will come to help the company thrive in the future, said Navistar EVP for global manufacturing Mark Hernandez. “I believe that this plant is going to lay the foundation for the future for Navistar for many years to come,” he said. “We are under new ownership, and the sky’s the limit for us for how we can take advantage of the North American market.”

The company also touted the cooperation it received from local leaders, including San Antonio Mayor Ron Nirenberg, who during the event welcomed the company’s arrival in the city.

“We are here today — and I’m enjoying the new plant smell, by the way — celebrating the beginning of what will be a very long and prosperous relationship between Navistar and our San Antonio community,” he said, noting that the pandemic did not slow the company’s progress in getting the facility completed.

Carlbaum also touted the relationships that he believes will help propel the facility’s growth. “It's the people that make the difference,” he said, noting that during his visit for the ribbon-cutting he found in San Antonio “a very friendly , optimistic, ambitious and will [to] win in the people I have met.”