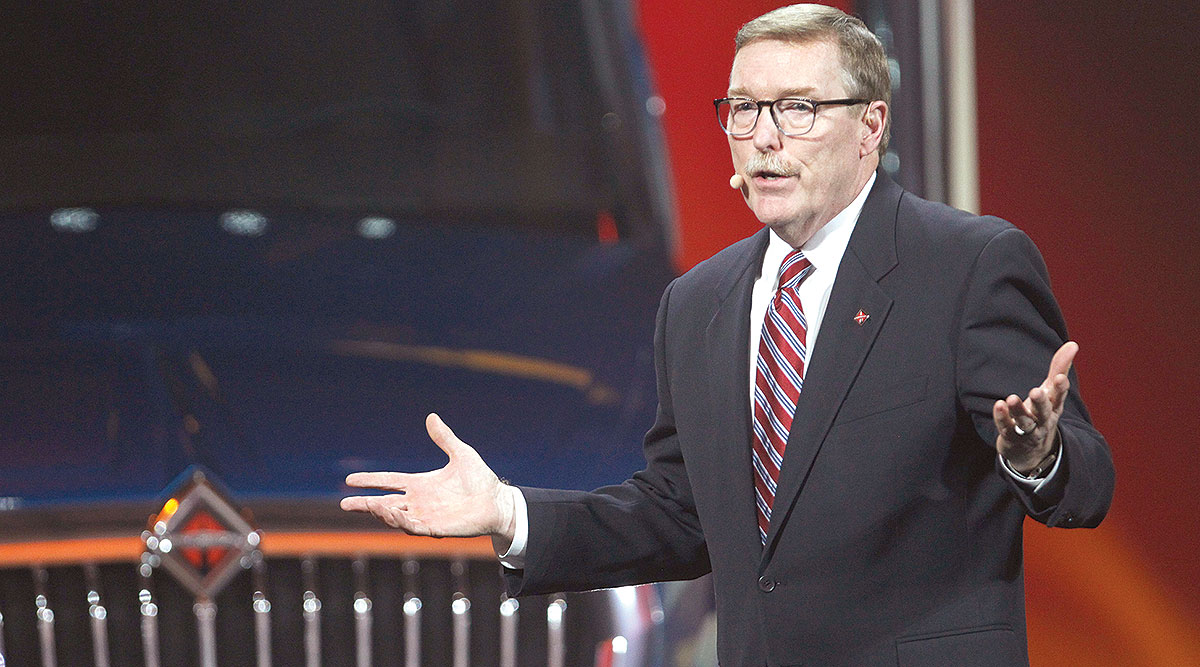 Navistar International Corp. achieved profitability during its 2017 fiscal year as it battles back from sustained losses, but the company’s chief executive said it’s not all about the money. More important, he says, are the growing indications that Navistar is winning back the trust of truck buyers compared with the situation it faced when it launched a turnaround effort a few years ago.

“Quite frankly, we knew these [financial] results were coming. We’ve planned, we’ve worked. This stuff was going to happen,” Navistar Chairman and CEO Troy Clarke said in an interview with Transport Topics following the release of the company’s latest earnings results Dec. 19.

“When we started this turnaround, we set up a new mission, a new set of values — we are going to do business in a different way,” he said.

Clarke cited a “palpable difference” now at Navistar with teamwork and collaboration in a flatter organization in which decisions are made sooner to sharpen focus on the right things. “And the right things are what the customer would have us be focused on,” he said.

In the 2017 fiscal year, the company gained 1.5 points of market share with its core products, offered new Class 8 products, and challenged and beat three other truck makers in a third-party administered test of fuel efficiency, he said. “These are the kinds of things we were looking for when we started these programs.”

All that is pointing to Navistar’s goal of becoming the most customer-centric truck company in North America, Clarke said. “We will get to this goal.”

Navistar is the parent company of the International truck brand.

The period ended Oct. 31 was Navistar’s second-consecutive profitable quarter, and just its third profitable quarter over the last 21 quarters. Also, the company achieved full-year profitability for the first time since 2011.

“There are a lot of great truck companies. There is no shortage of people who know trucks. But we believe we need to be in a position where customers make more money working with us than they do with anybody else. And they do that because we know what they need. That’s probably what I am most proud of,” Clarke said.

The company has been working to satisfy warranty claims, reclaim market share and unload used trucks it took back in the wake of troubles with its former ProStar model. That model came with the troubled MaxxForce 13 exhaust gas recirculation engines that were developed under the company’s former management, and since have been replaced with engines that use selective catalytic reduction emissions systems.

Navistar has prevailed in all but one lawsuit related to the EGR engines, Clarke said. “I don’t believe the [ongoing engine issue] will get in the way of the progress we anticipate we’ll make. It is not one of those legacy costs that will keep us from getting to escape velocity.”

Also, Clarke is watching three disruptive trends in the industry: autonomous vehicles, the digitization of the supply chain and vehicle electrification.

“What I have seen develop just over the last year is a tremendous desire to communicate and exchange points of view on how do we see these trends. I have major truck companies calling me saying, ‘Could you come see me and talk to me about how you are thinking about that kind of stuff?’ Because the companies are, in fact, pulling together their thoughts around that, as well,” he said.

Navistar is bullish on electrification and has announced plans for an electric medium-duty, Class 6 or 7 truck, by 2020, as well as an electric school bus by 2019.

“We think that is an important segment for us to penetrate because it allows us to get to scale faster, which allows us make profit in that segment faster. We think there is a higher societal benefit to taking a diesel truck out of an urban, congested environment,” he said. The medium-duty truck, developed with Volkswagen, is undergoing tests with European fleets.

Meanwhile, Navistar is feeling confident about meeting the next steps in the Phase 2 greenhouse gas emissions, he said, that call for greater fuel efficiency and lower CO2 and roll out in 2021, 2024 and 2027.

“These [Phase 2] regulations don’t exactly align with what is taking place in Europe, but they are directionally the same. So were able to share some of the technical-development burden with our Volkswagen partners. We are collaborating on what those future technologies need to be to meet that,” he said.