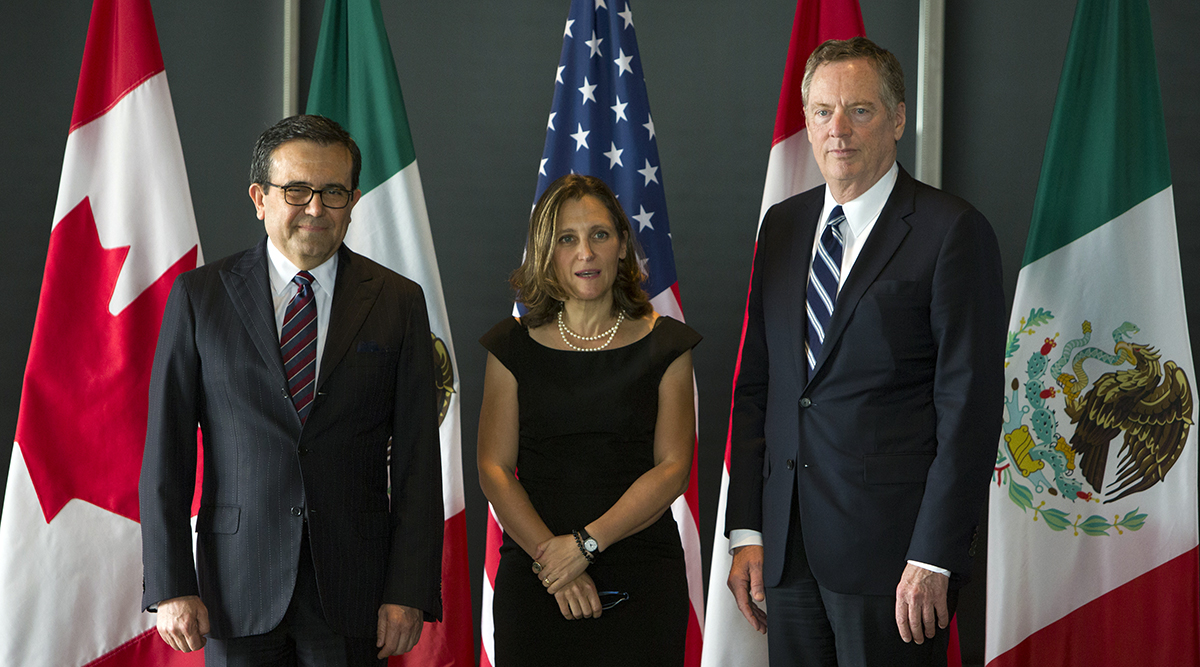 NAFTA talks are switching gears and slowing down as key obstacles emerge, with Canada and Mexico rejecting what they see as hard-line U.S. proposals and negotiators exchanging their strongest public barbs yet.

The ministers cast the longer timelines as a positive way to dig into tougher disputes, pledging to continue to work out a deal while acknowledging that strong differences remain. They next meet in Mexico Nov. 17-21.

“New proposals have created challenges and ministers discussed the significant conceptual gaps among the parties,” Lighthizer said, reading a joint statement at the close of the fourth round of talks. “Ministers have called upon all negotiators to explore creative ways to bridge these gaps.”

Their joint remarks to the press were the most heated since talks began in August. Lighthizer said he’s “surprised and disappointed by the resistance to change,” while Guajardo said Mexico has limits to what it can accept. Canada’s Freeland criticized a “winner-take-all mindset.”

“Yes we want an agreement, yes we want to find a win-win situation, but this won’t be at the detriment to our national interests,” Guajardo told reporters after the trilateral news conference ended.

Freeland said a deal that benefits the three countries can’t be reached with “an approach that seeks to undermine NAFTA rather than modernize it.” Still, she added that an agreement for an improved NAFTA is “absolutely achievable.”

In her own news conference, she stressed that a longer timeline shows “a pragmatic approach and goodwill.” Later asked why she was optimistic given the impasses, she said in French: “I don’t think I’ve used the word ‘optimist.’”

The Mexican peso jumped more than 1% on news of the 2018 timeframe for talks, while the Canadian dollar rose 0.2%, as investors bet it decreased the odds that the deal would fall apart any time soon.

President Donald Trump has called NAFTA a disaster and repeatedly threatened to withdraw the U.S. from the agreement, a step the White House can set into motion by giving six months’ notice to its partners. At stake is the $1.2 trillion in annual trade between the three countries, as well as the business models of companies such as Ford Motor Co. and General Motors Co. that have adapted their supply chains to take advantage of the trade zone.

We are in the NAFTA (worst trade deal ever made) renegotiation process with Mexico & Canada.Both being very difficult,may have to terminate?

Lighthizer told reporters he’s not focused on the possibility of the U.S. exiting the deal. “I’m focusing on trying to get a good agreement,” he said, though he added that the three countries would do “just fine” without NAFTA.

“Right now, it’s a great deal for the Mexicans and the Canadians, in my opinion. It’s a great deal for businesses that have decided they want to take advantage of the situation,” Lighthizer said. “Everybody has to give up a little bit of candy. That’s really what this is about.”

Trump again decried “massive trade deficits” with trading partners on Oct. 17 when speaking at the White House. “I’m not going to be allowing that,” he said.

In the joint appearance with his negotiating partners, Lighthizer also stressed that a core U.S. objective is to shrink its trade deficit. “We have seen no indication that our partners are willing to make any changes that will result in a rebalancing,” he said.

Toronto-Dominion Bank — Canada’s biggest bank by assets, with a significant U.S. presence — has stress-tested its credit portfolio for the possibility of a NAFTA collapse, CEO Bharat Masrani said, though he said it’s too early to draw conclusions.

“I wouldn’t start panicking or worrying at this stage; we’re early in the process,” Masrani said in a Bloomberg Television interview Oct. 17. “We’ve done stress testing — we are a bank after all — but my expectation would be that there would be some kind of a transition if we get to the unthinkable.”

Killing NAFTA would cause “bedlam” in the auto industry, said David White, executive vice president of supply chain for Winnipeg, Manitoba-based New Flyer Industries, the largest transit-bus manufacturer in North America. “Economically and financially, it would make no sense.”

Following the Mexico negotiating round in November, Guajardo said chief negotiators will meet in Washington in December, with the next full round then returning to Canada.

With assistance by Erik Schatzker, Doug Alexander and Jen Skerritt