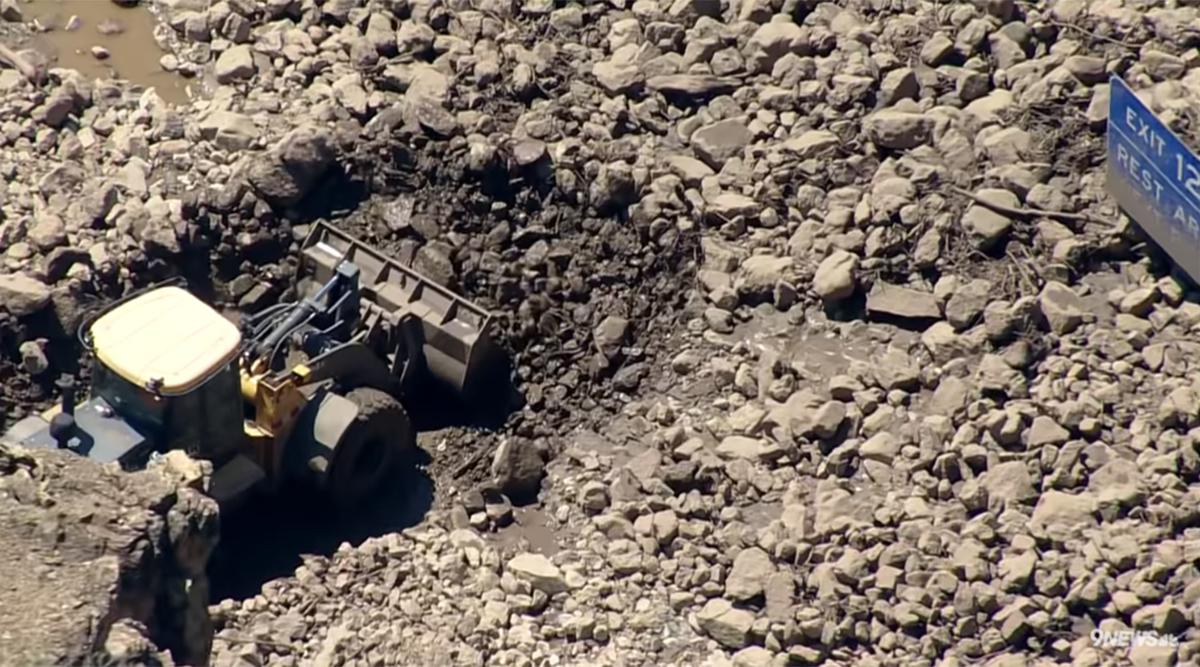 A bulldozer attempts to clear mud near a highway sign for an upcoming exit. (9News/YouTube)

I-70 is a major transportation corridor between the Rocky Mountains and the West Coast. An approximately 46-mile stretch of the interstate was closed, including Exit 87 (West Rifle), Exit 109 (Canyon Creek), Exit 116 (Glenwood Springs) and Exit 133 (Dotsero).

The mudslides left the interstate blocked with piles of boulders and logs, Colorado transportation officials said Aug. 1, as forecasters warned of more flash floods in the coming days across the Rocky Mountain and Great Basin regions.

(8/1) I-70 through Glenwood Canyon will continue to be closed due to extreme damage from the latest round of flooding Saturday night (7/31). Motorists advised to take northern alternate route (see map), and trucks traveling through take I-80. Go to https://t.co/bjBVfjLWOG. pic.twitter.com/LOJIV0rvh6 — Colorado Department of Transportation (CDOT) (@ColoradoDOT) August 1, 2021

The flood risk was elevated for many areas of the West where recent wildfires burned away vegetation and left hillsides more susceptible to erosion, the National Weather Service said.

There was no word on when the interstate might reopen after being pounded by flash floods over a three-day period. Lanes in both directions remained blocked by debris that flowed out of the burn scar from a wildfire last year in the Grizzly Creek area.

The torrent of rocks that came tumbling down the canyon’s steep walls smashed apart sections of the concrete roadway and sheared off a long section of steel guardrail, photos provided by state officials showed.

Crews were still assessing damage late Aug. 1. They had been working to clear the highway since July 29 when another flash flood hit July 31, forcing them to evacuate the area and causing even more damage.

“When we know exactly what the damage is, then we’ll have a better idea” on when it could reopen, said Colorado Department of Transportation spokesperson Tamara Rollison.

“It’s not just clearing the debris. There’s also the damage,” she said. “Our engineering staff have never seen anything like this before.”

More than 100 people had to spend the night on the highway July 29, including nearly 30 who took refuge in a tunnel following the mudslides in western Colorado. 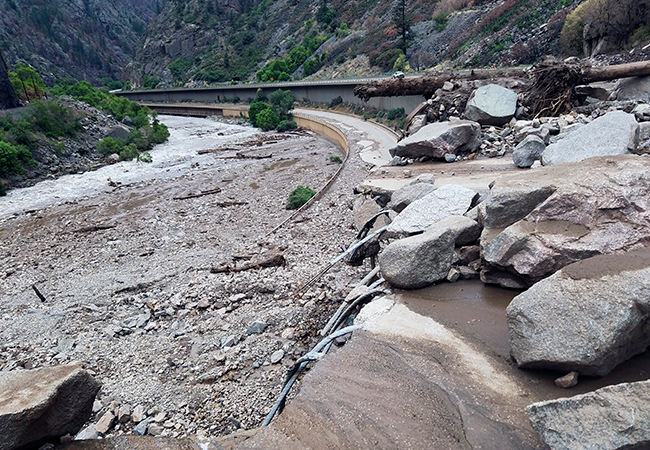 Mud and debris on U.S. Highway 6 on Aug. 1 west of Silver Plume, Colo. (Colorado Department of Transportation via Associated Press)