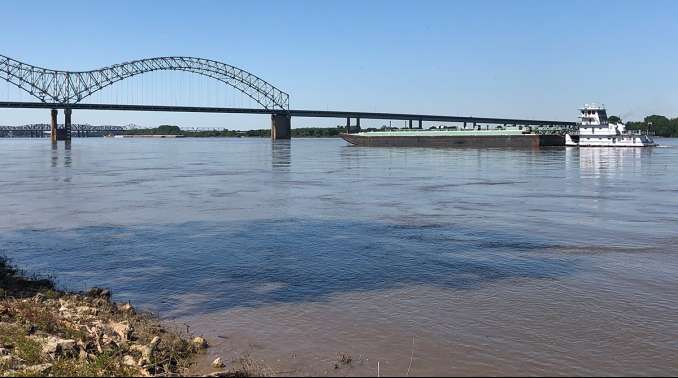 A boat hauling barges down the Mississippi River moves toward the Interstate 40 bridge May 14. (Adrian Sainz/Associated Press)

The U.S. Coast Guard has reopened the Mississippi River to maritime traffic, ending a shutdown that stranded more than 1,000 barges on the key conduit for agriculture exports.

The river reopened as of 9 a.m. CDT on May 14, according to the Coast Guard, providing relief to the queue of 62 vessels and 1,058 barges stranded on the north and south sides of the Interstate 40 Hernando DeSoto Bridge near Memphis, Tenn. The waterway had been closed since May 11 after a crack was found in the truss of the bridge.

The bridge itself remains closed to vehicles indefinitely. Traffic is being rerouted to Interstate 55 and the Memphis & Arkansas Bridge, about three miles south.

The Arkansas Trucking Association on May 14 estimated the closure would cost the trucking industry at least $2.4 million a day because of the longer routes to cross the river. The group used data provided by the American Transportation Research Institute.

Arkansas Trucking Association President Shannon Newton said the trip on the I-40 bridge between the two states averaged eight minutes. Since the I-40 bridge closure, trips on the I-55 bridge being used as the closest alternate route have averaged 84 minutes.

“Even if you’re looking at 6-8 weeks, that's an incredible expenditure that the industry can’t simply absorb," Newton said.

The crack in the bridge, found during a routine inspection, stranded barges and cut off the biggest route for U.S. agricultural exports when the critical waterway is at its busiest. Covered barges full of grain and soy float from U.S. farm country to terminals in the Gulf of Mexico, while crude oil, refined products and imported steel also travel through sections of the waterway.

“Based on information provided to us by the Tennessee Department of Transportation, the Coast Guard has determined that transit under the I-40 bridge is safe for maritime traffic,” said Coast Guard Capt. Ryan Rhodes, captain of the Port of Memphis. 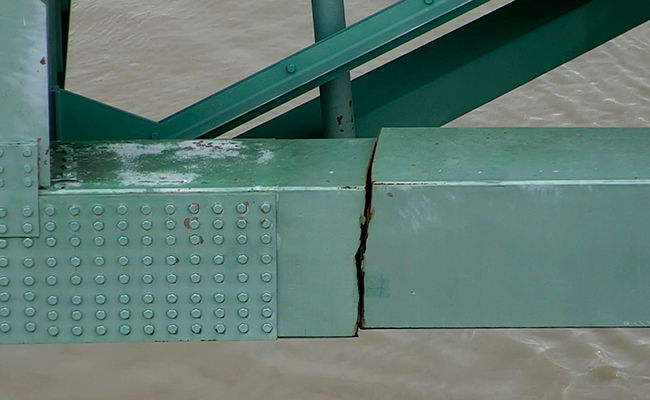 A crack is seen in a steel beam on the Interstate 40 bridge. (Tennessee Department of Transportation via Associated Press)

The reopening will be a “big help for American agriculture,” said Dan Basse, president of Chicago-based consultants AgResource, adding that he sees river operations returning to normal by the middle of next week.

“The record large U.S. summer corn export program is not threatened,” he said in an interview. There “should not be any big snags as long as two-way traffic can persist.”

“Any time you have a halt to the flow of barges, there will inevitably be another ‘clog’ that occurs downriver,” said Bevan Everett, risk management consultant and grains market analyst at StoneX, adding that at most the delay in movement may extend through the weekend.

“Since traffic is going to be open both ways, by Monday you probably won’t be able to tell this halt happened,” Everett said.