Workers said they did not receive their paychecks Nov. 23.

The surprised workers, who are part of Teamsters Local 120, found themselves picketing outside the company’s new sister location, Finish Line Express, in Maple Grove.

More than 30 workers on Nov. 23 picketed Finish Line Express, a business that union officials say is really the Lakeville Motor company operating under a different name and location.

In a letter to Teamsters spokesman Bill Wedebrand, Lakeville Motor owner and President Kevin Deming wrote: “Due to heavy financial losses, I have decided that effective [Nov. 19] Lakeville Motor Express Inc. shall cease all operations, close its business office and terminate all employees. Lakeville is out of cash and has no reserves to pay any amounts owed to employees or vendors at this time.” 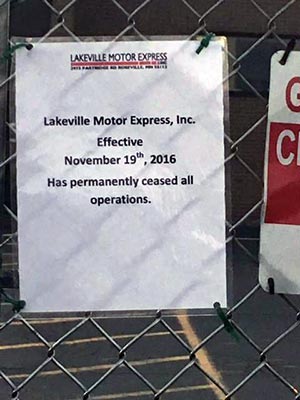 Terminated workers said they have seen Lakeville Motor’s former supervisors and terminal managers working in the truck yard at the Maple Grove location. They also said they saw Lakeville’s trucks and freight at the new site.

Both companies specialize in less-than-truckload freight and had contracts with customers such as John Deere, U-Line, appliance makers and grocers, picketing workers said.

“Now they are saying they won’t even pay their employees for work they had already done or benefits that have been accrued and are owed,” he said.

FLE Vice President Mike Sanford maintained there is no shared ownership between Finish Line Express and Lakeville Motor Express. He said FLE went into business shortly after it incorporated in May 2016. The company has 17 trucks, he said.

“We had nothing to do with the company closing,” Sanford said. “They asked us to pick up and deliver some freight. We don’t do all of it. … We’re a small company trying to do a job.”

Wedebrand said Sanford is one of several former executives with Lakeville Motor Express who are running the new trucking company.

The union will file grievances against the companies with the National Labor Relations Board, said Tom Erickson, president of Teamsters Local 120. “If what they did isn’t illegal, it should be. Period. This is not right. The union will pursue all legal avenues available to stop this kind of business strategy from working.”

The owners of Lakeville Motor Express did not return messages.

Lakeville Motor truck driver Ryan Lang was supposed to receive his $3,010 paycheck via direct deposit the day before Thanksgiving. There was no deposit.

His boss called him at home telling him not to come in to work that night because Lakeville Motor Express had locked the gates and he was out of a job. A few days later, his boss was seen working at the Finish Line Express site in Maple Grove, Lang said.

Lang joined Lakeville Motor out of high school and expected to one day retire from the company. Now, he’s unsure how to make it to the end of the month.

“I’ve got my mortgage and two car payments, and I owe money for my kids’ hockey. I don’t know how I am going to pay for it all if I don’t get my paycheck,” Lang said. “I was hoping to buy my kids Christmas presents on Black Friday, but I will not be able to do that because I don’t have funds.”

Lang and other picketing workers said they may not have been so upset if they had been given notice or offered the choice of working at the Maple Grove location.

Monte Hanson, spokesman for the Minnesota Department of Employment and Economic Development, said any employer laying off 100 workers must notify the state and give its workers 60 days’ notice. Employers with fewer than 100 workers “are encouraged to comply with the spirit of the law,” Hanson said.

Lakeville Motor Express did not file a WARN notice with the state, Hanson said. “We have people from DEED’s Dislocated Worker Program who are reaching out to both the company and the workers to get more details about what happened and to offer DEED’s services.”