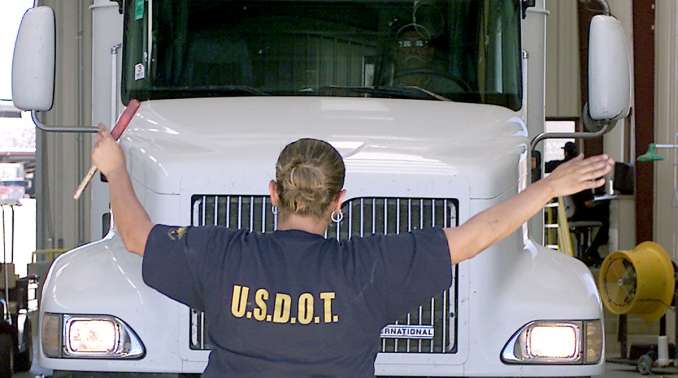 Safety inspector Anamarie Acevedo guides a truck into a inspection stall at the Mariposa Port of Entry in Nogales, Ariz. (John Miller/AP)

Mexico is redoubling its efforts to reach a NAFTA agreement with the U.S. and Canada by the end of August to increase certainty for investors and take the heat off incoming President Andres Manuel Lopez Obrador, according to three people familiar with the negotiations.

A deal next month would allow Lopez Obrador to focus on domestic priorities when he takes office Dec. 1, while shielding him from any potential criticism involving the outcome of the negotiations, according to the people, who asked not to be named discussing private talks. Republicans in November’s midterms could also tout the deal as proof that President Donald Trump made good on his 2016 presidential campaign pledge to fix or abandon NAFTA.

High-level NAFTA negotiations are set to resume the week of Julyh 23 after a two-month hiatus for Mexico’s July 1 presidential elections. While the nations had said progress was made earlier this year, the pact’s future hangs in doubt. Trump last week repeated his threat to pursue individual deals with Mexico and Canada, and the three nations still remain far apart on major points almost a year after the negotiations first began.

An agreement depends on U.S. willingness to back off proposals that are opposed by Mexico, Canada and American business groups, such as an automatic expiration of the deal after five years and the end of dispute resolution panels, according to the people. U.S. Trade Representative Robert Lighthizer hasn’t shown an openness to do that, the people said.

Canadian Foreign Minister Chrystia Freeland is scheduled to travel to Mexico City on July 25 to meet with officials from the current and incoming Mexican administrations, including Lopez Obrador. Mexican Economy Minister Ildefonso Guajardo said last week that he and his team plan to travel to Washington on July 26 to meet with Lighthizer.

The Mexican foreign ministry on July 21 said that Jesus Seade, named by Lopez Obrador as his chief NAFTA negotiator, will join the team on its trip to Washington. Seade said in an interview last month that he sees a deal as possible before the U.S. congressional election, and that the incoming president’s team fundamentally agrees with the nation’s current negotiating positions.

Guajardo last week alluded to the possibility of an August deal. In an interview with Radio Formula, he said that in closed-door meetings with the current and incoming governments earlier this month, U.S. officials including Secretary of State Mike Pompeo indicated a desire to have a deal in 45 days.

Mexico is moving ahead in its efforts to integrate with the economies of South America and make itself less dependent on the U.S., which bought 72% of the nation’s exports last year, according to data from the International Monetary Fund.

Pena Nieto on July 23 and July 24 is hosting Brazil’s Michel Temer, Argentina officials and other leaders for a summit focused on bridging the gaps between Latin America’s two major trade blocs: Mercosur, spearheaded by Brazil and Argentina; and the Pacific Alliance, which includes Mexico, Colombia, Peru and Chile.

While Trump said last week he may prioritize bilateral trade talks with Mexico over Canada, both the current and incoming Mexican administrations have expressed a preference to preserve a three-nation free-trade agreement.