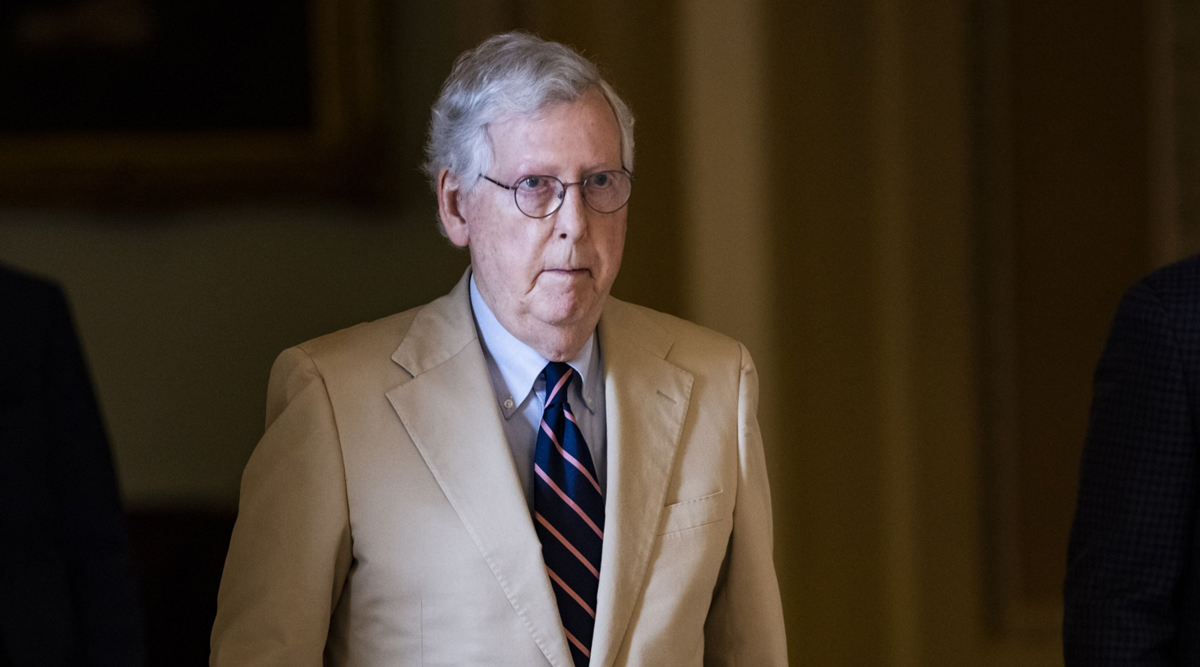 Senate GOP Leader Mitch McConnell demanded that President Joe Biden pressure Democratic congressional leaders to follow him in separating a bipartisan $579 billion infrastructure plan from a larger tax and spending bill that would carry out the rest of his economic agenda.

Biden “has appropriately de-linked a potential bipartisan infrastructure bill from the massive, unrelated tax-and-spend plans that Democrats want to pursue on a partisan basis,” McConnell said in a statement June 28. He said that Senate Majority Leader Chuck Schumer (D-N.Y.) and House Speaker Nancy Pelosi (D-Calif.) should follow suit and that Biden should “make sure they follow his lead.”

McConnell (R-Ky.) is attempting to head off an effort by Schumer and Pelosi to use a fast-track budget process to pass a Democrat-only bill with trillions of dollars in spending and tax hikes on the wealthy. Democrats aim to pass that at around the same time as a bipartisan deal on infrastructure. Republicans are trying to put pressure on Democratic moderates, chiefly Sens. Joe Manchin of West Virginia and Kyrsten Sinema of Arizona, whose votes would be pivotal on the broader package.

For Democratic leaders, moving both bills through nearly in tandem is key to passing the bipartisan bill in the two chambers because progressives don’t want to risk having their priorities — on climate, health and social programs — end up on the cutting-room floor while the bipartisan infrastructure plan becomes law.

When the president and a bipartisan group of senators presented an agreement on new infrastructure spending June 24, Biden suggested his signature on any infrastructure bill was contingent on Congress also passing the much larger tax and social-spending measure that Democrats are preparing. Pelosi also was explicit in conditioning passage of the infrastructure deal on enactment of the second package.

Biden and Democrats have made no secret in recent weeks that they planned to try to move the parts of their agenda that Republicans don’t support in tandem with the infrastructure plan. But the direct linkage drew protests from Republicans, who said it amounted to a veto threat from the president. Biden on June 26 issued a statement saying it “was certainly not my intent” to create the impression he was threatening to veto “the very plan I had just agreed to.”

That wasn’t enough for McConnell, who said that, “Unless Leader Schumer and Speaker Pelosi walk back their threats that they will refuse to send the president a bipartisan infrastructure bill unless they also separately pass trillions of dollars for unrelated tax hikes, wasteful spending and Green New Deal socialism, then President Biden’s walk-back of his veto threat would be a hollow gesture.”

McConnell’s statement drew a rebuke from Sen. Chris Murphy (D-Conn.), who said in a tweet that the top GOP leader’s “all-consuming motivation” is to sabotage Biden’s agenda.

Listen, Mitch McConnell’s all consuming motivation is to stop anything from passing when Democrats are in control.

Three Republican senators involved in the bipartisan talks said June 27 that Biden’s assurance that he isn’t linking the compromise plan to the larger bill — which Democrats will seek to move through a process known as budget reconciliation — will allow negotiations to move ahead.

Sen. Mitt Romney (R-Utah), one of that group, said on CNN that he was concerned about the president’s comments but thought “the waters have been calmed by what he said on [June 26].”

The infrastructure package needs some Republican support to win passage in the Senate, which is split 50-50 between the two political parties. Pelosi faces significant challenges getting both the infrastructure and the bigger package through the House, because she can lose no more than four Democratic votes to pass legislation that lacks GOP backing.

Speaking June 28 at an event in Louisville, Ky., McConnell again made clear he hasn’t endorsed the infrastructure plan, saying he needs to first see how much it will cost and that it is credibly paid for.

“I’d like to see us get there,” McConnell said of a bipartisan package.

He also said he opposes a Biden proposal for two years of free community college tuition, one of the elements Democrats want to include in the larger economic measure.

“I don’t think the federal government can afford to borrow enough money to provide free tuition,” he said. “It seems to me it’s an endless pit into which you would fall.”