NASHVILLE — Brad Vaughn, vice president of recruiting for Maverick Transportation of North Little Rock, Arkansas, was named the winner of Transport Topics’ first Recruiter of the Year award as the Recruitment and Retention Conference concluded here on Feb. 24.

Vaughn, who has been with Maverick for 16 years, was chosen over fellow finalists Josh Mecca of American Central Transport of Kansas City, Missouri, and Nick Williams of Paul Transportation of Tulsa, Oklahoma. 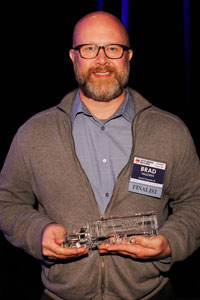 Vaughn said he focused last year on using video for recruiting as well as retaining drivers. Maverick has hired an in-house videographer who frequently uploads company content to its YouTube channel.

“That’s worked really well for us,” said Vaughn, who also extolled the positives of Maverick’s GroupMe app, which allows drivers to raise issues with company executives in real time, and its Facebook group for spouses, which has been so helpful for newcomers to the company and/or the industry.

The latter was a huge relief to a wife of a driver who was seriously injured on the job out of state. A fellow driver’s wife lived near the accident site and spent the night in the hospital with the injured driver constantly updating the frantic wife.

Mecca said ACT totally revamped its recruiting process in 2016 with a big data dive “to define who is an ACT driver” and reached out to its drivers via surveys to find out what was working and what wasn’t for them. By the end of the year, ACT had grown from 275 to 320 trucks as the female share of drivers tripled to just less than 10%.

“As recruiters, we are the gatekeepers to our companies,” Mecca said, noting that each recruiter rides along with a driver to fully understand the job which they offer to incoming candidates.

Mecca’s advice to recruiters is to “not be afraid to fail” in trying a strategy.

“What helped with that was that we developed relationships with [32] CDL schools that we didn’t have before,” Williams said.

Two third of the drivers hired by Paul last year were students, who now man 63 of the company’s 230 trucks. Paul liked the results so much that they brought one of the schools in-house to serve as its conduit for young talent.

“We don’t have a recruiting problem, we have a retention problem,” Williams said. “I think that’s [true] across the industry. There are some things we can’t control.”

To that end, Paul’s in-house analysis predicted its last 35 drivers to leave.

Maverick ranks No. 74 on the Transport Topics Top 100 list of the largest U.S. and Canadian for-hire carriers.