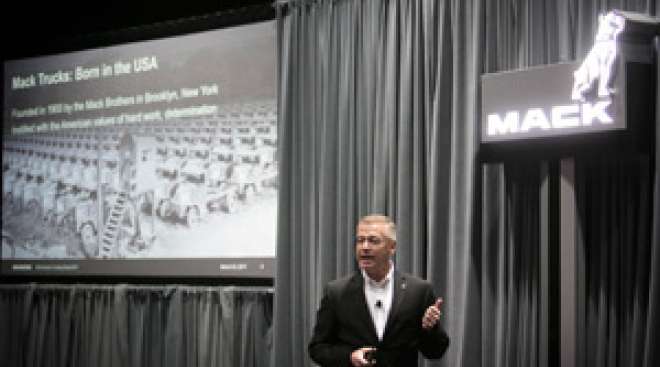 LOUISVILLE, Ky. — Emphasizing the growing role of truck connectivity, Mack Trucks said it was extending its telematics hardware as an option for its model year 2011 and newer trucks equipped with Mack engines, effective May 1.

Mack also discussed a new fuel-efficiency option for its Super Econodyne — one of several types of MP7 Mack engines — plus new niche axle and brake options at the Mid-America Trucking Show.

On the older trucks, telematics company Geotab is providing the same hardware to monitor vehicle codes as it does for Mack’s GuardDog Connect system on new trucks, said Roy Horton, director of product strategy at Mack.

“We don’t forget about our legacy vehicles as we are developing new technologies. Mack Trucks have been built to last, so we have a lot of legacy vehicles out there,” he said.

The legacy version will be available as a service contract through Mack dealerships.

“It is a simple and easy installation process. It may be too simple to say it’s plug-n-play, but it is very close to that,” he said.

At the same time, the device is fully transferable from truck to truck, Horton said.

More than 50,000 of its newest trucks are equipped with GuardDog Connect, he said.

At the same time, Mack introduced Super Econodyne Direct, a new fuel-saving option that combines Mack’s Super Econodyne concept with a direct drive version of the Mack mDRIVE automated manual transmission to boost fuel efficiency by up to 1%.

The gain is in addition to what Mack said is the 3% boost Super Econodyne already delivers on its own.

The fuel efficiency of direct drive transmissions comes from taking the torque from the input shaft in a straight line to the output shaft with no interruption or parasitic loss, he said.

Super Econodyne ratings are available with both its 11-liter MP7 and 13-liter MP8 engines, the company said.

Its Super Econodyne rating was previously only available with the overdrive version of the mDRIVE, Mack said. However, the recent release of numerically lower rear axle ratios allows it to use the direct drive variant.

Also, Mack said customers for its 6X2 lifter pusher axle now have the option of ordering it with an automatic standby mode and air disc brakes, Horton said.

When the ignition is off, Automatic Standby equalizes the suspension pressure, preventing the rear axle from being overloaded, Mack said.

With a 6X2 configuration, the suspension system automatically determines payload to lift or lower the foremost rear axle, Mack said. Customers include those with regional, bulk, tanker and liquid hauls.

The standby feature was developed with input from customers, he said.

The air disc brake option for the 6X2 lifter axles is designed “to improve stopping performance in some of those harsh conditions,” Horton said.